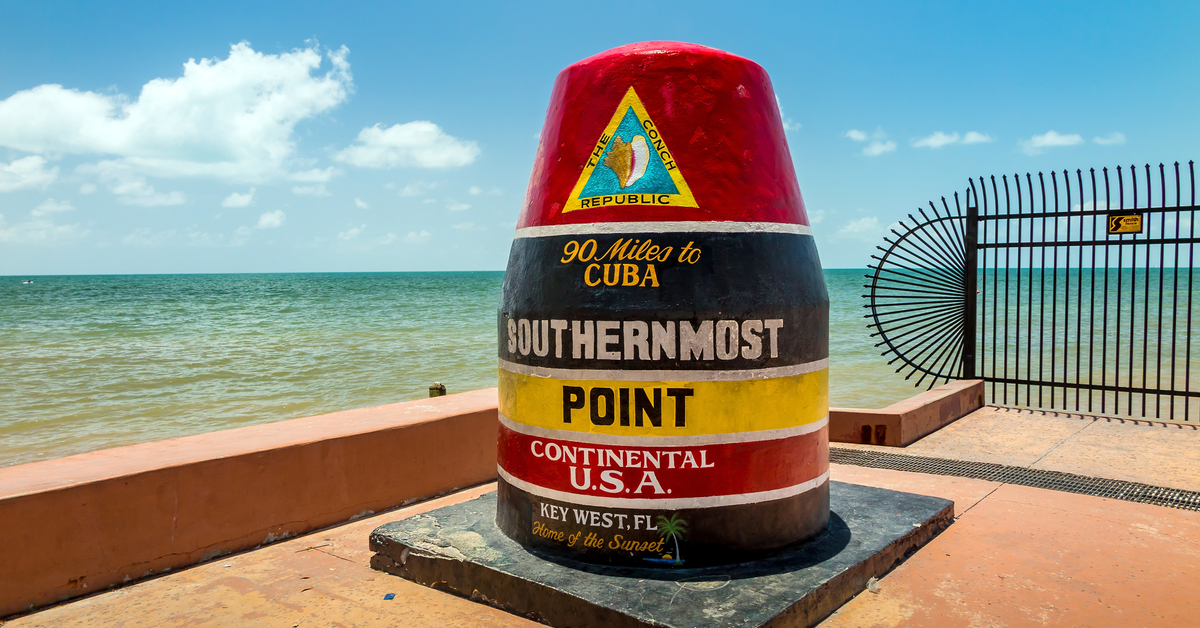 Florida is great for finding outdoor and back to nature adventures. Despite the explosive growth of the past few years, there is still plenty of wilderness to explore. Nothing more than in the Florida Keys… from Key Largo to Key West, there is no shortage of eco-travel adventures. The Keys are also known as the Conch Republic because, in a not-so-serious attempt, they seceded from the United States for a few days in 1982. There is even a flag.

Naturally, in an area surrounded by water, water adventures are available to you all along the Keys. Kayaking, paddleboards, fishing charters and kayak fishing, reef diving are all readily available in the Keys. If you’re a cyclist, there’s the Overseas Heritage Bike Trail, a paved trail that spans over 90 miles, following the route of the old railroad that connected Miami to Key West.

Everything in the Keys is measured by mile markers along US Highway 1, so follow us as we take you from Mile Marker 106 in Key Largo to Mile Marker 0 in Key West.

John Pennekamp Coral Reef State Park is located in Key Largo. Here you can dive into the offshore reef system. There are outfitters for scuba and snorkelers, and they take you to the best spots along the reef, which is located in 20 to 30 feet of water in most places.

By working with Florida Bay Outfitters, you can rent kayaks and paddleboards. The waters around the park are generally fairly calm, protected by the reef.

There is also a campground at Pennekamp for tents and motorhomes. Wear mosquito repellent and beware of aggressive raccoons stealing food from the campsite.

Across the road is Florida Bay, with shallow, protected waters. Kayak fishing is popular in the bay. Mangroves provide scenic kayaking and paddleboarding tours in the waters of the Everglades.

Key Largo Bike and Adventure Tours can provide you with cycling packages. It offers day to day tours in the Keys. Casual cyclists can stick to the heritage trail for a scenic day trip, separate from traffic. More experienced riders may choose to ride the US 1, some going all the way to Key West. It offers a Keys Bike Guide which gives you information on the various cycling routes and sightseeing packages.

Islamorada advertises itself as the “Sport Fishing Capital of the World,” with a large fleet of charters to take anglers on deep sea fishing trips in the Atlantic. Local restaurants will be happy to prepare your catch of the day.

There are several small state parks in Islamorada. Windley Key Fossil Reef Geological Park is actually an abandoned quarry, which was used to extract rock for some of the Overseas Railroad bridges. Lignumvitae Key Botanical State Park has a rainforest and hiking trails. Here you will find the monument to those who died in the catastrophic hurricane of 1935.

Indian Key Historic Park is located just off the Atlantic side of the highway. It’s a short kayak paddle to see what’s left of a once thriving village. Indian Key’s main activity was “demolition,” the rescue of boats and cargo stranded on the reefs. You can walk the streets and see the foundations of what were once homes and businesses. The island was abandoned after the 1935 hurricane.

Long Key State Park offers camping, hiking and boating. The park was originally a luxury fishing lodge which was a popular stop for the Overseas Railroad. The fishing camp was an attraction for the wealthy and famous who stopped by to try their luck at saltwater fishing. The camp and the railway line were washed away by the 1935 hurricane. The national park opened in 1969.

Duck Key is home to Hawk’s Cay Resort, a good point halfway along the Keys Freeway. The resort offers water sports like kayaking and paddle boarding. There are boat trips to the reef and sandbar just off the Atlantic. You can also sign up for saltwater fishing trips.

7. Mile Marker 56 – Head into the wilderness at Curry Hammock

Curry Hammock State Park is located on an uninhabited island on the Atlantic side of the United States 1. There are mangrove forests, hardwood hammocks, swamps and seagrass… a relatively unspoiled ecosystem. The park has a campsite, a beach and nature trails. There is a kayaking trail that takes paddlers through the mangroves and circles the entire island.

8. Mile Marker 50 – Maximize the marathon, the midpoint of the keys

Sombrero Beach is arguably the best sandy beach in the Keys. The Keys are primarily a coral rock formation and are not known for their sandy beaches. Sombrero is popular with locals, and visitors from out of town should know how to find it since it doesn’t get much publicity.

Marathon is another place to find deep sea fishing charters. You can also try your hand at kayak fishing, especially under the Seven Mile Bridge, as the fish swim with the tides coming and going between the Atlantic. and Florida Bay.

Seven Mile Bridge was built in the early 1900s as a long railroad trestle spanning the widest canal in the Keys. The railroad was destroyed by the 1935 hurricane, and work to replace it with the highway began under the Civilian Conservation Corp of the Great Depression era. Most of the workers were unemployed World War I veterans, and many perished in the hurricane. The modern bridge opened in 1982.

Bahia Honda State Park is located a short distance south of the Seven Mile Bridge. It has two campsites, one mainly for motorhomes, the other for tent campers. There is a long, gently sloping beach, ideal for families with young children. The water is shallow and protected by the offshore reef. You’ll also find the remains of the railway bridge that spans the Keys’ deepest channel. Visitors to the park can walk on the bridge to watch beautiful sunrises and sunsets.

Big Pine Key is home to the diminutive Key Deer, an endangered species, a species no larger than a greyhound dog and only found here. The highway has high fences to keep deer away from the road, but you can easily find deer grazing along neighborhood roads and streets outside of the main highway.

This area of ​​the Keys has some of the best kayaking trails. There are many small islands and mangrove forests on the bay of the island. The water here is very shallow in places so you need to be aware of the tide times to avoid getting stranded and having to drag your kayak to a deeper channel. I recommend the guide, Kayak The Keys by Kathleen Patton, University Press, available on Amazon.

South of Big Pine Key there are a number of Small Keys, some inhabited, some not. Kayaking in these areas is exceptional. Hire a guide and try the bay for snook, the popular game fish.

Boca Chica Key is home to Naval Air Station Key West, which is a premier air-to-air combat training station. The Navy has had a station on the Key dating back to the 1820s, when the primary mission was to stop piracy. Much of the Key is restricted, but there is a lightly used freeway on the Atlantic side of the Key that is suitable for biking.

Finally, you have arrived! Mile Marker 0 is the perfect spot for your ubiquitous Key West selfie photos. You will always find plenty of people fishing to get a feel for it.

Mallory Square is the place to go for sunsets, but be warned it gets crowded and has become too touristy. Here you will find beggar musicians, jugglers, waders and other exotic entertainment. Le Square even has its own website. The shops in Mallory Square include boutiques and art galleries. A lot has changed since the hippie days of the 70s.

Just because you’ve reached Mile Marker 0 doesn’t mean your adventures are over. Climb aboard the Freedom of the Yankees ferry to Key West and take the 3-hour boat ride to Fort Jefferson and Dry Tortugas National Park.

The Dry Tortugas are a chain of seven small islands about 70 miles west of Key West. It is home to Fort Jefferson, built as a defense fort for the southern waters in the 1840s. The fort was never used for defense by the military and later became a federal prison where Samuel Mudd, the medic who cared for John Wilkes Booth, was jailed.

Most people come for a day trip, which gives them barely a few hours to explore the fort and Garden Key, the island on which the fort is built. But there is another option. Camping is permitted on the island. It is very primitive, without water, without electricity. You should pack all the food, water, and camping supplies you need.

Even if you are only doing a day trip, bring plenty of water. There are none on the island. This is why they are called the DRY Tortugas.

The Florida Keys are the getaway to the tropical islands of America. The best way to get there is to drive on US 1 from the Upper Keys to Key West. Don’t try to make the trip in one day. Stop in often, take in all that Keys has to offer. My recommendation is, if you have a week’s vacation, spend 2 days in each of the Upper and Middle Keys, and 3 days in Key West including a day trip to Dry Tortugas.

Many adventures await visitors to the Florida Keys: