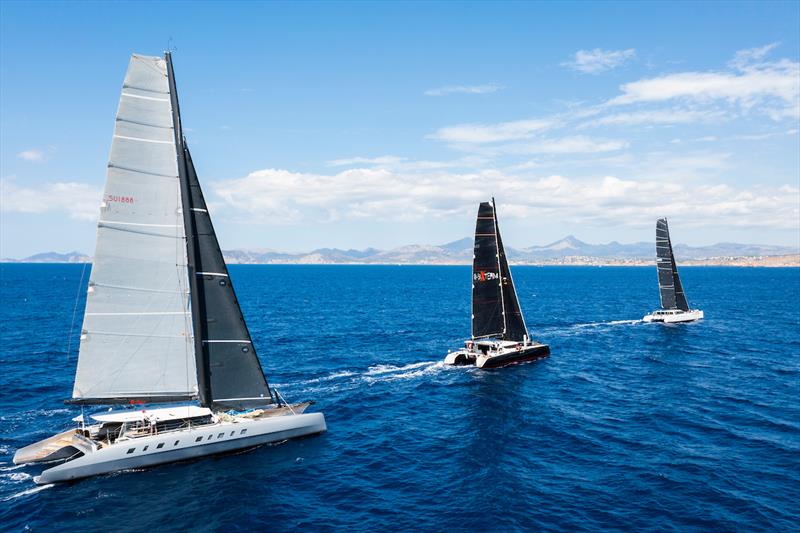 High performance multihull racing returned to southern Mallorcan waters on Friday with the opening day of the 2022 Multihull Cup.

The fifth edition of the exclusive regatta for 50’+ performance cruising multihulls clearly demonstrated that the appetite for competitive sailing has not diminished with tight racing on the water.

In the end, North Sails race day turned out to be a day of mixed fortunes – which was not the case for defending champion Allegra. Pressed hard on the water throughout the course, confusion at the finish line saw any chance of winning the race disappear when Coco de Mer took victory.

There was a misunderstanding about the location of the committee boat, but no hard feelings and it was a great day of sailing. said Coco de Mer tactician Tim Thubron. “I think we had them anyway,”

“There were cracking conditions with 15 knots on the course, although it did get a bit lighter in the Bay of Palma with the wind dropping and then sway northeast to south – overall, although it was challenging and fun with an interesting course,” he added.

At the start, Coco de Mer led the way, with the 66′ Gunboat crossing the line 10 seconds ahead of the competition despite a technical glitch that kept it away from the start area.

Allegra, the 84′ flyer designed by Nigel Irens, took advantage of her length at the waterline to gradually rework the leader as she passed Cap de Cala Figuera towards the first buoy at the southern end of the Bay of Palma.

On the way back to the finish, the fleet flew over the islands at the tip of the Punta del Toro peninsula – with Coco de Mer making the most of local knowledge on board to cut the corner between two of them. them.

Meanwhile, the Polish crew R-Six – the HH Catamarans-built HH66, winner of the first-ever Multihull Cup in 2016 – had opted for the right side of the course on the first leg. A gesture that was to result in a well-deserved second place once the spray subsided.

“It was a very difficult day with the wind going up and down,” said skipper and owner Robert Szustkowski. “The weather was absolutely crazy with a lot of sail changes, but we had a great time and a good result.

“We have been to all the Multihull Cups, and tonight we are celebrating and then thinking about the next two days,” he added.

After racing, Allegra generously conceded that its Morrelli & Melvin-designed rivals got the better of them. “Yeah, they were ahead of us on handicap without a doubt I think,” said Helena Darvelid.

“We were ahead of Coco and we got away but they caught up to us, it was a real bungee yo-yo type day which is great fun when you’re racing. We got stuck in a wind hole on the back leg for the finish, and Coco closed right away.”

And she added: “I hope we can get back into the swing of things over the next two days. Obviously, we want to keep our title in the Multihull Cup.

Returning yachts were greeted on the quayside by coolers full of cold beers donated by North Sails, the company also hosting the Friday night barbecue party.

Meanwhile, before and after the race, crews and spectators were able to refill their reusable Ocean bottles at the Clean Waves water station and sponsored by Rigging Projects – a highly visible demonstration of the Multihull Cup’s commitment to sustainability, and one of the reasons the event recently received Silver Certification from Sailors for the Sea Clean Regatta. The significant contribution made by Port Adriano itself, Save the Med and Silent-Yachts, builder of solar-powered catamarans, was also a factor.

Racing continues in the 2022 Multihull Cup on Saturday and Sunday.