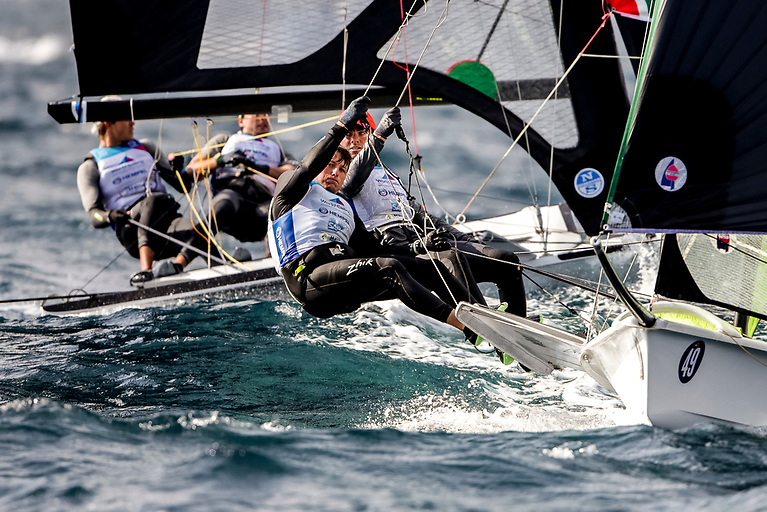 After a three-hour delay ashore waiting for the wind to pick up, the race began across the Bay of Palma, but it wasn’t until late afternoon that the 49er event began on the East Coast.

Dickson and Waddilove played the wind shifts well in the opening race and scored sixth. However, in the race following an incident at the start line involving two other countries, they placed tenth for that race, their worst finish in the series to date which they brushed aside.

This incident at the start line was the subject of a protest committee hearing and could still make their disallowed score much higher depending on the outcome. The pair, however, qualified for the Gold fleet regardless.

Royal Cork sailors Seafra Guilfoyle and Johnny Durcan achieved their worst finish of the series so far with an 18th place but followed it with an eighth but were unable to cross the threshold of the Gold Fleet on this, only their second major regatta together as a new couple.

Frenchmen Erwan Fischer and Clement Pequin continue to lead the men’s 49er fleet despite failing the first yellow group race before bouncing back with a second-place finish in the next. “It was lighter today, so more tactical,” said Fischer. “We missed a few opportunities in the first race, but overall we’re very happy with how things are going. The forecast looks good for tomorrow and it looks a bit stronger, which is always fun. To be honest, we’re just happy to be back racing.

Saskia Tidey in the 49er FX

Parish’s Saskia Tidey and her new teammate Freya Black continue a steady display in their first event in a new campaign for Team GB. The duo are seventh out of 53 in the 49er Fx