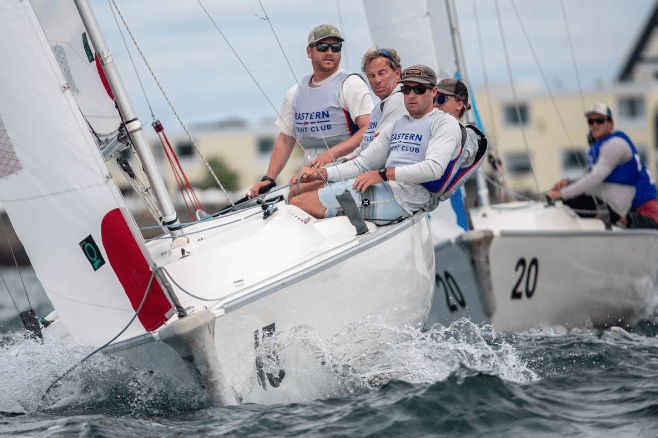 As was the case last year, Eastern’s victory was the result of hard work and steady progression through the ranks of the keelboat racing team.

“Ten years ago, Eastern didn’t race as a team,” says Clinton Hayes, the Eastern Yacht Club’s team captain. “I remember when we got our first invitation to the Morgan, and we finished last, then second to last. We just put a lot of effort into this event. The New York Yacht Club pulls out all the stops to make this a world-class event, which is why all of us sailors try so hard and show up year after year.

While the race committee ran just under 100 races over the three days of the Morgan Cup, it wasn’t easy. Light and temperamental winds made the first day of the regatta quite difficult as the race committee had to keep adjusting the course and the competitors tried to stay focused during long delays.

“Day one was a very long day with a long delay,” says Hayes. “Everyone came out of the water and we were totally burned. The sun and the wait make it really difficult.

“A big thing was just avoiding mistakes,” says Hayes. “In light airs people tend to pass the team race, a lot of people get passed. So we focused on overtaking other boats, sailing really well, really fast, especially in downwind conditions, and avoiding those stupid, unforced mistakes.

Smoother sailing on Day 2 and early Day 3 put Eastern in a strong position after two full round robins, with 14 wins, from 18 runs, and a two-point advantage over the three teams tied for the second place. With the typical Newport sea breeze finally setting in, these four teams made a single round robin for the Golden Fleet to close out the regatta.

Corinthian beat Eastern in the opening race of the Gold Round Robin to cut Eastern’s lead to a single point. And since Corinthian had beaten Eastern each of the three times the two teams had sailed against each other – and therefore controlled the tiebreaker – there was effectively no room for error.

“We knew it was tight,” Hayes said of the standings ahead of the final races. “We didn’t look at the exact scores, we just assumed we had to win the majority of the races in the [Gold Fleet Round Robin]. All three races were barn burners, really tight. We were lucky to come away with two out of three.

Many Morgan Cup competitors will return on Friday for the Hinman Trophy, for which skippers must be over 45 and crew over 40. The Grandmasters team race – skippers aged 60 or over and crews aged 50 or over – will take place on August 26 for 28.

Like Newport Buzz? We depend on the generosity of readers like you who support us, to help us in our mission to keep you informed and entertained with local and independent news and content. We really appreciate your trust and support!