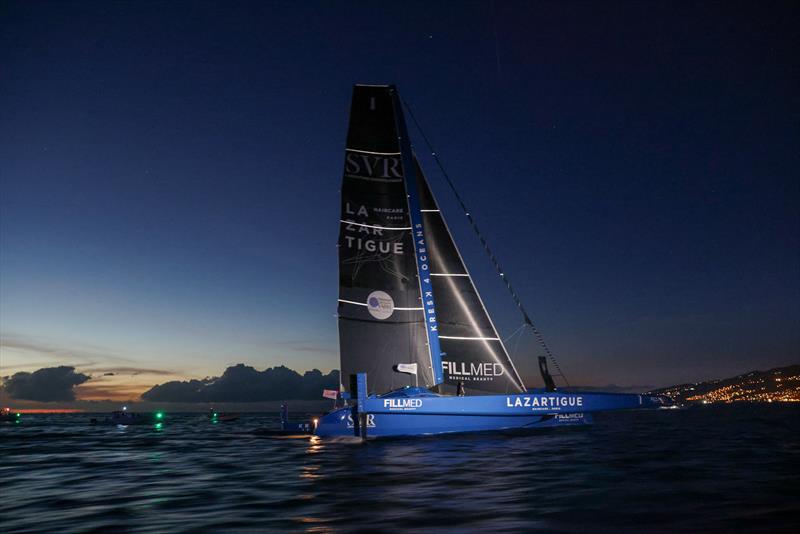 Second in the Transat Jacques Vabre, the Trimaran SVR-Lazartigue, launched only in July, has demonstrated its enormous potential. On board the boat, FranÃ§ois Gabart and Tom Laperche experienced incredible sensations. The future is very promising for this new boat, where flying over the water offers good prospects.

FranÃ§ois Gabart: “I cried at the bar, it was so beautiful” Tom Laperche: “It was magic”

Of course, there are the numbers. Those who will fill the notebooks of statisticians. 2, like this fantastic second place snatched in the last 48 hours of the Transat Jacques Vabre after an incredible comeback, which saw the Trimaran SVR-Lazartigue make up a delay of more than 100 miles. 16 days, 9 hours 46 minutes and 11 seconds to cover 9,333.08 miles (17,285 km) indicates the race time between Le Havre and Fort-de-France (7,500 theoretical miles), at an average speed of 23, 7 knots (43.9 km / h). As well as 816 miles, the record distance covered in 24 hours in the event. There is a large amount of other data, which will also be analyzed and dissected in the coming weeks. But above all, it is the sensations and the sense of the promise that reign.

On board their seaplane, FranÃ§ois Gabart and Tom Laperche lived two incredibly intense weeks. â€œOn the last day, I cried at the helm, it was so beautiful, admits the skipper at the finish, remembering the last hours of the race. It was incredibly fast and the sensations are extraordinary. These boats really fly on water. . And you can feel the insane amount of potential. ”

A magical moment, among many others. For us, being at the start of the race was a victory in itself, recalls FranÃ§ois Gabart. We have learned a lot about how this boat works since it was launched on July 22. Frankly, we didn’t have any issues, which, objectively, is a surprise. I didn’t think that with the little sailing we did before this race, we would be able to cover that many miles without a problem. We sailed with the toolkit thinking we would need it, but in the end there was next to nothing. The team did a fantastic job and I am very proud of it. It’s important to say that we had pretty good conditions, but we did go a few miles. With our new boat, we didn’t leave Le Havre thinking it would be easy. I expected to have technical problems. All teams are growing and learning, â€with some fantastic promises and a series of major challenges ahead as well. â€œWe didn’t push the boat hard, the skipper is quick to explain. We were frugal with her and we were careful with her. And yet, it is clear that it is already fast. Everything is set to do some great things over the next few years. These boats are extraordinary. They always will be, but they will always be tough boats too. In 5, 10, 15 years, they will always be like that, because they will push the limits of the oceans. We’ll always be a bit borderline, but I’ve always liked complex things. You get a lot of pleasure from it. When we manage to set everything correctly, which is not easy and it is not within everyone’s reach, it becomes great to navigate with this degree of complexity. That’s what we’re looking for, otherwise we wouldn’t be racing offshore. his young teammate on two occasions since the podium of the Solitaire du Figaro. â€œI have the feeling that Tom will continue to gain strength in ocean racing,â€ says the skipper. It was a great pleasure to sail with him. On a human level, the experience went incredibly well. Everything was simple. He is comfortable on the boat. I also sailed an Ultimate with some incredibly talented people. These boats remain complicated and surprising. As familiar as we know them, we are never completely at ease on these boats. It’s quite surprising how comfortable Tom is on a boat in such a short time. It’s wonderful to see. ”

It is an intense and valuable experience for the next stage of his career. â€œThere are lots of lessons to be learned from that,â€ admits the young sailor. Starting with all the advice from FranÃ§ois. You learn to manage a boat like this over time. Sailing on these boats requires concentration and thought. It’s incredibly powerful. . This is sport at its best, it is the pinnacle of ocean racing. I also learned that I really like the multihull and the speed. Sailing is a great sport with many disciplines. However, when you think back to what you’ve experienced, ocean racing is the holy grail in terms of dueling, speed, physical and mental engagement. To that, beyond the athlete, there is the human, and everything that has happened between us.

If Tom’s future seems full of promise, this Transat Jacques Vabre will always have a special place in his career. ” It was magical. I experienced something incredible, he beams. When I was little, I had pictures of multihulls, dreams of ocean racing and I just experienced it all in the flesh. That’s wonderful. launch a boat in July and take second place in a transatlantic race. It’s great for the future of the project. I will remember from this transatlantic full of privileged moments, the joy of being able to make the most of the moments spent sliding and flying. We had a fabulous trip.

While the race took place under ideal conditions on Sunday, November 7, off Le Havre, the start of the event allowed the Ultimes to climb directly to the head of the fleet. Rounding Brittany, the Trimaran SVR-Lazartigue occupied the first place, although hunted by its four adversaries less than 10 miles behind.

A Bay of Biscay in a convoy

Dreaded for its typical November menu, the Bay of Biscay surprised all competitors by the lack of wind. The boats were nailed to the circuit, looking for the slightest sniff of the breeze. Very close to each other, the five seaplanes were forced to sit down, enjoying the spectacle created by the schools of dolphins who came to escort them in their path. The Trimaran SVR-Lazartigue was in pole position for several hours, while the other boats followed suit.

Calmed down in the doldrums

On the way to the Trindade waypoint, off Rio, the Trimaran SVR-Lazartigue is nearly 500 miles behind the lead boat and more than 100 miles behind Banque Populaire XI, second in the fleet. The deficit would even extend to 120 miles before the start of the Atlantic climb. FranÃ§ois Gabart and Tom Laperche set themselves the record for the longest distance covered in 24 hours on the Transat Jacques Vabre, totaling 816 miles and returning to the battle for second place.

By the passage of the SÃ£o Pedro e SÃ£o Paolo mark, their deficit had already reduced to 80 miles. However, 1000 miles from the finish in Martinique, they were more than 130 miles behind the second boat. At that point, they started their comeback. 500 miles from Fort-de-France, the Trimaran SVR-Lazartigue is only 20 miles from the Maxi Edmond de Rothschild. FranÃ§ois Gabart and Tom Laperche improved their game with the maneuvers and managed to slip into second place 100 miles from the finish and never let go from that point on. After returning to Concarneau and the MerConcept workshops for a revision and a refit, the 12th edition of the Route du Rhum, between Saint Malo and Guadeloupe, is the next big challenge that awaits the Trimaran SVR-Lazartigue. Another transatlantic therefore and a scheduled start for November 6, 2022. Capped at the post of only seven minutes by Francis Joyon during the last edition in 2018, FranÃ§ois Gabart, winner of the event in the Imoca category in 2014, carrying the record of the test at boot, he will be delighted to add another line to his list of achievements. The next step, in 2023, will be the single-handed round-the-world record campaign before facing the Jules Verne Trophy crewed, non-stop and unassisted in 2024. â€œWe are all delighted with the challenges ahead, starting with the Route du Rhum, says FranÃ§ois Gabart. Obviously, it won’t be easy, otherwise everyone would and it wouldn’t be the Ultimate class.

The Kresk group proud of this start to the race

In all the companies that make up the KRESK group, there has been a real enthusiasm for the Transat Jacques Vabre. From regular glances at the cartography to see how the Trimaran SVR-Lazartigue was doing and what was happening in the race, to encouraging messages for the crew, a new passion was born. At the forefront of the world of ocean racing since its engagement alongside FranÃ§ois Gabart, the entire Kresk group has fully benefited from this first experience. â€œWe are absolutely delighted with the result of this first race, enthuses Didier Tabary, founder and president of the Kresk group. It demonstrates the reliability of the boat, the quality of construction and its incredible potential. Note that the Trimaran SVR LAZARTIGUE also holds the record for the 24 hours of this transatlantic (816 miles). The Kresk group and all the teams that make up the SVR, Lazartigue and FillMed brands are very proud to have seen FranÃ§ois Gabart and Tom Laperche wear the flags of their brands. Throughout the race, the two skippers showed a lot of commitment and courage, as well as a real complicity and this direct return to Martinique proves to what extent they are extraordinary competitors! in the Ultimate class with a boat launched a little over 3 months ago, it’s really something to celebrate. Thank you to all the teams who made this result possible.