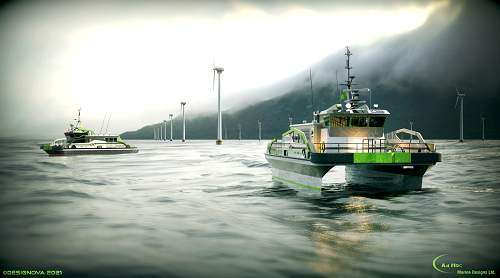 It was designed by AHMD who has over 30 years of experience in designing all kinds of high speed vessels including all the naval architecture design of the previous range of CTV South Boats catamarans built by Aluminum Marine. Consultants (AMC).

The ship is designed to align with today’s future as well as the UK government’s own vision for the future, with the phasing out of Internal Combustion Engines (ICEs) in the maritime sector from by 2025, and to be completely phased out by 2030.
Part of the future vision is the creation of a new style and a new livery to live up to this ambition. The Faraday Class ePTV styling and livery was designed by DESIGNOVA to stand out from the crowd. AHMD previously collaborated with DESIGNOVA on the design of the 100m unibody stabilized power arch, for PowerX, using the creativity of J. David Weiss at DESIGNOVA to provide their vision. The Power Ark is a vessel transporting energy via batteries to and from the wind farm.

The existing model of a rapid port-to-field CTV that is stretched to the limit by the round 2 and 3 wind farm going further offshore is not viable when using an ICE for its power. The whole design and operating ‘model’ has to change. There are far too many attempts to insert a square peg into a round hole – this is simply a case of denial. Which energy company would continue to offer contracts to a company using ICE when its own operating mode is to be 100% renewal and green? So the whole model requires a tectonic shift by changing the way the ship is designed and operated – this can only be achieved by looking to the future, and it is 100% electric. Revolutions start with a simple seed of thought, not a flurry of show and bravado according to AHMD.

The Faraday class aims to fulfill this role using Sterling Batteries. The power density of batteries is known to be around 50 to 1 compared to an ICE, but this should not be seen as an obstacle, but as an opportunity according to AHMD. The company has declared the opportunity to change the narrative from ICE to electric, knowing that with each passing year this power density will slowly decrease, thus making an electric whole not only possible, becoming the norm, as soon as possible. A bit like Moore’s law of transistors.

The vessel is designed to have 1 ton equal to approximately 9-10 knots per hour. The concept is also being considered to have an energy storage system (ESS) or batteries that can be quickly replaced by a simple lift inside and outside, has been satisfied. The AHMD said its goal of having a personnel transfer vessel that can be 100% electric, using batteries, carefully selecting the right type and size that makes ePTV profitable, has also been met.

The Faraday-class ePTV is one of four daughter ships that can be docked on the deck of its mothership. During the night, the batteries are charged and / or replaced. When duty calls, the ePTV is removed from the mothership and launched into the field. The ePTV then has approximately 4 to 5 hours of battery life, depending on its functions. When the charge is low, it is now possible to recharge directly from the tower, or simply return to the mothership where the ePTV docks at the stern, allowing depleted batteries to be lifted and replaced with fully charged batteries in minutes. The mothership is able to create its own electricity from its own wind turbines where it is not possible to connect to the cables of the wind farm. It also carries diesel / alternative fuel generators for redundancy / emergency relief.

The mothership is the hotel and the charging station and does not transfer technicians to the tower. The mothership is prowling around the area of â€‹â€‹operations for the day. This aims to increase the level of security of technicians compared to existing SOV operations. In an emergency, such as a thunderstorm, a maximum of 12 technicians (on the tower) can quickly disembark to the ePTV.

The Faraday class ePTV is available exclusively from AMC on the Isle of Wight, with AHMD / AMC being part of a consortium that won the Department of Transport grant for a clean navy. The other members are: MJR power, Turbulent Marine Simulations, Stirling Batteries and ORE Catapult. This is currently being designed by all parts of the consortium, ready for the next chapter. The next generationâ€¦ is here now, today.

The Barracuda project is part of the Clean Maritime Demonstration Competition, funded by the Department of Transport and organized in partnership with Innovate UK.

Announced in March 2020 and part of Prime Minister Boris Johnson’s ten-point plan to position the UK at the forefront of green shipbuilding and maritime technology, the Clean Maritime Demonstration Competition is an investment Â£ 20million from the government alongside an additional Â£ 10million. industry to reduce emissions from the maritime sector. The program supports 55 projects across the UK, including projects in Scotland, Northern Ireland and South West to North East England. As noted in the Clean Maritime Plan (2019), government funding has been used to support early stage research into marine cleanliness. The program will be used to support the research, design and development of zero emission technologies and infrastructure solutions for maritime transport and to accelerate decarbonization in the sector.

For everything you need to know about the strategies used to support the construction and operation and maintenance of offshore wind farms, current and future, including the supply and demand for service and accommodation vessels, and ‘helicopters, Click here.

The rain makes life difficult, but a lot of fish