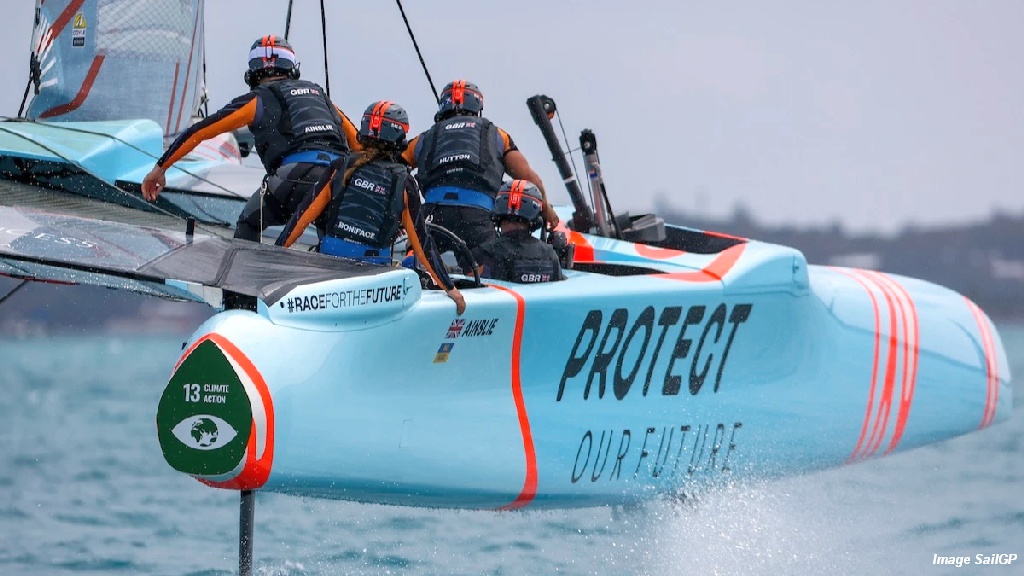 SailGP commentators are split on whether Ainslie’s SailGP team should abandon the soft and gentle approach they have taken so far this season and revert to a more aggressive starting line technique if she wants to pick up a win at Plymouth this weekend.

Ainslie has only managed to win one SailGP event in nine starts – over a year ago in Bermuda – and trails Tom Slingsby and the Australian team with 11 wins, and Nathan Outteridge at the helm of the Japanese team with three wins.

Ainslie has taken a less aggressive approach this season, earning second and third place finishes at Bermuda and Chicago and currently sitting tied for second overall with Canada.

Now, at his home Grand Prix in Plymouth, he has the chance to register a first home victory in the British GP and break Slingsby’s five-race winning streak.

Not only would that be good for Ainslie and the British team, but it would rejuvenate a SailGP circuit where the clutch of new teams have yet to get to grips with tricky foiling multihulls.

“I think he really needs to beat Tom Slingsby,” said Stevie Morrison, “He hasn’t won against Australia since Bermuda in season 2 so it’s starting to get long between meals”.

“He must protect the waters of the house,” said Harris. “I think at Plymouth he’ll want to take a chance – everyone will want to see Sir Ben in action and if you’re a Sir with five Olympic medals you better bring it.”

Meanwhile, Emily Nagel, who sailed extensively at Plymouth, said the key would be to ensure an aggressive start down the line.

“Plymouth is a sneaky little racecourse, and you have to get out of the line aggressively and score one first,” she says. “There’s not a lot of space behind the starting box, so the teams that come out strong are going to be strong.”

This “risk and reward” approach, previously used by Ainslie in the SailGP and America’s Cup events of the 2015 and 2016 series, led to a number of controversial incidents in SailGP Season 2.

Culminating with Ainslie having to lend his F50 to Nathan Outteridge after damaging the Japanese team’s boat, and leading to the overhaul of the events penalty point system to prevent future hull damage and possible injury to the crew.

Freddie Carr, who recently re-signed with INEOS Britannia from Ainslie for his third successive campaign with the British Challenger, disagrees that there will be pressure on the Ainslie squad to to perform in front of local audiences.

He expected the team to be successful, but would not put pressure on themselves just because they were sailing in Plymouth.

That may be an insider’s view on the race box, but with a bumper crowd expected to watch the race from Plymouth Hoe in search of a British win, the heat of the moment could trigger the famous “Ainslie’s victory at all costs”. attitude and all bets are off.

As Ainslie admits. . . “It’s ‘hard enough’ to ‘look back on 20+ years of racing experience’ to effect ‘a fundamental shift in your approach’,” adding “You don’t get many chances to race at home at this kind of level and it’s very special to race in front of a home crowd.”

While going into that final $1,000,000 season-ending race and eventually winning, that’s the overall goal. . . In Plymouth this weekend, getting to the final of the three-boat race, dominated by Tom Slingsby’s Australia in Chicago and Bermuda, and finally securing a SailGP victory on local waters will be the goal.

SailGP Plymouth – Time for Ainslie to step up their game!