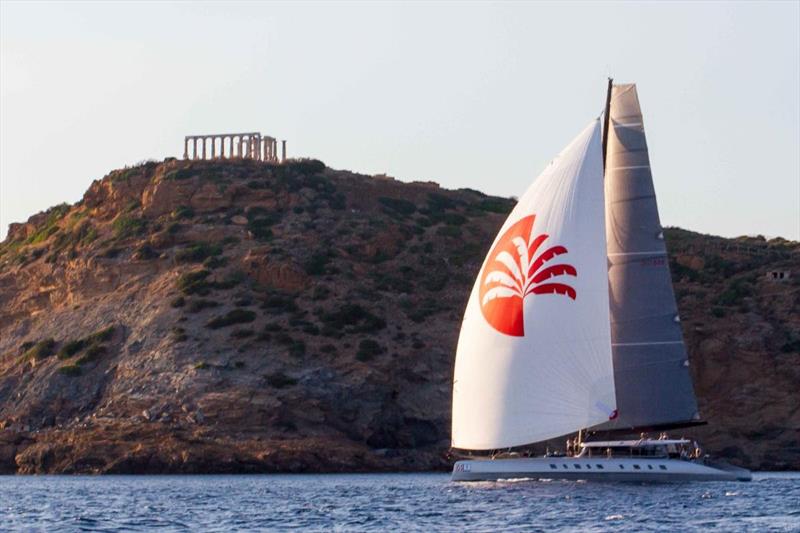 Allegra first to finish in the Aegean 600

Allegra first to finish in the Aegean 600

At an average speed of 11.3 knots around the race course, the 78-foot performance luxury catamaran designed by Nigel Irens, ALLEGRA (SUI), crossed the finish line at 19:36:02 local time , during the second edition of the Hellenic Offshore Racing Club. (HORC) AEGEAN 600. The team’s elapsed time of 53H 36M 02S sets a course record for multihulls in this annual 605-mile race.

Adrian Keller being interviewed aboard his 78ft catamaran ALLEGRA after finishing first, “The race was very interesting, very challenging and quite different from other 600 races we have done,” Keller said. “The Greek Islands are difficult not only because of the course you take but also the very different wind conditions you encounter, from zero to 30 knots…we had it all. We were parked for five hours but from a other side we reached over 27 knots in boat speed.Our boat is very well adapted to high winds so we had a great time, we really enjoyed it.

Meanwhile, the remaining boats in the fleet are also making their way around the race track thanks to the force of the strong North West Meltemi wind which blows at 12-25 knots depending on the area of ​​the course.

Next to finish is Phillip Kadelbach’s canting keel Elliot 52 (GER) RAFALE, around 100 miles behind ALLEGRO and at their current average speed of around 11 knots they will be expected at the finish line well before the dawn tomorrow assuming the wind holds through the night.

This performance puts them well positioned not only to win in the ORC and IRC ratings, but also within reach to break the monohull course record of 71H 54M 00S set last year by the Farr/Felci 70 ATALANTA II. they would only have to finish before 2:09:00 p.m. local time to achieve this feat as well.

However, it is not certain that the RAFALE will win this prize: just 14 miles behind – at these speeds barely a little over an hour’s navigation – are two boats which are sailing at approximately the same speed and could constitute a threat in the event of be a setback in the progression of the RAFALE. Jean-Philippe Blancpain (ITA) Vismara Mills 62 LEAPS AND BOUNDS 2 (ITA) and Gregor Stimpfl’s (ITA) Scuderia 65 HAGAR V are neck and neck within two miles of each other, and no doubt will will push hard in the remaining hours of racing.

At these speeds it is only 10 minutes difference after 500 miles of navigation. And regardless of the outcome of the IRC and ORC class scoring, LEAPS AND BOUNDS 2 and HAGAR V are also vying for the top prize of the Maxi class scoring.

The IRC and ORC Double Handed class is led by Gerasimos Petratos and Evi Delidou sailing their Dehler 30 AETHER (GRE) with a 13 mile lead around the north corner of Rhodes over nearest rival PNEUMA (POL), Andrejz Rozycki and Adam Skomski’s JPK. 10:30 a.m.

However, on corrected time, the Polish team is ahead, but by only 28 minutes… and that’s with another 290 miles to go until the finish.

So, for the ALLEGRA team, this evening will be devoted to reconnecting with dry land here at Olympic Marine, while for everyone else, another night of sailing awaits them.

Under clear skies, a moderate breeze and with a full moon to help light the way, for most it will be yet another night of champagne sailing in the AEGEAN 600.

Today’s race analysis video with SEAHORSE Magazine’s Dobbs Davis provides insight into the race based on weather conditions and position data from the YB tracker fleet:


The link for the YB tracking system can be found at aegean600.com/tracking.

On the Water: It’s been a hot week on the water | News, Sports, Jobs