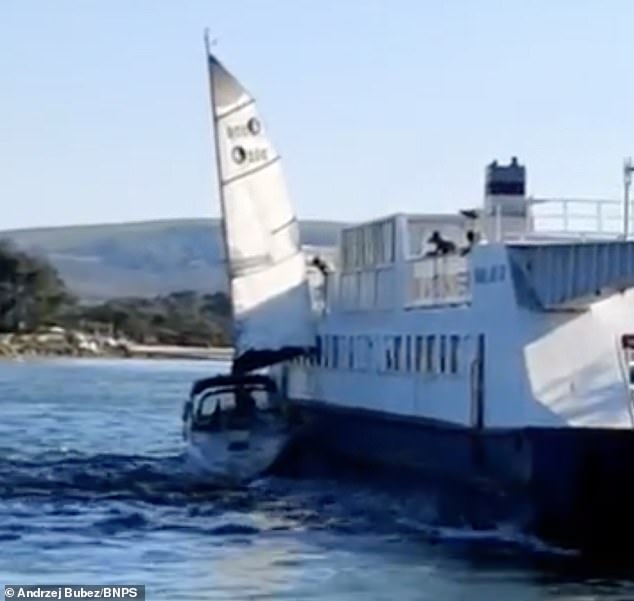 By Isabella Nikolic for Mailonline

It’s the terrifying moment when an impatient sailor’s yacht is nearly sucked under a car ferry as horrified tourists watch.

The 70-year-old sailor had tried to beat the Sandbanks chain ferry service into Poole Harbor by steering his 30ft sailboat ahead of him.

But instead, it was swept away by the tide and swept away in the vortex of swirling water produced by the much larger ship.

Ferry passengers and tourists on the dock watched in horror as the yacht wedged against the side of the 240ft long ferry and nearly dragged underneath.

The pensioner had to get on the ferry because of the risk of sinking his yacht.

The 70-year-old sailor had tried to beat the Sandbanks chain ferry service into Poole Harbor by steering his 30ft sailboat ahead of him.

A passing RIB then attempted to rescue the sailor, but also got stuck.

The fiasco lasted about half an hour until a diving catamaran arrived on the scene and threw a rope to the dinghy and towed it to safety.

The crew then returned and freed the yacht from the ferry.

Andrzej Bubez, a computer engineer, was among the pedestrians whose ferry crossing was delayed by the tragedy.

He said: “The tide was coming in fast – its flow there is just amazing. The sailor attempted to outrun the ferry and the ferry sounded its horn to warn him.

“It was constantly screaming. At that point he tried to go around the back of the ferry, but it was too late. He collided with the ferry. If he had started to sink, it could have been even worse.

“A passing RIB tried to help only to succumb to the tide which pinned it to the ferry.

“A large diving catamaran then threw a rope at them and fortunately had the power to pull them out.”

The fiasco lasted about half an hour until a diving catamaran arrived on the scene and threw a rope to the din-gy and towed it to safety.

A spokesperson for Swanage Motor Road and Ferry Company, which operates the ferry, added: “It appears the skipper was inexperienced and did not understand the conditions and tried to race the ferry to get ahead of it. and changed his mind at the last minute.

“Fortunately everyone went home, but it could have been worse – it’s something that happens every season. We are just relieved that no one was injured and service was able to resume after 20 minutes.

Trever Small was at the helm of the ‘Rocket’ catamaran taking divers to port when the collision occurred.

He said: ‘We were on the way out when the boat collided with the ferry. It was life threatening – he could have been shot under.

“There was no one else on the scene, so we had to help. Fortunately, my boat is powerful enough – it has 90 hp.

“The tide was pushing him into the ferry so we had to get him off – I threw the towline at him and then the ferry lowered a ladder to get him on board.

“I wasn’t going to tow the boat with him on board – there was a chance he capsized and got sucked in.”

Poole RNLI arrived on the scene after the rescue and collected the boat before returning it to its owner.

Launch of the new Jeanneau Yachts 65 by Philippe Briand