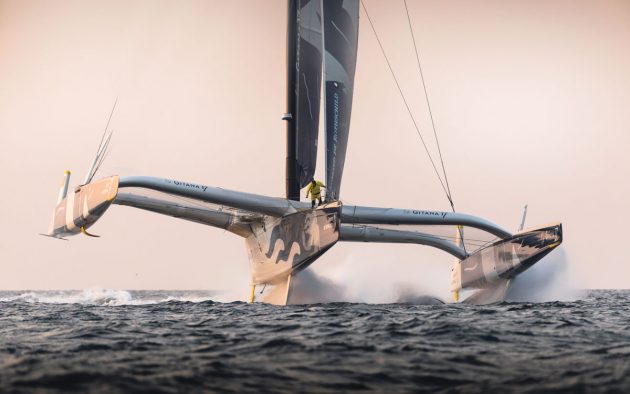 Around the world: 100-foot trimarans ready for solo racing

The fastest ocean racing models ever built, the 100-foot Ultim foil trimarans, will compete in a single-handed round-the-world race in 2023

The Ultim class announced the first solo round the world in a giant multihull, the Solo Ultim World Tour.

It will probably be the toughest ocean sailing race ever. The solo sailors will have to cover a course as arduous as the Vendée Globe, but will do so in trimarans with 100-foot foils with complex appendages capable of sailing at 45 knots, with the always present risk of capsizing in a fraction of a second.

Six of the fastest oceanic planes in the world will take part in the new solo round-the-world trip, with among the solo skippers Armel Le Cléac’h, Charles Caudrelier and Thomas Coville.

The Maxi Edmond de Rothschild of the Gitana commitment is one of the most optimized large trimarans and will return to the Ultim class. Photo credit: Eloi Stichelbaut / PolaRYSE / Gitana

Unsurprisingly, the race took a long time to materialize. Now called the Solo Ultim World Tour, it will be hosted by the highly experienced event company OC Sport Pen Duick, in conjunction with the Class Ultim 32/23, and will begin in fall 2023.

The concept was first brought up about 15 years ago, when the notoriously temperamental Orma trimarans were in their last days. A schedule was set for the embryonic Ultimate class which included solo and crew round-the-world races, morphing into a solo round-the-world race slated for December 2019, then called Brest Oceans.

Forty days, 23 hours, 30 minutes and 30 seconds: this is the time that is inscribed in the psyche of …

The solo Thomas Coville smashed one of the hardest records in the sport: the record for the solo round the world. He…

However, during the 2018 Route du Rhum – the transatlantic race known to be a bit of a demolition derby – four of the large trimarans suffered serious damage. At Armel le Cléac’h Banque Populaire IV capsized and collapsed in the middle of the Atlantic, while the Maxi Edmond de Rothschild lost 10m from a float, Sodebo also suffered structural cracks on a float and Macif lost a foil and a rudder.

History seems to be repeating itself: on the Route du Rhum 2002, only three of the 18 multihulls managed to complete the race, and the dramatic capsizes and rescues that followed saw many sponsors leaving the Orma fleet. It was clear that the Ultim class was far from ready to race solo around the world.

The Macif at the start of the Brest Atlantiques Race 2019

However, the class has changed course. A multi-stage double-handed race looping around the Atlantic took place in 2019 instead – the Brest Atlantiques. Although several boats suffered damage – Macif exchange a rudder in Rio, and Sodebo breaking off its starboard rudder after hitting a whale (an impact that caused so much damage that the aft portion of the starboard float filled with water and also came loose later), three of the four managed to bypass and there was no dramatic rescue.

Round the world race registrations

More remarkable still, new boats kept being launched. Banque Populaire has ordered a new Ultim for the Cléac’h, and although François Gabart’s former sponsor, Macif, withdrew mid-construction, its new Ultim – code name M101 – has been completed and it got new backing from French cosmetics group Kresk (now under the name SVR-Lazatigue).

Combined with a new Sodebo for Thomas Coville in 2019, and a healthy market for used giant trimarans ripe for optimization, the world’s largest and most daring offshore racing fleet is now attracting entries rivaling those of the latest Volvo Ocean one-design Race (seven in the last Volvo, six currently in the Solo Ultim World Tour).

The confirmed entries for the round the world race to date are: Banque Populaire XI, skippered by Armel Le Cléac’h; Maxi Edmond de Rothschild with Charles Caudrelier (who will return to the Ultim class after having been modified outside of the class rules for the round-the-world record attempts); that of Thomas Coville Sodebo; François Gabart on his new SVR-Lazartigue; Real, skippered by Yves Le Blevec, and a Brest Ultim Sailing entrance, the old Real, the skipper not yet announced.

The host city for the start and finish has not yet been decided, although discussions are underway with the City of Brest, which has shown keen interest in hosting the event since the creation of the project. and hosted the Brest Atlantiques Race in 2019.

Sodebo was one of the three latest generation Ultimates of the 2019 Fastnet. Photo: Kurt Arrigo / Rolex

The current single-handed round-the-world multihull record stands at 42d 16h, set by Gabart on his previous one. Macif in 2017. The Solo Ultim World Tour is expected to take around 40-50 days, as they won’t leave with an optimal forecast to break records.

However, the bigger question will be whether they can pull through without damaging the foil at the end of the race. After the experiences of the Brest Atlantiques Race and the Route du Rhum 2019, all the teams have innovated to both avoid collisions and make their trimarans more robust in the event of a collision with a UFO.

New Banque Populaire increased structures, sacrificing ultimate light weight for strength (see more on this in the August issue of The world of yachting magazine, now available). Sodebo has experimented with appendage fittings designed to absorb shock, and all major tris are testing collision avoidance systems such as Oscar to try and identify objects in the water.

Charles Caudrelier, the co-skipper of the Maxi Edmond de Rothschild who will be competing in the solo race, said: “This solo round-the-world race in Ultim is a dream that I did not even dare to hope for in my career. I’ve always been very drawn to the Vendée Globe, but here, at the helm of the fastest boats on the planet and in flight mode, it’s simply the ultimate challenge.

“To lead such a boat alone on such a demanding world course is an extraordinary adventure that I am really proud to share with the Gitana Team and on the Maxi Edmond de Rothschild. I’ve been thinking about this world tour for two years, it’s this goal that motivates me and keeps me moving forward every day.

Thomas Coville, skipper of Sodebo Ultim 3, comments: “It is a privilege to be part of this group of sailors. With Sodebo, we have been thinking about this race since 2007 when we launched the construction of the first Sodebo Ultim trimaran.

“There have been a lot of twists and turns in creating this round the world race. This race justifies 20 years of commitment and high level sailing. It is the race that will consecrate the life of an athlete and a sailor.

Armel Le Cléac’h, Banque Populaire skipper adds: “Our boats are magical, and I am happy that we can share them with the public around beautiful adventures. I can’t wait for it to start!

If you liked it….