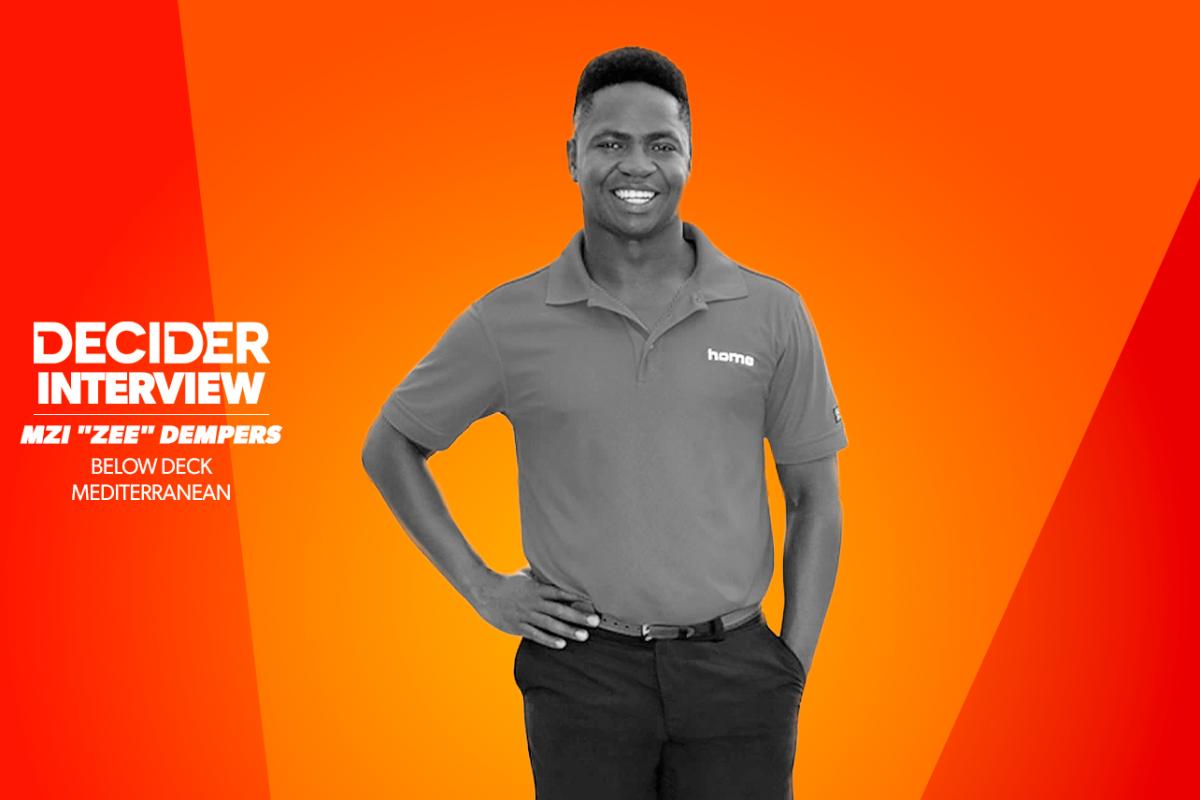 Ahoy, boaters! Under the Mediterranean Bridge Season 7 sails to Bravo and Peacock just in time to save our summer. Captain Sandy Yawn and his fearless crew will take the audience to Malta, a historic island nation, aboard the sleek and modernist 163ft motor yacht called “Home”. This season, Captain Sandy will have to work with mostly a brand new crew, including three new heads of department, to provide charter passengers with the best possible experience. Besides Captain Sandy, the other familiar face is everyone’s favorite Mzi “Zee” Dempers, a deckhand whose can-do attitude, work ethic and sweet crush on Stew Courtney Veale endeared him rabid fans of the series last season.

Originally from South Africa, Zee followed his two brothers into the yachting industry. Zee gained valuable experience on board last season and is back to deepen his knowledge with Captain Sandy at the helm. Bosun Raygan Tyler may not be as nurturing as his former Bosun Malia White, but Zee has his childhood best friend, Storm Smith, joining him this season as a deck mate. Zee and Storm were delayed joining their first charter due to quarantine concerns, so the two South Africans were eager to board ‘Home’ and get to work.

Ahead of the Season 7 premiere, we had the opportunity to speak to Dempers about the new season, again working under Captain Sandy, and why his days of dancing in a fun outfit for the amusement of a charter guest are not finished yet.

Decider: It is an honor to be invited to Under the Med Bridge, and I’m so glad you were! How did you feel about participating in another season?

Mzi “Zee” Dempers: I was so green in my first season! During this trip, I still felt that I had made progress. So I was over the moon when I got the phone call to come back. It was like, “Oh, wow. What?”

Were you able to gain more sailing experience between seasons?

That’s what we hope. [laughs] Sadly, I was back home in South Africa and still deep in COVID. I spent two to three months applying for a visa to leave the country without success. Finally, when I applied for a visa to go, funny enough, to Malta, that’s when the network contacted me and asked me to come back. I was like, “Oh, you don’t know much; In fact, I’m already starting the process.

Because I hadn’t been on a boat in South Africa between seasons, I was pretty stagnant, and the urge to want to do more just kept building and building. It was so frustrating that I couldn’t do more at the time.

Captain Sandy has become one of your mentors. What do you like most about working with her?

Captain Sandy is just amazing. You don’t often see a woman dominating the yachting industry. If you are interested in any part of the team’s work, it will give you every opportunity to advance. She has a way of guiding her crew that is truly special. During my first season, she helped me grow, as well as [Bosun] Malia [White]and encouraged me to take the next step in my yachting career.

With franchise staple Malia White otherwise busy this season, newcomer Raylan Tyler is now your Bosun. How was she as a department head?

They both have very different management styles, but I put Malia on a pedestal. For me, Malia stepped in in more than one way and guided us as deckhands to want to do better and help each other do better. Malia was a great team player. It wasn’t just about her. She’s a tough act to follow.

You and your friend and deck mate Storm Smith had to start the previous season a bit late due to quarantine issues! Was it scary?

We both did two weeks of quarantine, 14 days at the mark, not leaving a second before, and we joined the boat after the first charter. So it was a lot. Obviously your first day or two you take to familiarize yourself with the boat, and we didn’t necessarily have that experience. We arrived in the evening during dinner service, and it immediately put us on our feet. We were trying to learn the boat while trying to catch up with the rest of the crew. It was difficult, but being thrown into the depths isn’t necessarily a bad thing, I suppose.

Given her size and modern vibe, the “Home” superyacht is unlike any other superyacht we’ve seen on the Under the bridge franchise. What were your first impressions of the ship?

My first impression was that the “house” is absolutely beautiful. It was a bit of a different story after jumping on board. With any new build, there will always be a learning process, and we were right in the middle of it. There were lots of nooks and crannies that we had to get to grips with very quickly. It’s a beautiful boat, but difficult.

All water toys are stored in the hull of the yacht meaning everything has to be done forward and away from guests. How did you adapt to this new wrinkle?

It only works if you make it work. It’s a fun structure that adds an extra 10-15 minutes to every exercise you try to set up for guests. It doesn’t make a lot of sense to have everything up front, because then you’re trying to carry the gear on the back of your swim platform. Obviously the boat has that nice slender build, but the designers didn’t have water sports in mind, which made setting it up very difficult every day. It’s not a water sports oriented boat, I would say.

As a lone deckhand, Jason Gaskell got off to a rocky start with all the heavy work. Was he relieved to see you and Storm?

Storm and I felt horrible the first day we arrived. It was like, “Hey, we’re here to save the day,” but we also ruined the day because we didn’t know the boat at all. Jason was very kind, but he had to help us get up to speed very quickly. I hated the feeling of going behind, but he was nice about it.

Chef Stew Natasha and Chef Dave are revealed to have a devious romance at the end of the first episode. When did you realize they were in love with each other?

Well you hear things and you think things [laughs]. After our first two days together, we had an evening and I started thinking, “Okay, maybe there’s something else here.” It’s hard to say when it all started to feel like there was something there, but there definitely was.

We haven’t seen the team at a party yet. Who is the wildest boater this season?

There are so many different personalities in terms of the crew we had. It would therefore be quite difficult to determine who is the wildest. I think everyone brings something wild to the table. It’s a pretty wild bunch, I would say. People might be happy to know that I didn’t fall.

We see you breaking it down a bit in the trailer in a gold outfit. Have you been playing quests regularly this season?

I thought my days of dancing in fun outfits were over, but no.

As long as you’re in this franchise, you’ll wear fun outfits and let loose.

Yes, and it’s so different from what I’m doing now! I’m actually back in Cape Town teaching deckhand lessons, powerboat lessons and jet ski lessons for aspiring boaters to enter the industry. In the next two weeks, I will be back abroad, looking for a new job.

Given all your experience, I don’t think you’ll be looking for long! I know you can’t give spoilers, but how would you briefly describe the rest of the season for Under the Med Bridge Fans?

Under the Mediterranean Bridge premieres Monday, July 11 at 8 p.m. ET/PT on Bravo. New episodes will be released a week earlier on Mondays on Peacock starting July 4.