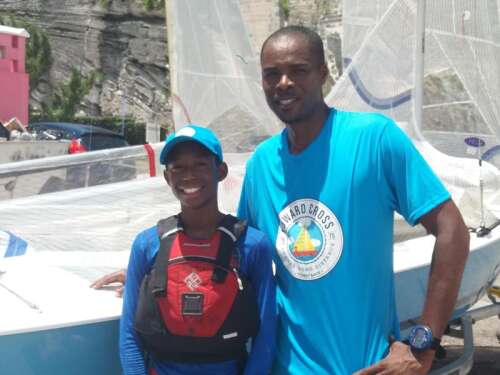 The Bermuda squad that will compete in the inaugural Star Sailors League Gold Cup in Switzerland this month continues to take shape with four new additions to the roster.

Peter Dill, Will Lorimer-Turner, Dale Brangman and Thomas Penruddocke have all been named to the squad that will represent the island in the May 17-22 North American Qualifying Series.

Dill will serve as archer, Brangman and Lorimer-Turner as grinders, and Penruddocke as reserve sailor.

“Pete was boat captain and jib trimmer for Team BDA during the 2017 Youth America’s Cup,” read a team statement. “He spent time racing everything from Nacras to GC32s to your more standard keelboats.

“Not only a talented sailor but also incredibly strong; Pete is a hard working perfectionist and could easily fill any position on board.

“Will grew up sailing Bermuda on everything from Lasers to J24s to a Moth.

“A powerhouse in the gym, we’ll be counting on Will to bring some serious watts as one of our grinders.

“Dale has competed both on the island and internationally in the Comet class for the past 40 years. “Not only does he bring a wealth of experience to the team, but he has a very positive attitude and an infectious smile.

“Thomas has Laser and Waszps racing experience and brings enthusiasm and a desire to learn with him on the water every day.”

Kirkland, who represented Bermuda competing with his brother Zander in the 49er class at the 2012 London Olympics, will serve as tactician, Greenslade as jib trimmer, Penruddocke as float and Lines as leeward trimmer.

Rockal Evans, the multiple national champion, is captain of the Bermuda team while experienced and highly decorated sailor Emily Nagel will serve as vice-captain.

Bermuda will face Antigua and Barbuda, Puerto Rico and Tahiti in Group 1, with the eventual top teams in the group advancing to the next qualifying round.

The SSL Gold Cup is a new international sporting event to determine the best sailing nation in the world.

The teams will compete in the same one-design SSL 47 monohull on Olympic windward-to-leeward courses in fleet regattas lasting between 45 and 75 minutes.

Meanwhile, Aspen has been officially named title sponsor of the Bermuda team for the next three years.

“Aspen is delighted to support the Bermuda community which has a long and proud history in sailing,” said Christian Dunleavy, Chief Underwriting Officer of the Aspen Group.

“Supporting Team SSL Bermuda allows Aspen to do our part to help create the future success of a diverse group of budding Bermudian athletes.

“We wish the team success in their upcoming training and competitions and we will no doubt represent Bermuda well.”

Nagel said she and her teammates were “incredibly grateful” to have Aspen on board to support their campaign.

“Their involvement will allow our team to compete on the world stage with a higher level of readiness than would otherwise be possible,” she added.

“The competition at Grandson will be fierce and as a team, SSL Bermuda is doing everything in its power to ensure we emerge victorious and make Bermuda proud.”