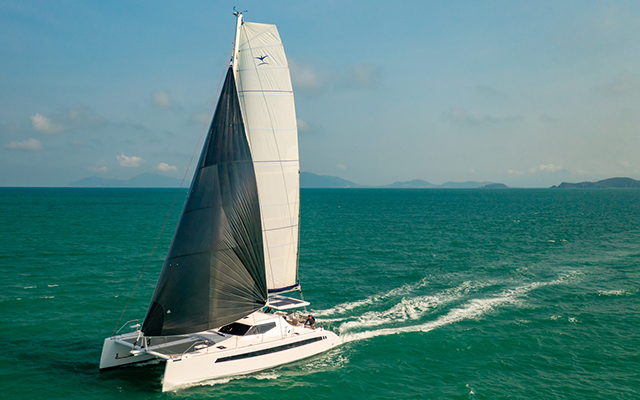 Among the growing number of multihulls and catamarans designed for offshore sailing, the new Seawind 1370 succeeds the elegant Seawind 1600. Toby Hodges and FranÃ§ois Tregouet take a look

The first Seawind 1370 is not yet on the water, but has a strong heritage of bluewater multihull design.

For nearly four decades, the Australian brand Seawind and its founder Richard Ward have oriented their catamarans around navigation on the high seas in complete safety, especially in terms of performance, protection and ease of handling. Since the purchase of the Corsair trimarans in 2010, it has increased its production and the releases of new models.

Her 1600 designed by Reichel Pugh, launched three years ago, is an elegant looking cat with a relatively low freeboard and smart solutions for fast sailing in blue water.

It has narrow kevlar reinforced hulls, combined with daggerboards that do not protrude from the deck and are capable of speeds of over 20 knots. The boards and rudders are raised to reduce the draft to 54 cm to access shallow anchorages. We were impressed with its attention to detail and safety considerations.

The Vietnamese shipyard has now fully updated the 1600 to a Passagemaker model, with new larger hulls, increased deck clearance, larger windows and more ventilation. Storage and sleeping space has increased and carbon boards and rudders are standard.

Seawind will launch its new 1370 later this year, of which 60 have been sold on the plans alone. This was undoubtedly helped by the fact that this was the ‘winning’ model in a comparison of the best blue water multihulls by YouTube sailors Terysa Vanderloo and Nick Fabbri on their Sailing Ruby Rose channel, who were looking to switch to a catamaran after selling their Southerly 38.

This 45-foot model, a contemporary design with a higher freeboard and inverted bows, appears to be an attractive option for a couple cruising long distances. We love the look of the twin sheltered helm stations.

Watson in third while iQFOiL Euros is operational