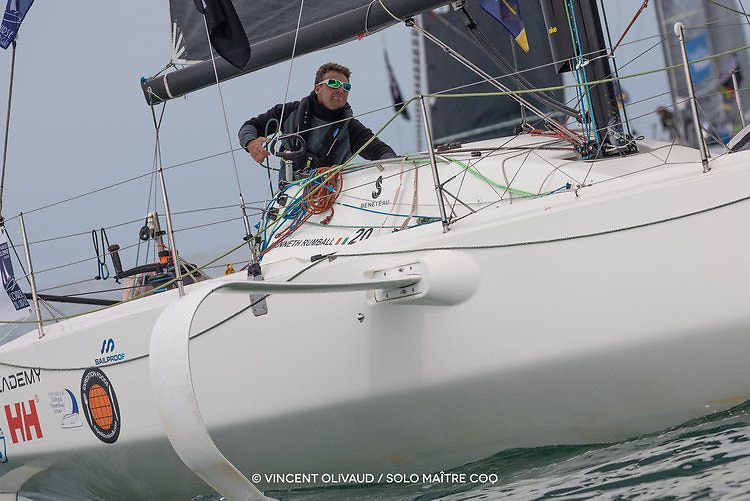 Busy Kenny Rumball looks back on his maitre Coq solo regatta, the first Figaro Solo Offshore event of the year

Here I am on the ferry back to Ireland, completely overwhelmed after another month of intense offshore sailing in France at the highest level, there is something to think about as always and above all to rely on!

If you prefer a video, full video diary here!

We headed out for some last-minute sail testing and short course trials ahead of the Solo Maitre Coq, the first solo offshore event of the year for the Figaro Class earlier this month. Time flew by and before we knew it after a few rig adjustments and batten changes in our jib, we set off to Les Sables d’Olonne to line up for the first time this year against the rest of the fleet.

We had wonderful weather during the few days of preparing the boat, the sailor and the weather for this event. I was very lucky to have Paddy Hutchings, experienced tuner and future Figaro rockstar, who joined me to make sure the boat was 110% ready for the races. Paddy was busy checking lines, re-splicing and swimming the boat daily to make sure the underside of the hull was as clean as possible for racing! Timothy Long, who had sailed with me as part of the Academy, was also on hand to help me out as he learned all about preparing these boats before heading out to sea for a race!

Our racecourse was largely unchanged, with the notable exception that we would have omitted the Birvedeau lighthouse from the course as there would be military gunnery exercises in that area while we were racing. This would mean that the bypass of the island of Belle Ile would be the northernmost part of the course! As for the weather, it was looking pretty straightforward, upwind there, downwind here, a windward-to-leeward of only 330 miles in length!

The race started as predicted by the weather forecast with a light northerly wind of 10-13 knots, the race committee gave us a quick phone call to get the fleet to set off again on a regular basis before heading downwind towards the island. of Re. The wind came from the shore and at the start, those who dared to get as close as possible to the exclusion zone on the shore were the first boats to win, of which IRL 20, Kenny was…

No more than three hours into the race we had our first stop and weather transition with the new wind blowing in from the northwest. This saw a small reshuffling of the peloton but nothing to worry about. This new wind was to build for the rest of the day and return to the northeast overnight, which it did exactly! As we circumnavigated Ile d’Ré, we were sailing fast upwind in demanding conditions pulling short tacks as close to shore as possible, shifting the 90kg of stackable weight on each tack! Tiring work but hard work here separates the fleet!

Kenny Rumball was as high as 11th with a point Photo: Vincent Olivaud

Eventually, the fleet settled on starboard tack which would take the fleet past Île d’Yeu, leaving it to port and all the way to Belle-Île. From there it was a drag race of identical boats! Sail selection, configuration and time spent piloting would be the determining factors of speed and ultimately position! It was the first real speed test for the fleet in 2022!

In the early morning, the time spent hard on the boat all night was well used with some space savings during the night and an approach to Belle Ile in a good position! The wind hadn’t really changed with around 20-24 knots all the time! We expected it to be dead at around 15kts for the kite downwind to the Sands! But more wind means more speed, our biggest spinnakers up and we go downwind at high speed towards the Rochebonne plateau. 25 knots of wind, great sea state saw consistent boat speeds in high years all the way south…. Much more driving required meant no time to rest or eat, it turned out to be a tough ride.

On the Rochbonne plateau, we had a rough sea state and 30 knot winds, going down the big spinnaker alone was demanding, especially when there was only one on board and we knew we needed more late in the race! Damage was not an option…

If you thought it was time to rest, the intensity continued with the blast of gennakers rolling back towards Les Sables at a steady speed of around 15 knots. At this point, I was sitting comfortably in 11th position knowing that there was only a 60 nautical mile loop left from Les Salbes to a weather buoy 30 miles to the southwest, then back. How hard could that be?

As usual in the Figaro class… Very! As we approached the weather buoy the wind dropped and died and we rounded it at 0 knots. 30 Miles back to Les Sables, tired, hungry and honestly, a bit emotional!

Since in the fleet we are not allowed to carry cell phones or have assistance from the outside world, our weather information was over 48 hours old, so it was very difficult to determine where to position yourself on the home rhythm.

In the end, the left side of the course paid off with the top back having quite a big shake-up along with the rest of the fleet. Frustratingly, I lost 9 places to finally cross the finish line in 20th position. However, I was very happy with my overall performance considering decision making, speed and choice of sails!

We now had A FULL DAY to recover before two days of coastal sailing on Saturday and Sunday. It was a joy for me when my parents came to visit me and support the last two days of the event. Saturday was very, very light wind, no more than 5 knots where the race director gave us Bannane courses which are upwind-downwind. Extremely unstable light and variable winds saw a messy race finish where I was consistent finishing 19th leaving me 18ht overall going into the final day.

For the last race, we had to do a 30-mile coastal race with a light wind upwind, an equally short downwind before going up the coast beyond Les Sables and then back. A good start allowed me to cross the first windward edge in the mix of the leading peloton and I held on for the next downwind leg. However, on the 11 miles upwind I started to realize something was wrong as my speed wasn’t as good as on the long offshore run. Discussion after the race and it would be obvious that I had installed my mast incorrectly with too much tension in the D1 shrouds. I still managed to get the boat moving and finished this race in 20th position, leaving me 20th overall in the event.

Considering this was my first solo race in two years with a huge improvement in performance and finishing position from my last solo race, I came away very satisfied with the event.

It was now time to rest, I was very lucky that Paddy and a few members of the Malizia IMOCA team took the boat north for me to Port La Forêt where he lives when not sailing . The last few months have been very intense, with the boat coming out of the water for the first time since January!

We now have time off before heading to the UK this weekend for the RORC Cervantes race this weekend with other Irish sailors. It’s busy and important to get some rest between these races, even if only for a day or two!

Lots more to come so stay tuned for next month’s exploits.