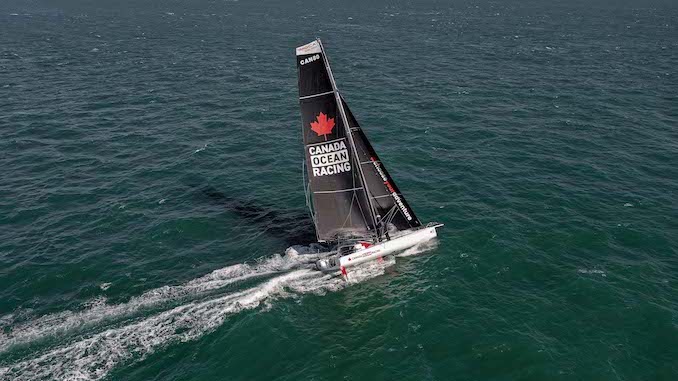 Canada Ocean Racing is a newly founded offshore racing company by former Technology Engineering CEO Scott Shawyer. He aims to be the first Canadian to complete the Vendée Globe, a solo round-the-world race. To help him in this endeavor, the five-time Vendée Globe competitor Alex Thomson.

Part of this initiative includes a partnership with MLSE to teach children STEM programs that will teach them all about weather, navigation, life monitoring systems as well as boat operation. They will also work with The Magenta Project (an advocacy organization for women involved in performance sailing), sea cadets and local yacht clubs to build community around this campaign.

We had the chance to speak with Scott to find out more.

What does it take to compete in the Vendée Globe and why is it so difficult? What types of preparation does this require?

I would say the Vendée Globe is the toughest sporting competition on the planet because you are
completely alone, in a non-stop race around the world for 3-4 months, battling the elements. There’s no
another competition that tests your physical and mental endurance like the Vendée Globe.

The rules are simple, you take everything you need, you can’t put your feet down and you can’t take anything
assistance, and once you have left France, you must return by your own means. The preparation however, well
This is an other story ! I take the next 6 years to prepare myself and learn everything I need – by experience
to security and technical protocols, 2028 is just the right time. It’s not just about the end
goal, it’s about the journey for me. I start as a real novice and I hope to come out of it like the
first Canadian to finish the race! The training began with my first transatlantic crossing this past
summer – it was exciting to say the least, when you are faced with 4 meter waves. Beyond spending
time spent on the water working on my sailing skills, I am also working on a number of mental tools to manage
anxiety, isolation and even seasickness.

What has been your toughest race to date?

At this point, I’m an amateur sailor. I have been sailing dinghies and small keel boats since I was a child, but this
is a new area for me. I’m starting my first double-handed IMOCA race at the start of next year. Of the,

I will be taking part in some of the races in the IMOCA Globe double-handed and single-handed series leading up to the Vendée
Globe 2024 so I’m getting used to the fleet and the competition before it starts to count.

Tell us about some of the ways you engage young people and introduce them to sailing.

When I was eight I developed my passion for sailing – I was sailing dinghies at my family’s house
Cottage. Before I knew it, I was sailing catamarans and even competing on Antrim 27 sports boats.

Due to my exposure to sailing as a child, I can confidently say that I have found the passion of my life. I
want to provide the same experiences to other children and inspire the next generation to take charge of their
own adventure. We offer young people the opportunity to board the IMOCA 60 yacht and
understand the opportunities available to them. For example, we will invite students to attend boat trips
and STEM sessions as an extracurricular activity. I’ve always been passionate about investing in children, which is one of the reasons I co-wrote the “Go Outside Activity Challenge Book” which encourages
children to engage in outdoor exploration.

Where will Team Canada Ocean Racing be based and train?

We will train mainly outside of Europe. Most of the races in the series leading up to the Vendée Globe begin in
France, so it makes geographical sense for us to be there. It is also not currently practical for us to train
of Canada, but we would like to do so once the infrastructure is in place to maintain a racing boat like ours.

Our long-term goal is for the team to be based outside of Canada and for us, even if the boat is not
physically here – will work with the organization to develop the skills needed to work in an ocean
racing team.

How can young people get involved in the various programs offered?

We have engaged in a number of youth programs while in Canada this year and we will
keep doing it. These range from very enthusiastic sea cadets to college sailing teams and young
sailors from local sailing clubs. Each group received an in-depth technical tour of the boat. when we
put together the team, we realized that we had to work hard to develop and inspire the next generation, to
show them that there are real careers in a team like ours, it’s not just about being a sailor, you also have to
engineers, riggers, painters, social media, designers, finance and many other roles. Sailing brings life
lots of science, math and environmental topics, and it’s also great for your geography! For
For example, how do you get a 60ft race boat from the Atlantic to Toronto? What are the forces at work
on a sailboat? How does the carbon cycle work in the ocean? These are just a few of the topics offered.

While we were here in Toronto, we also hosted a session for Project Magenta whose champions get
more women in our sport, a group of 8 sailors spent two days with us and they participated in
workshops on rigging, weather, sponsorship and spent a day training with us in over 25 knots of wind!

How did you team up with Alex Thomson? How did the relationship start?

I’m looking to build a successful business that thrives long after racing so who better to get on board
than a legend like Alex Thomson, who ran a very professional organization in this field for over 20
years. I want to speed up and Alex has completed 5x Vendée globes, which is more than half of the
Vendée Globes that have existed! Alex’s team is what many would consider the most successful in a long time
leading the IMOCA team around the world. There are so many things about putting together a campaign like this that I thought
it would be nice to get a head start and learn from the best, so I hired Alex and his team to
help us build a team for Canada. Our objective is not only to succeed in the Vendée Globe 2028 but to
build and operate a professionally run IMOCA program here in Canada for many years to come.