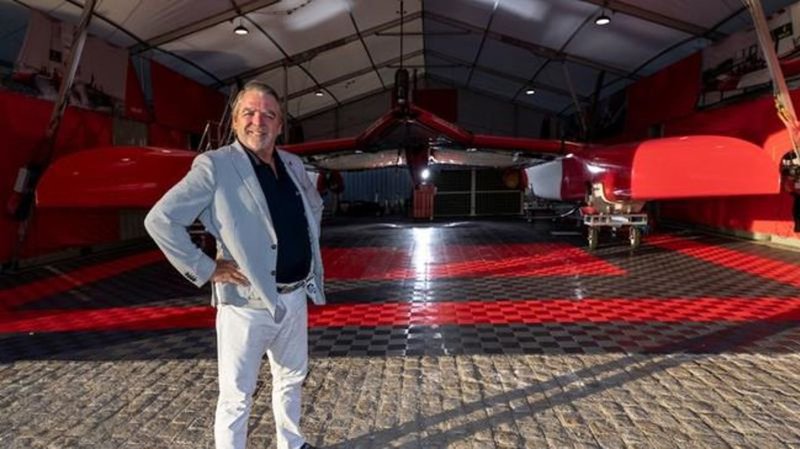 “It’s really something to see a sailboat go 100 kilometers an hour. Most motorboats can’t even come close to this.

SailGP has suspended its second season in 2020 due to the pandemic. It resumed in April this year in Bermuda with subsequent races in Italy, Great Britain, Denmark, France and Spain. The next event is scheduled for December 17-18 in Australia with the season finale next March in the San Francisco Bay Area.

The winner takes home $ 1 million. Australia currently leads the rankings, one point ahead of the United States and Japan.

SailGP was founded by billionaire Larry Ellison, founder of computer technology company Oracle, and yacht champion Sir Russell Coutts, who won both Olympic gold and the America’s Cup. Until recently, Ellison owned all the teams.

The races are short, with three over a two hour period, and are usually filled with changes of head. And they’re contested near shore for viewers to watch, taking place in iconic settings from the beauty of Bermuda to the majesty of Sydney Harbor and the Golden Gate Bridge of San Francisco and Alcatraz.

Pye was introduced to SailGP by former Canadian Olympic sailor Tyler Bjorn earlier this year after donating to charity to purchase Waszp sailboats with the aim of involving children in sailing.

Bjorn told him that SailGP was doing the same with his SailGP Inspire program and suggested that he take a look at the parent competition. After watching burst racing videos, he got hooked.

Pye, who lived this summer on his 60ft sailboat in Spain, attended SailGP races in England (Plymouth), France (Saint-Tropez) and Spain (Cadiz).

He calls it a “very enjoyable sport” which is entertaining while ticking boxes such as powered by nature and environmentally friendly.

Sailing is in Pye’s blood. His father and grandfather were both in the British Navy. Born in Vancouver and raised in Montreal, Pye holds British and Canadian passports.

Pye, who was five when he started sailing with his father, taught sailing and competed in the J / 24 class in the 1980s.

But Pye says he’ll leave his entry to SailGP to the crew experts.

Pye plans to sail his own boat from the Canary Islands to the Caribbean this month. It’s business and pleasure, as the boat is equipped with a “beautiful office” with a sophisticated satellite system.

“With COVID, it really changed everyone’s life. No one knows or cares whether I’m in my office in Montreal, Toronto or Mallorca, Spain, ”he said. “It really allowed people like me, who are at the end of their careers, to start enjoying the fruits of our labor and kind of living the dream.”

This trip will mostly be a vacation, however.

Pye describes his daily work as an entrepreneur in the investment industry. He is President and CEO of 3iQ Corp., which won a landmark Ontario Securities Commission decision in late 2019 approving the world’s first public investment fund dedicated to Bitcoin.

“The way I describe it is very simple. Money goes digital in our lifetime. And Bitcoin was just the first step in showing people how it worked, ”Pye said. “The industry will grow and change, but it is now a two trillion dollar industry from zero 12 years ago.

Its president of 3iQ Corp., Robert Kidd, has already competed in the America’s Cup.

Pye says he will announce his sailing team roster soon with Bjorn in charge of sailing, recruiting and training. SailGP requires the boat to be made up of Canadians except one.

“Some of the best Canadian sailors over the past two decades have already reached out to us… No, we don’t have an F50 in Canada yet, but it will really change the sport and put professional sailing at the forefront. And that gives all of our young people something to look forward to on how to move forward, ”said Pye.

Right now, Pye is the sole investor in the Canadian team, but he says he’s open to bringing others on board.

“Obviously that’s a big nut to chew on,” he said wryly.

“It’s north of $ 10 million to run probably one program per year,” he added. “So we have to get some very serious sponsors with this.”

Anticipating SailGP’s growth, Pye says he expects his team to become “considerably more valuable” in the years to come.

With the Pye team entering SailGP, Canada has the right to host an event.

“I think the downtown Toronto harbor with 10 of these giants next summer would be amazing,” Pye said. “We certainly work with the city of Toronto, but there are other sites, whether it’s Mississauga or Hamilton or Kingston or Montreal, Quebec, Halifax, Vancouver.

Pye’s SailGP catamaran is currently under construction in New Zealand. The league owns all the boats, which are rented by competing teams.

Pye’s team will be able to use an F50 simulator to prepare.

“Frankly speaking, the other eight boats are two years ahead of us,” he said.

All the boats on the circuit are the same with teams provided with the same information. The size of the crew and the configuration of all boats depend on the conditions.

The new season begins in May in Bermuda, and the full schedule will be released in the coming weeks. Pye expects the Canadian race to be around Canada Day.

This report by The Canadian Press was first published on November 1, 2021