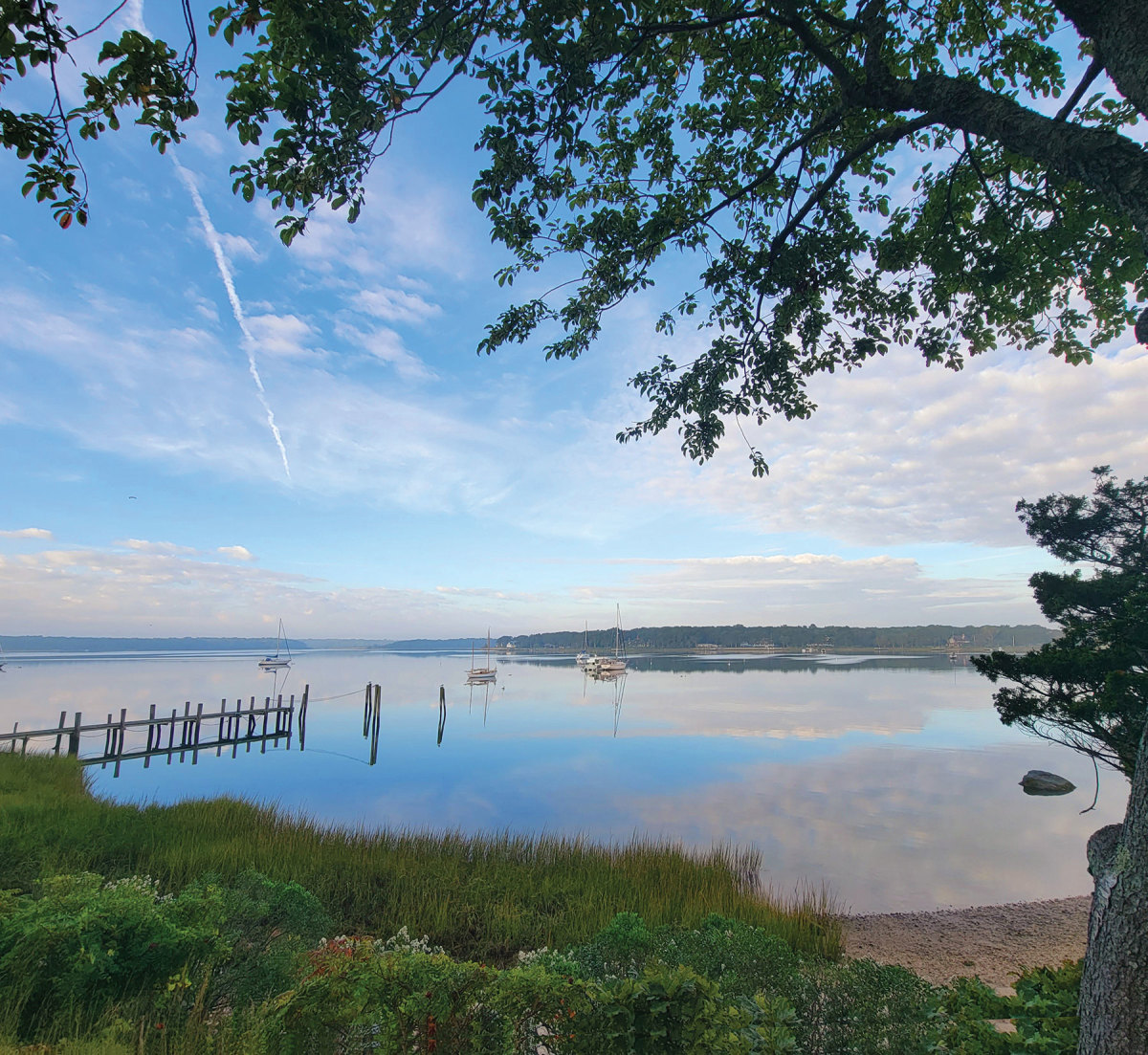 I’ve always thought Gardiner’s Bay on the east end of Long Island, New York was special. Native Americans, settlers, pirates and generations of Baymen thought so too. Today, boaters agree. I have been sailing Gardiner’s Bay for 40 years. Her beauty never fails to inspire admiration. The many coves and harbors make for an ideal weekend or week-long cruising experience as there are great anchorages and endless things to do ashore.

The bay is 20 statute miles southwest of New London, Connecticut, and 54 miles southwest of Newport, Rhode Island. To the east is Gardiner’s Island, to the south is Three Mile Harbor/East Hampton, to the west is Shelter Island, and to the north are the towns of Orient and East Marion. From north to south, the bay extends for 10 miles and from east to west for 8 miles.

If you’ve never sailed here before, be aware that there are some shallow spots, mostly off the coast of Shelter Island. However, most of the water in the bay is between 20 and 50 feet deep. Coming from the east, the best entrance is north of The Ruins and south of Plum Island. If you’re coming from points north, be prepared to experience Plum Gut, home to some of the East Coast’s fastest currents. In the event of a strong blow, the wind against the current can create rough seas. After crossing, head to the following locations.

GARDINER ISLAND Once in the bay, you can drop anchor at Cherry Harbor on the west side of Gardiner’s Island. There, except for two old houses and a windmill, you will see an original British land grant, almost untouched for centuries. The 3,300 acre plot has been privately owned by the Gardiner family since 1639. As landing here is prohibited, even below the mean high tide line, your boat will be guarded by shore security.

If the wind is from the southwest, head to the other side of the island and drop anchor in Tobaccolot Bay, just south of Eastern Plain Point. You will probably be alone. Use the time to reflect on the incredible birdlife and pristine vegetation ashore. History buffs should note that the heights have concrete pillboxes once used to spot German U-boats.

The South Channel is easily done by motorboat, but requires head-up navigation by sailboat as it winds like a snake around several sandbars. Every year, I sail around the island alone; it takes me about 4 hours.

THE HAMTONS If you’re looking for an eclectic collection of stylish restaurants, serious clothing and jewelry shopping, or cultural enrichment at places like the Water Mill Parish Art Museum, head to Three Mile Harbour. Its narrow but easy to navigate channel leads to a large anchorage. Once inside, you’re protected on all sides, so you’ll get a good night’s sleep. There are several marinas on the eastern shore which have docks, fuel and services, as well as land access. Once ashore you will need to call a car service to drive to the towns of Amagansett, East Hampton, Bridgehampton or Montauk.

If you leave Gardiner’s Bay and head southwest into Northwest Harbor, it’s possible to drop anchor or moor just off the bustling old whaling town of Sag Harbor and hike it all. . As you will learn whaling and history
Museum, this city was once one of the largest ports in America. A short stroll past the shops of Main Street in the residential area brings you to dozens of historic homes lining the leafy streets.

SHELTER ISLAND Heading due west is Shelter Island, with several bays and harbors to explore. The entrance to Coecles Harbor is just a split between a sand bar and a sand point, but it is well marked and the check depth is around 10ft. Once inside, the anchorage is southeast of Taylor’s Island.

Coecles Harbor Marina and Boatyard, builders of Shelter Island 38, is a full-service yard on the West Shore. Check the depth before you go. Boats with a full keel must be very careful of the tides. The Ram’s Head Inn to the north may have moorings (check with them first as the Inn has recently changed hands). Experience the sunset from here with a cocktail in hand. It’s a local ritual.

West Neck Harbor is on the south side of Shelter Island. A calm anchorage is against the sand spit. Dinghy on land for hunting shells or bathing in warm waters. To the north is The Island Boatyard, where you can find a few slipways, a marina with fuel, a restaurant, and a popular bar.

The main anchorage is at Dering Harbor on the north shore. This deep harbor (control depth is 20 feet) is a hubbub of activity. Members of a yacht club can check if they have reciprocity with the Shelter Island Yacht Club. If so, there are plenty of transient moorings and a launch service. New owners bought Jack’s Marine; mooring availability is unclear at the time of this writing. Fuel can be obtained at the Piccozzi wharf. You can drift to a small-town landing stage if you want to visit the handful of businesses that make up “downtown.” There are a few restaurants, hardware stores, a post office and several real estate agents. The renovated Chequit Inn has long been an island favorite. For a traditional breakfast with Mexican accents, try the Stars Café. The espresso is pretty good.

To further explore the island, rent bikes from Piccozzi. Take one to the 2,000-acre Mashomack Preserve for a nature immersion. Its well-marked trails vary in length from 45 minutes to 3 hours. The views from the cliffs on the Blue Trail are spectacular, with all of Gardiner Bay exposed. If you are on a bike, the beaches of the island are open to you. I think the best swimming is at Menhaden Beach, but
Wades family beach with a lifeguard and facilities is also popular.

GREEN DOOR Another benefit of staying in Dering Harbor is the ability to access Greenport by ferry. Once on the other side, the entire North Fork of Long Island is accessible for exploration. With transportation, wine lovers can spend a few days touring the tasting rooms. Greenport has over 20 restaurants and bars. The upgraded Claudio’s, which opened in the 1870s, offers dockside dining and cocktails. Greenport is a good place to stock up as there are groceries and maritime supplies. Preston is a must for the latter.

With so much beauty and so much to see and experience, it’s no wonder charming Gardiner Bay and adjacent cruising grounds have been so popular with boaters for so long.

This article originally appeared in the April 2022 issue.

Inside the Sunreef 70 Yolo – Yacht Harbor