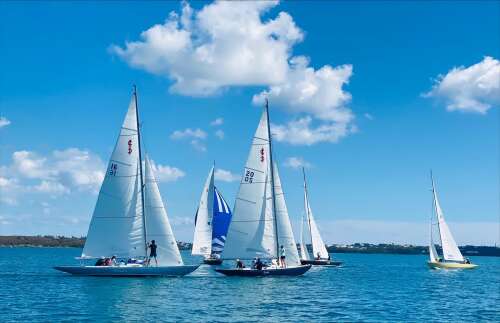 Craig Davis exceeded his expectations as he competed in the International One Design class in the opening races of the Bermuda Keelboat Regatta in the Great Sound yesterday.

Commodore and crew of the Royal Bermuda Yacht Club Ricardo Larranaga, Sarah Fletcher and Christine Whitestone weathered the light, choppy breeze better to land with a slim one-point advantage in the six-boat racing fleet during the event sponsored by Bacardi.

Davis’ team went 3-2-1 in the three races contested in tough conditions to quickly take control of the nine-race series.

“I’m very happy with how things went today,” Davis told The Royal Gazette. “It was not what I expected. There are very good sailors there and on a day when it is so unstable, anyone can come there.

The difficult conditions kept the teams on their toes and the race committee busy throughout the day on the upwind-downwind racecourse.

The first race was abandoned during the start sequence after the wind turned 30 degrees and the racecourse adjusted in all three races as the choppy breeze took its toll.

“We had some big changes there, so it was really snakes and ladders,” Davis added. “We sometimes had changes of 45 to 50 degrees.

“Everyone was making big wins or losses depending on whether they guessed the change in certain cases.”

Davis was among four teams tied on five points heading into the final race of the day, which they eventually won to land on pole position.

The fleet cleared the start long enough before Davis was even sailing in some pressure at the end of the committee boat line and gradually extended their lead as they sailed up the first tack to windward.

“I’d like to say I knew it was there and I was shooting it, but we got lucky and managed to make a good profit out of it,” he said. “It was just one of those days where you needed to find the pressure.”

Davis and his crew cleared the upper mark with a two to three boat length advantage over the chasing pack.

The race was all but over by the second and final leg upwind as the leaders increased their advantage considerably and comfortably took the win.

“We were a last minute team so we didn’t have very high expectations as competitive sailors in a small fleet,” he said. “There are some really good guys here, so we were just hoping to be in the chase.

“I’m very happy with how the day went, but it was very difficult in the horrible breeze. “We were happy if we saw seven or eight knots that lasted 20 seconds and then the rest of the time, c was four or five.”

McNiven is competing with crew Cow Cao, who are making their regatta debut, and co-helmsman Ray DeSilva.

“We had a fourth crew member, but he dropped out for today,” added McNiven, whose team went 2-3-2 that day.

“It was pretty hit or miss, but we had some good starts and some close races,” he said. “We’re just here having fun and it’s all good.”

Yesterday’s third race could potentially have a big bearing on the title, with the breeze expected to ease to two to five knots as an anticyclone becomes stationary over the island for the rest of the weekend.

A new champion will be crowned in the IOD fleet this year as Patrick Cooper was ruled out after his boat sank and was damaged in Hurricane Fiona last month.

Today the J105 class, with multiple winner and former Olympian Peter Bromby, will begin their series in the Great Sound, weather permitting.