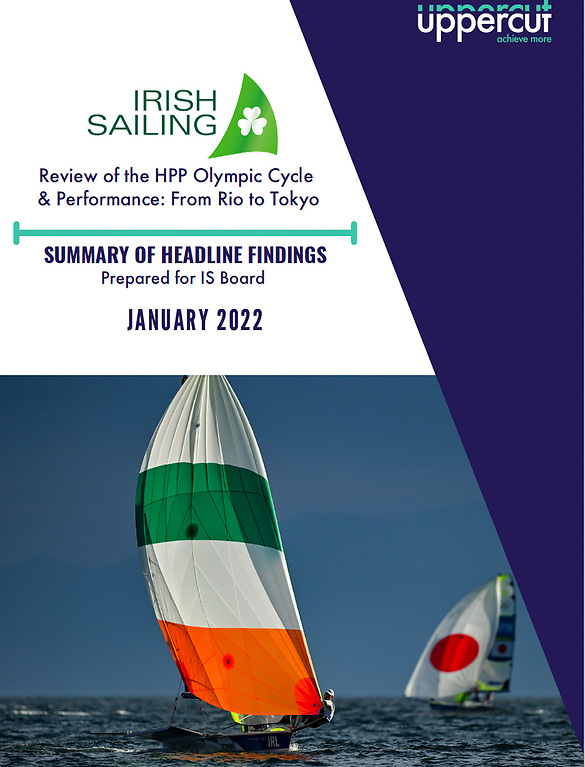 Tokyo was a disappointing Olympics that fell short of high post-Rio expectations, according to the conclusion of an independent external study released yesterday by the Irish Sailing Association (ISA).

The review, commissioned by the ISA, was prepared by sports coaching guru Gary Keegan of Uppercut Consultants and was originally due to be published by November 2021, but was published yesterday (February 8) on the website of the ‘association.

The review follows criticism from a number of key observers, including Olympians and former coaches, as well as former ISA President Roger Bannon, who called for “unbiased reflection on Ireland’s sailing performance” after Tokyo.

“Sailing is one of the top three most funded sports in Ireland, and it was expected that four boats would qualify, two medal contenders and an Olympic medal, but that was not achieved. “, says the Keegan report.

However, “the 49er crew’s performance was a highlight considering they were first-time Olympians and suffered a two-race disqualification,” Keegan notes.

Presenting the report, Irish Sailing Chairman David O’Brien said: “I am very pleased to share the independent external review of the Tokyo Olympics with you, Irish Sailing members and the sailing community. sailing in the broad sense”.

It appears, however, that the association did not publish the full review and instead published a 17-page “summary of key findings”. (downloadable below)

The summary document notes: “A comprehensive report was delivered to the review steering committee that outlines detailed findings, supporting evidence and recommendations based on the data and information shared during the review and shared also some insights and comparisons based on our experience of HP environments.”.

“The Irish sailing community (the grassroots of the club) would benefit from increased awareness and understanding of HPP,” the review concludes. PHP athletes have all developed through the club system into PHP. The report states that “their journey and efforts to be world-class should be shared more with club members to reinforce the sense of pride and connection between the club’s community and its HPP”.

“There were positive comments about Fukuroi in Tokyo, but at their Olympic accommodation base, athletes reported difficulties with ‘a feeling of isolation due to location, travel times between hotel and location of sailing, lack of facilities, time for themselves (leading to overthinking) restricted movements, room sharing, poor quality of food, etc.,” the Uppercut report states.

Some of these issues were caused by the loss of the planned main accommodation base, which was a critical factor in the quality of the final drawdown and team preparations. “Overall there was a lack of on-site support compared to competitors, for example access to psychological and physical support, boat repairs, etc. and management reported the challenge of getting this support throughout the duration of the Games,” the report said.

The report deals with the measurement infraction suffered by the crew of the 49er which led to the disqualification of two races and concludes that it was “avoidable”. Coaches and athletes pointed out that the cause was due to a harness that had deteriorated, i.e. wear and tear on the hydrophobic layer of the harness, causing it to absorb more water and therefore increase his weight.

“The harness was checked too far from the regatta. There was no protocol in place to identify red flags in the system and the appropriate action to take and also no check and balance protocol,” says- he.

The report also says more communication with athletes who do not qualify needs to be improved with time to do so with sensitivity and respect and to explain context and rationale. As regular Afloat readers will know, a shortened Radial trial caused significant concern and a one-time process change in 2020.

Irish Sailing performance manager James O’Callaghan said in response to the report. “The challenges are clear, but there is great optimism from all stakeholders about the program’s potential given the athlete profile and the experience of the coaching and leadership team.”

All of Afloat’s Tokyo coverage can be found in this dedicated link here. Rio 2016 coverage is here and Paris 2024 is here.

Barbados Itinerary: Five Days of Things to Do