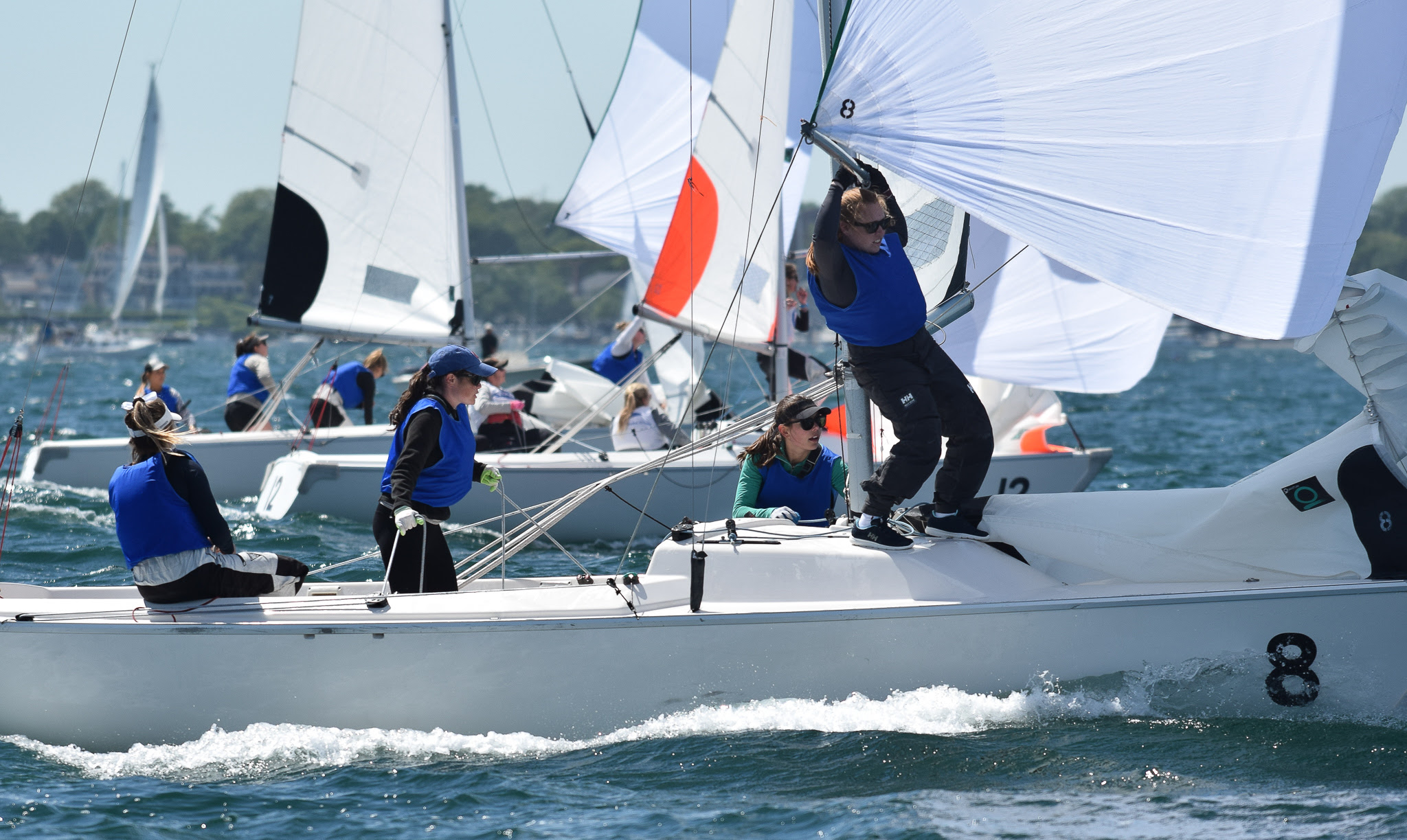 Newport, RI — Two very differently constructed teams faced off in the deciding race of the second annual 2v2 Women’s Team Race, held this weekend at New York Yacht Club Harbor Court. The Lauderdale Yacht Club (Fort Lauderalde, Florida) team was based on a core group of young sailors who currently race for Boston College and recently finished second in the inaugural InterCollegiate Women’s Team Race championship. The Bristol (RI) Yacht Club has used a grassroots approach, cultivating interest and skill with regular Monday evening team racing sessions every summer for the past four years. By the narrowest of margins, the Florida kids won.

“We were really slow on the starting line,” said Lauderdale team captain Erika Reineke, recalling the decisive race. “So we had a hard time getting out immediately. Card stock rounded [the first mark] in [first and second] and [fellow Lauderdale skipper] Sophia [Reineke] and I separate downwind. Luckily the girls in our boats were really good at flying the kite. We got ahead and had a little luffing match at Mark 3. We just kept fighting, and luckily it went well. You never know in team racing.

The Team race 2 against 2 women was held June 4-5 at New York Yacht Club Harbor Court in Newport, RI In 2021, this event joined the Club’s legendary mixed keelboat racing trio – the Morgan Cup, Hinman Masters and New York Yacht Club Grandmasters. Ten yacht clubs from across the country sent their top team racers to Newport for a weekend of competition and camaraderie. The regatta was held in Narragansett Bay using the New York Yacht Club’s fleet of 23-foot Sonar sailboats.

Erika Reineke is now two for two in this regatta, having been part of the winning New York Yacht Club team in 2021. The opportunity to sail with her younger sister and introduce a number of young sailors to the regatta l encouraged her to sail for the club where she learned to sail and remains an active member.

“Last year was the first edition, and I knew as soon as it happened that I wanted to come back,” says Erika Reineke, who is currently campaigning with a 49erFX for the 2024 Olympics in France. “Fortunately, my sister wanted to sail with me. This weekend was good.

The team from Bristol Yacht Club, from nearby Bristol, RI, came to the event with low expectations, but plenty of excitement.

“We haven’t done any practice days, so we’ll take it,” team captain Amanda Callahan said of the team’s second-place finish. “Over the past four years Bristol have built our team racing programme. [BYC Racing Chair] Nick Cromwell got the ball rolling, acquiring enough J/22s to race as a team. We just got new sails last year. Every Monday night we go out and have a great time running as a team.

After winning six of seven races on Saturday, the team was pleasantly surprised to find itself tied for first place with Lauderdale. The Bristol team’s solid form continued on Sunday as the team secured five straight wins before a loss in the team’s penultimate race set up a winning final race with Lauderdale, who had an identical record at this point in the regatta, 11 wins and 2 losses.

“Coming around Mark 3, it was really up in the air,” says Callahan, who is a sailing coach for Roger Williams University. “We luffed Erika hard, but she managed to get past us, so we had a 2-4 out of Mark 4. [Bristol skipper] Stephen [Hudson] was able to squeeze the first edge and get there. We were trying to increase the speed of our boat, and it kind of got away from us.

After a dizzying weekend of traps and dismissals, the Lauderdale Yacht Club crew could be forgiven for not even knowing they had won the regatta until told by a regatta official five minutes after crossing the finish line for the last time. The news drew spontaneous cheers from all nine women. But across the leaderboard, there was nothing but enthusiasm for the event and appreciation for the dramatic increase in interest and skill level of team runners.

“There are going to be a lot of women coming out of college sailing with a lot of team racing experience,” Callahan said. “Now there are all these paths they can take to stay involved in the sport, and that’s great.”