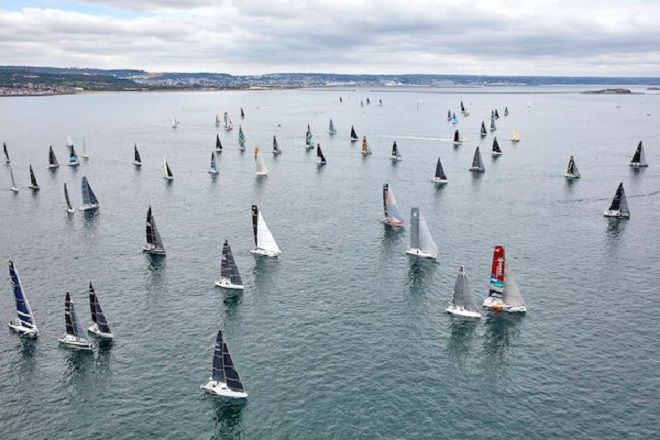 Cherbourg-en-Cotentin will welcome a first-class fleet as in 2018, with the arrival of the 2nd edition and in 2020, for the departure. 12 classes, crewed, double and solo, are invited to take the start on Sunday July 17. Three new courses, adapted to the different boat speeds, will be organized during this great race, in order to ensure the arrival of the fleet in La Trinité-sur-Mer within tight deadlines, after 3 to 4 days at sea.

All details are now available in the notice of race, published on the official site.

Initiated in 2016 by Jacques Civilise, the DRHEAM-CUP / GRAND PRIX DE FRANCE DE COURSE AU LARGE has quickly become an essential summer offshore race that takes place every two years. Each year, it attracts more competitors, the watchword competition-sharing-celebration which is part of its DNA.
Competition, with the organizer’s clear and stated ambition that the DRHEAM CUP / GRAND PRIX DE FRANCE DE COURSE AU LARGE become a benchmark event in the large category of offshore racing, like the Rolex Fastnet Race, organized in odd years, when the DRHEAM-CUP takes place in even years.

Sharing, with an OPEN event – hence its name GRAND PRIX DE FRANCE DE COURSE AU LARGE, open to all boats, all sizes (double-handed and crewed) and to all sailors, amateurs, professionals, men and women , with a particular focus on young people, through the Rêves de Large operation.

Finally, the party, the real DNA of this summer event that its host regions, Cherbourg-en-Cotentin, Cotentin, Manche and the Normandy region on the one hand and La Trinité-sur-Mer and Morbihan on the other hand, are delighted to welcome you in a friendly atmosphere which attracts a large number. This was the case in 2016 and 2018, with tens of thousands of people at the arrival of the second edition of Cherbourg-en-Cotentin. In 2020, despite the pandemic, many visitors came to admire the boats at Port Chantereyne.

It’s now time for the fourth edition which, as in 2018, was selected by the organization of the Route du Rhum-Destination Guadeloupe, OC SPORT Pen Duick, as a qualifying event for the single-handed transatlantic race from November 2022. The DRHEAM -CUP will therefore be open to all classes of boats able to take part in the single-handed transatlantic race, the Ultimes, Imoca, Ocean Fifty, Class40, Rum Monohulls and Rum Multihulls
. This promises a very high level race, many solo sailors have made the DRHEAM-CUP / GRAND PRIX DE FRANCE DE COURSE AU LARGE a compulsory event to qualify and / or train for the Route Du Rhum – Destination Guadeloupe.

For classes not intended to compete in the single-handed transatlantic race, the DRHEAM-CUP / GRAND PRIX DE FRANCE DE COURSE AU LARGE will be open to registrations in crews or doubles, as usual.

Faithful to the spirit of innovation that has characterized the event since its inception, Jacques Civilise and his team have designed three unique courses of 600, 1000 and 1500 nautical miles. The DC 600 course joins the select club of major offshore races such as the Fastnet Race, Sidney-Hobart, the Caribbean 600 and the Middle Sea Race, all 600 nautical miles long.

These courses, all lengthened and carefully designed, are a combination of coastal and offshore navigation which is the salt of these great multi-class events, while guaranteeing the regatta at all speeds, whatever the wind direction:

The DC 1000 course, 1000 nautical miles (Ocean Fifty, Imoca, Class 40) will head towards the Fastnet after the Isles of Scilly, before heading towards Ushant and the BXA buoy (Gironde estuary) and the bay of Quiberon.

The DC 1500 course, 1500 nautical miles (Ultimate) which will take the largest boats to the Isle of Man, then the Fastnet, past Ouessant, cross the Bay of Biscay to Bilbao and a final descent to La Trinidad-sur-Mer.

The start of the main race on Sunday July 17 will be preceded on Friday July 15 by a prologue, the DRHEAM-TROPHY, during which the Rêves de Large operation will take place, a tradition since the first edition in 2016: it consists of invite young people from Cotentin to take part in the prologue on board the participating boats.

Last day of arrival of the boats in Cherbourg-en-Cotentin

: Opening of the race village in Cherbourg-en-Cotentin

Estimated arrival of the first boats

The Notice of Race for the Route du Rhum-Destination Guadeloupe has not yet been published, this list is subject to change.