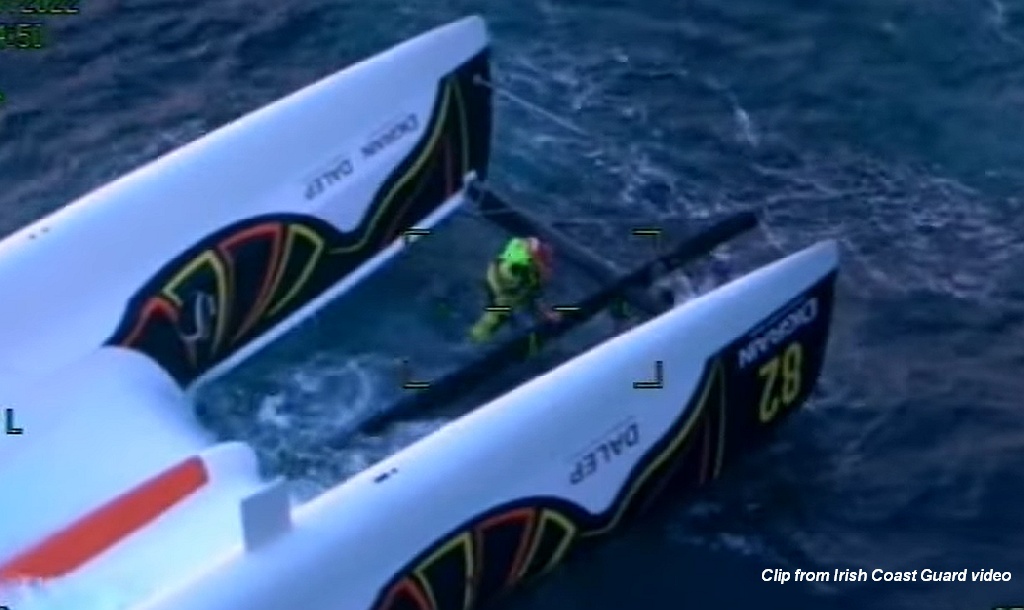 Baltimore RNLI was called to help a lone sailor whose yacht capsized 70 miles off Baltimore, West Cork on Tuesday evening.

Afloat, the Irish magazine for sailing, boating and maritime affairs, reported that the crew of the volunteer lifeboat launched their all-weather lifeboat following a request from the Irish Coastguard to come to the aid of a lone sailor who had taken part in a race when his yacht capsized, about 70 miles off Baltimore.

The sea conditions during the rescue were difficult with a force 6-7 wind from north to northwest and a swell of 3 to 4 m.

The crew of the Baltimore all-weather lifeboat arrived at the capsized catamaran where the sailor was on the overturned hull of the catamaran in which he had raced solo.

The only sailor involved was French sailor Loïc Escoffier who was competing in the Drheam Cup on his catamaran Lodigroup.

The 41-year-old Malouin had left Cherbourg and was 60 miles south of the Fastnet when the yacht capsized with him inside.

The Irish Coastguard Rescue 117 helicopter was also on site.

A small all-weather lifeboat inflatable Y-Boat with two RNLI crew on board.

They were able to maneuver the Y-Boat alongside to save Escoffier from the overturned hull.

RNLI crew members helped the sailor onto the lifeboat from the Y-Boat and Rescue 117 winched the victim from the lifeboat into the helicopter and returned to base.