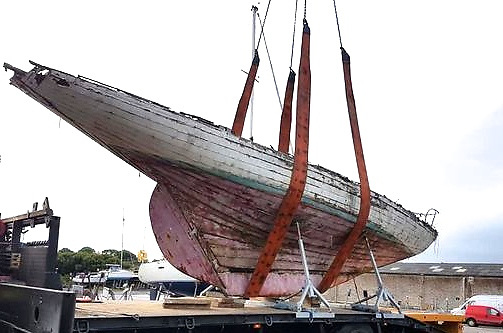 The ongoing restoration of the Dublin Bay 21 Class from 1902-1908 origins, designed by Mylne, undertaken by Steve Morris of Kilrush Boatyard for Hal Sisk and Fionan de Barra, has deservedly won several awards including recognition of use by the project of modern techniques and materials. to recreate different parts of the original detail drawings.

A special case is with the rudders, where the plain wooden stock of the original design was simply surmounted by a bronze rudder head which incorporated the tiller fitting. But in the new version, the stocks are epoxy laminated iroko, topped with a green heart button or cap above the Marine Grade 316 stainless steel sleeve about a foot long, and working great on a Delrin bearing just under the bridge.

Naneen’s new rudder head incorporated the use of epoxy, premium stainless steel and a Delrin bearing.

Thus, the original rudder heads are now surplus to utility requirements. Yet they are eminently collectable. Not everything had been accounted for as the fleet and its equipment was detailed before the move west for restoration at Kilrush, and this now explains how an Afloat.ie reader recently came across the original rudder head of Naneen, apparently stored for a long time on a dusty shelf in a renowned Dublin salvage yard

Naneen’s original rudder head, discovered at a Dublin salvage yard this month, and here scaled to a pint

However, an original tiller head that arrived at Kilrush is the only one I have had direct personal contact with, and it is the original Geraldine White Boat Tiller Control Kit part. Steve Morris sent in a photo, as Geraldine is currently being recreated at Kilrush, and it all brings back memories of 1963 when the DB21s were doing what was their last stand under their rather demanding auric cutter rig, for the process ruthless passage to the Bermudian rig was about to begin.

In 1963, a long weekend of varsity team racing was underway at Dun Laoghaire, and sailing magazine editor Hugh Somerville was also in town. So the DB21 class deployed their generous hospitality and their entire fleet of seven boats on Friday evening to give all the student sailing teams and the lone journalist what felt like one last chance to sail the DB21s as they were. were originally designed.

At the time, I was heavily involved with the Queens University Belfast SC team, a group that you could argue that although a puff of Asperger’s wasn’t mandatory, it was considered normal. Despite this, our very tolerant host-owner Paul Johnston gave us Geraldine’s free ride – the white boat – and we managed to finish second, just behind Hugh Somerville.

Tactician (left) and coxswain of the QUBSC 1963 DB21 field crew. Although a puff of Asperger’s wasn’t mandatory, it certainly helped. Photo: Russell O’Neill

This means we have become the former Old Original Dublin Bay 21 intervarsity world champions for life, and while that wasn’t enough to inspire us to prevent UCD from becoming the Irish intervarsity team racing champions the next day, it seemed to do something for us on Sunday morning two very consecutive special team races in Fireflies against TCD.

This was for the Elwood Salver, donated in the 1920s for the TCD-v-QUB sailing competition by a distinguished Belfast family, the Elwoods, whose ties to TCD go back generations. Despite its long history, the Elwood Salver – which is probably long gone in a closet of traded antiques – had never been won by QUB.

Until 1963, that is. Which is why, despite all that Naneen is the only DB21 actually built at Dun Laoghaire, when it comes to the QUBSC class of 63, it’s Geraldine – built by Ringsend’s Hollweys – who is The Special One, because she’s the most tangible reminder of one of the most extraordinary weekends our little club has ever experienced.