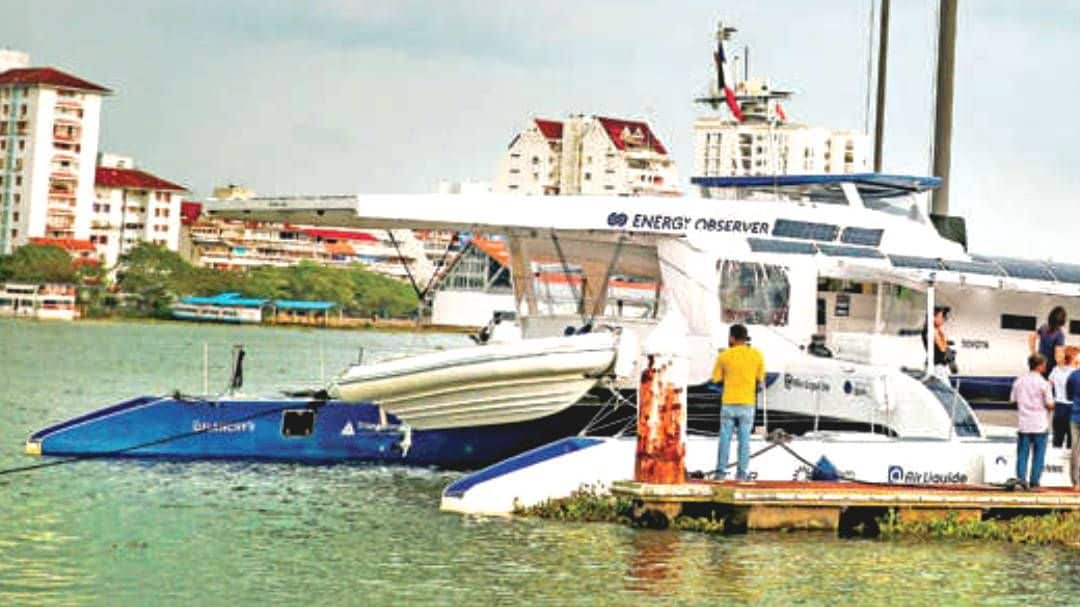 Kochi: Energy Observer, the first zero-emission ship powered by renewable energy and hydrogen, has called at the port of Kochi, its 75th in its six-year expedition around the world to experience and spread the message of sustainable and self-sufficient energy solutions.

The catamaran is the first French ambassador for the 17 Sustainable Development Goals set by the United Nations, and arrived there after 17 days of sailing and 1,645 nautical miles from Langkawi in Indonesia.

On the occasion of the ship’s stopover, the Energy Management Center (EMC), the state-appointed agency to enforce energy conservation law in Kerala, organized an event Special – “Green Hydrogen Pathways for a Sustainable Future”, a forum bringing together many Indian institutions around the challenges of green hydrogen development.

The ship is anchored at Bolgatty Palace and will be in Kochi, the only port of call in India, until November 24. Numerous conferences are organized throughout the port call, including interaction with the crew aboard the ship for students, teachers and researchers from the University of CUSAT.

Victorien Erussard, the captain and founder of Energy Observer, said the yacht, developed in France, had been sailing for five years as a laboratory for ecological transition.

“This stopover will also be an opportunity to welcome on board all the players involved in the energy transition, including the partners of Energy Observer”, he declared to the press on Monday.

Lise Talbot Barré, Consul General of France in Pondicherry and Chennai, said the stopover comes at a time when France and India are strengthening their cooperation to advance carbon neutrality and develop renewable energy.

“I am very happy to present the laboratory vessel for ecological transition, Energy Observer, to our Indian friends in Kerala, this state of the Indian Union so close to the hearts of the French. This stopover will allow us to strengthen synergies between French and Indian players in the fight against climate change,” Barre said.

She added that Kerala’s green hydrogen mission enabled it to be the first state to include hydrogen mobility in its zero emission mobility policy.

“France is investing massively in this area, which opens up new opportunities for scientific and economic cooperation between our two countries. The transition to a low-carbon economy is a priority of the strategic partnership between France and India,” he said. she stated.

Dr R Harikumar, Director of the Energy Management Center (EMC), which is under the Department of Energy, Government of Kerala, said he is striving to achieve energy efficiency in all sectors of the economy of the state of Kerala.

“We are convinced that green hydrogen plays an essential role in decarbonizing our economy and protecting the environment, in the framework of the latest modification of the energy conservation law adopted at the national level, in From this perspective, we are delighted to support Observer’s Energy L’escale by organizing a 3-day workshop that will bring together all the key players at the regional and federal level who are committed to the energy transition,” said Harikumar.

First French ambassador of the 17 Sustainable Development Goals, this world tour also aims to explore all the solutions accelerating the ecological transition and to raise awareness among all audiences, decision-makers and industrialists through a series of inspiring and educational content (documentary films, web series , scientific articles and traveling exhibition, etc.).

The crew allowed the media a peek inside the 30-foot-long vessel which comfortably seats five crew members.

The ship has 202 square feet of solar panels above, which makes efficient use of solar energy. It also has state-of-the-art equipment to collect wind energy. The boat can produce hydrogen directly on board, by electrolysis of seawater.

The crew said they had been sailing on solar, wind and hydrogen power for five years and had sailed for 40 days during the 2020 COVID lockdown without making port.

The ship is scheduled to visit 50 countries and 101 ports, including ports of historical significance, wildlife sanctuaries, nature reserves, endangered ecosystems, in addition to attending international events.

It is the first ship equipped with autonomous means of hydrogen production on board and without greenhouse gas emissions thanks to renewable energy.

The hydrogen produced is stored in a 62 kg tank. The vessel also includes a traction kite and two reversible electric hydrogenation motors, a lithium battery (106 kWh), a watermaker, an electrolyser, a compressor and a fuel cell.

Experience the luxury of the F1 Grand Prix Final