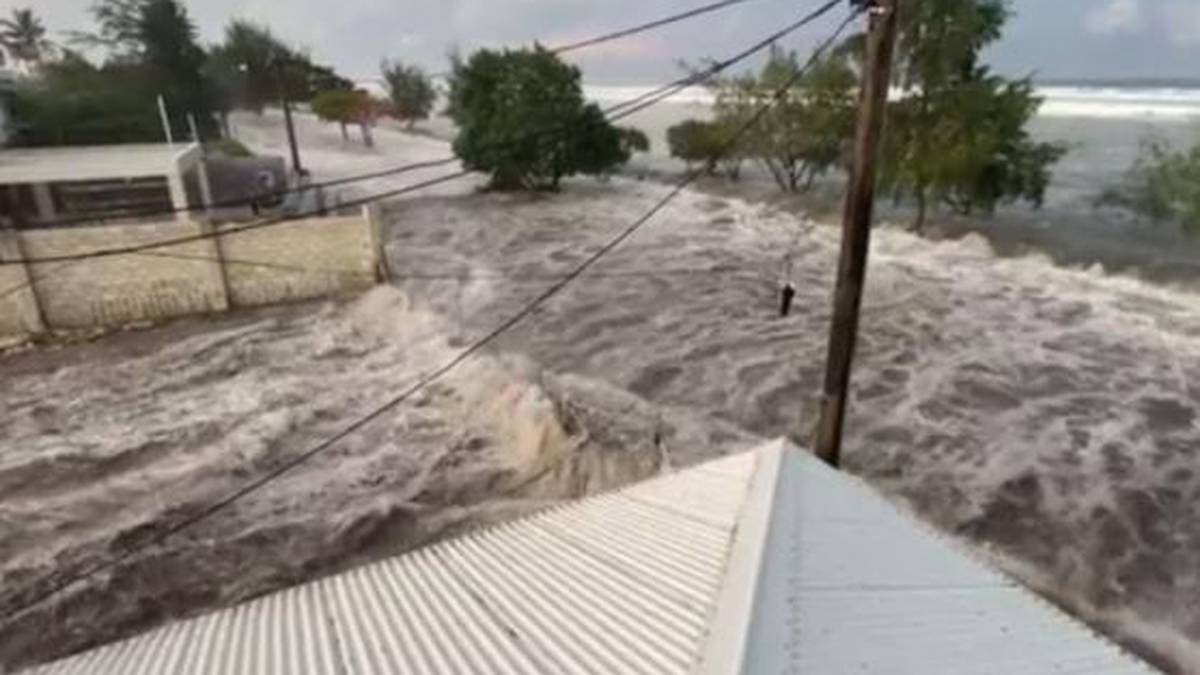 Eruption of the Tonga volcano: families fear for other residents of the small Tongan island of Nomuka

Prime Minister Jacinda Ardern said it was “too early to tell” whether anyone lost their lives in the volcanic eruption and tsunami that hit Tonga. Video / NZ Herald / Dr Faka’iloatonga Taumoefolau / Willy Baptiste Florian / Johnny Teisi / US StormWatch

By Sam Olley of RNZ

A family whose village is one of the closest in the world to the Hunga-Tonga-Hunga-Ha’apai volcano is eagerly awaiting news from their fellow residents of Nomuka Island.

The island is part of the Ha’apai group and is about 70 km from the volcano which erupted for eight minutes yesterday, raining ash and pumice on nearby islands and causing a tsunami of at least 1, 2 m high, which flooded the streets and buildings.

The Sheen family have lived on Nomuka Island since 2014 but are currently in New Zealand for scheduled maintenance on their catamaran.

They run a whale watching business in Nomuka, which has less than 500 residents.

The family visited Hunga-Tonga-Hunga-Ha’apai in June last year and camped at the volcano overnight.

Dave Sheen fears for the lives of the villagers of Nomuka, who live in very “basic” housing.

The highest point on the island is less than 40m above sea level, but there is a telecommunications tower and a house there where people may have taken shelter.

Friends are guarding the property in Sheens which faces the volcano, and a friend was posting a video of the eruption on social media last night when it suddenly came to a halt.

“A video of waves coming into the village. They came in from the small front road and then receded and you could see another wave coming in but then it stopped. And that’s the last time we have heard… We just hope they get to higher ground.”

The Sheens’ home is right on the beach and was damaged last year by waves from Cyclone Harold.

“They actually went through our kitchen and did some damage, and we ended up backing the building up. We didn’t back it up very far.”

Seeing satellite images of the eruption and tsunami waves spreading for thousands of miles around the Pacific Ocean was “ridiculous” for the family, and “it’s not a good feeling”.

“It’s very hard to understand, and it’s even harder to swallow, that we don’t have communications there.”

Sheen said it was “incredible” looking back at camping on the volcano last year, but her family was cautious.

“We had a fast boat, so we had a quick getaway if we had to. We had that plan in place.”

But he said there were signs the volcano was “very ready to go”.

“I was picking up a plastic drum that we found on the beach and putting it on a paddle board…When I picked up the drum with the weight, my feet went into the sand a bit – it’s actually in the sea, about a meter from the shore – and my feet started to burn.

“So the sand was so hot underneath. I had to drop the drum and get my feet off the sand.”

He said Nomuka islanders practiced tsunami evacuations and generally lived “self-sufficient” lives, depending on rainwater and fruit and vegetable plantations for food.

“Who knows what happened with the ashes from those food stores.”

Her daughter, Dior Sheen, said she was “shocked” upon seeing and hearing the effect on Tongans.

She is also worried about her family’s horses, chickens, dogs and cats.

“We just try not to think the worst,” she said.

“We couldn’t reach anyone. I doubt anyone on the island has a work seat. [satellite] call.”

Her “jaw dropped” when she saw footage of the eruption from space.

“I was just like, ‘Are you kidding me? Can you see this from space?’ I think it’s terrifying, but also really fascinating, but really sad and scary for everyone there. We have so many friends there.”