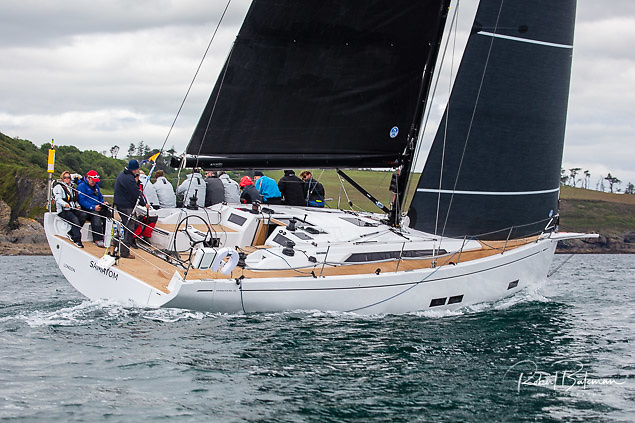 After the excellent performance of the Dun Laoghaire race at Dingle, the Grand Soleil and J Boats brands once again showed their prowess by winning the Sovereigns Cup Overall, placing first and second in the larger IRC — Coastal class, and finishing in all three podiums in the hotly contested Class 1.

As previously reported, the Dun Laoghaire race in Dingle was won by Grand Soleil 40, Nieulargo, owned by the Murphy family of RCYC, who also won Class 1. All of the class two podium places were won. by the Grand Soleil or J Boat models. The J / 99 Juggerknot 2, owned by Andrew Algeo of the RIYC, took victory in the category.

After two weeks, many boats from Dun Laoghaire to Dingle were again in action at the O’Leary Insurances Sovereigns Cup. The two major classes were Coastal which had 17 entries, and Class 1, with 13 entries.

In IRC Coastal Class, the first, second (joint) and third in the Dun Laoghaire to Dingle race were in competition. Bob Rendell’s new Grand Soleil 44, the Samatom, was also competing with cruising headsails in the D2D race. For the Sovereigns Cup, she had her new race sails. A very close regatta in varying conditions over the four days brought very close races, with results on the rope.

The second in the general classification was the Grand Soleil 40 of the Murphy family, Nieulargo. The unique Ker 37, Jump Juice, completes the podium.

The Grand Soleil 40, Nieulargo, owned by the Murphy family of RCYC, finished second in the IRC Coastal Photo: Bob Bateman

In the first class, 10 x J 109 and a new J99 clashed. Mike and Richard Evans, the new J / 99 Snapshot, took the best out of all 10 x J / 109s to claim the class victory by 9 points and in doing so also won the Sovereigns Cup as top artist IRC of the regatta. Second overall was the local club’s J / 109, Artful Dodger, recently purchased by Finbarr O’Regan through brokerage Key Yachting.

A good result for his first major regatta. Third overall, the J / 109 Storm owned by Pat Kelly of Howth.

If you want to compete at the top of IRC races in Ireland, look no further than the Grand Soleil and J / Boats models. Not only are they fast, but they are also very comfortable and are real cruise racers. Key Yachting is also the agent for Nautitech catamarans and Tofinou dayboats.

For more information on any of Key Yachting’s brands in Ireland, contact Key Yachting’s Irish agent, Mark Mansfield, at [email protected] or 087 2506838.