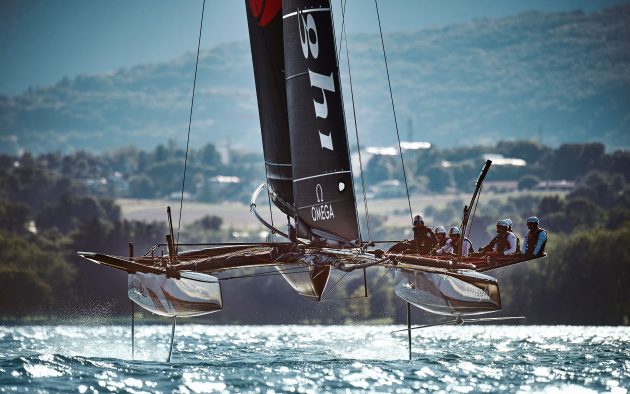 The TF35 is a new one-design catamaran with a unique computer-controlled automatic foiling system, which will participate in the TF35 Trophy. We have all the information on these incredible foiling catamarans

In recent America’s Cups, we’ve seen a small army of crushers pump to put pressure on the hydraulic lifeblood of their flying yacht, while flight controllers attempt to track their ship’s accelerations in three dimensions. But while these athletic and technical skills are impressive, these days there are simply better alternatives to humans who fill these roles. Enter the TF35.

The TF35 is a new one-design foiling catamaran created to take foiling sailing to the next level. He has no hydraulics to keep primed. Conventional ropes and winches handle the sails and the raising and lowering of the foils, but battery-powered electric actuators drive the rest, including split-second adjustments to the foils and rudder risers. In addition, these operations are automated, leaving the crew free to focus on skills such as helm and tactics.

The shape, size and efficiency of the TF35’s foils mean that it only takes seven knots of wind to take off upwind and nine downwind (when the boat speed reaches 2x and 3x the wind speed respectively). It also passes the acidic foiling test upwind and through the edges.

The racks increase the righting moment but also protect the foils next to the pontoons and improve crew safety. Photo credit: Loris von Siebenthal

A small penalty for having such a light wind take-off is the ultimate top speed, which is 18-19 knots upwind and 34-35 knots downwind, but still quite fast.

After the prototype launched at the end of 2019, the new TF35 is experiencing its first full season of competition this year. The class succeeds the D35, the one-design catamaran which served for 16 years on Lake Geneva and countless victories at the Bol d’Or Mirabaud for Ernesto Bertarelli. Alinghi, his sister Dona Ladycat-Spindrift and many more.

“What is my speed? What is the speed? How fast is the boat now ?! â€ Alex Thomson yells into a microphone. Thomson, at the helm …

Since the launch of the Pogo 1 in 1997, the Pogo Structures shipyard in Brittany has won ten of theâ€¦

Aside from becoming fully foiling, a significant difference between the two boats is that the TF35 is designed to race not only on lakes but also in open water, and this year the circuit will include events in Scarlino, Italy in September. .

Behind the TF35 is an America’s Cup-level design team led by Gonzalo Redondo of d3 Applied Technologies, who recently led the CFD team for American Magic. On the structures, the veteran of the Dirk Kramers Cup with the Swiss genius Luc du Bois on the design and the flight control system, as well as the British Adam May, Marc Menec and Jean-Marie Fragniere.

The majority of the components of the TF35 were created in Brittany with Multiplast manufacturing the hulls, the beams by Airbus and Heol Composites manufacturing the complex foils. The spars are from Lorima, with some of the rare non-French parts including carbon diamonds and PBO seat stays from Future Fibers.

Surprisingly, the TF35’s platform was one of its less important parts. The goal was to remove every gram of weight while maintaining a structure rigid enough to prevent deformation due to the high loads of the foil and rig.

The flying center hull of the D35 now ends below the mast with a long, heavily rigged bowsprit protruding more than 4.5m forward of the bow. The rigging is relatively conventional for a modern multihull, with rotary sails and sails which, thanks to the boat’s almost permanent apparent wind angle, are never relaxed far.

To reduce weight, the mast has a diamond pattern and two-piece construction, allowing it to fit into a 40ft container with the boat.

The mainsail is a “deck sweeper”, with part of the foot touching the flat deck of the center hull, creating an end plate to increase the efficiency of the sail. However, this requires an unusual boom – it’s curved, like half of a windsurfer’s triangular boom.

The foil is inside its own box, which allows it to be raised / lowered during maneuvers. Housing can be tilted using a worm drive to change the overall tilt

Naturally, much of the development has focused on the TF35 foils, their operation and software control.

Most other flying cats have J-shaped lifting leaves, with a few “V’s” (dihedral). This shape offers a certain stability inherent in ride height (the more submerged the foil, the more surface there is to provide lift) without requiring constant adjustment.

However, since the foils of the TF35 are computer controlled, this is less necessary, so they can have a more efficient, flatter and less dragging shape, albeit with a massive wingspan of 2.7m.

On most flying catamarans, the lift produced by a foil is determined by its tilt. On the TF35, the rake of the entire foil is controlled by a cable-driven worm drive. This is a wide brush setting, determined by conditions, pace, wave condition, etc.

The T-profiles extend 2.7 m; substantial but necessary to obtain a light take-off in windy conditions. Photo:

The split-second lift adjustment comes from an airplane wing-style flap on its trailing edge that can pivot up to 5 Â°. This required complex construction, but its operation requires much less power than adjusting the inclination of the entire foil.

Compared to the main foils, the TF35’s rudders are a simpler inverted â€œTâ€ configuration with the shaft on each mount in a cassette attached to each transom via studs and pivots.

Like the main foil, the lift is also adjusted by computer / electric actuator via a flap on the trailing edge of the elevator. The amount of rudder lift determines the overall pitch of the boat. This, in turn, affects the tilt of the main foils, so it is vital to cut them together – another job that is greatly improved by automation.

A key feature of the AC50s was the rudder differential – that is, negative lift in the upwind elevator, or downward force that dramatically increases righting moment.

The TF35 also offers a rudder differential, but to a much more limited extent. Automation means the crew only have the option of turning the rudder differential on or off, as well as having just four settings for the ride height and overall tilt of the boat.

This leaves it up to the software to ensure that the foils are optimally tuned and that the rudder differential (where loads can quickly get out of control) never causes structural limits to be exceeded.

The main lifting sheet hangs from the end of a titanium bulb, with its trailing edge flaps almost invisible

The computer is stored alongside a lithium-ion battery in the central flying hull, controlling four electric motors operating trim tabs – a relatively straightforward system. However, the software behind it, monitoring parameters such as ride height, 3D attitude and accelerations with fractional-second precision, is monumental in complexity. It requires a multitude of sensors, from state-of-the-art GPS to ultrasonic altitude sensors and gyroscopes.

While maxi racing yachts with complex hydraulic systems typically use a Programmable Logic Controller (PLC), so the TF35 has a similarly programmable brain, the difference being that it is electronic, controlled via software.

This is especially tested during maneuvers, when the software must recognize when two foils are in the water and the boat is developing twice its usual lift. This software is so vital that it is one of the most stringent unique design elements of the TF35.

As a breakthrough piece of technology, the TF35 is perhaps the first one-design class to have its own operating system.