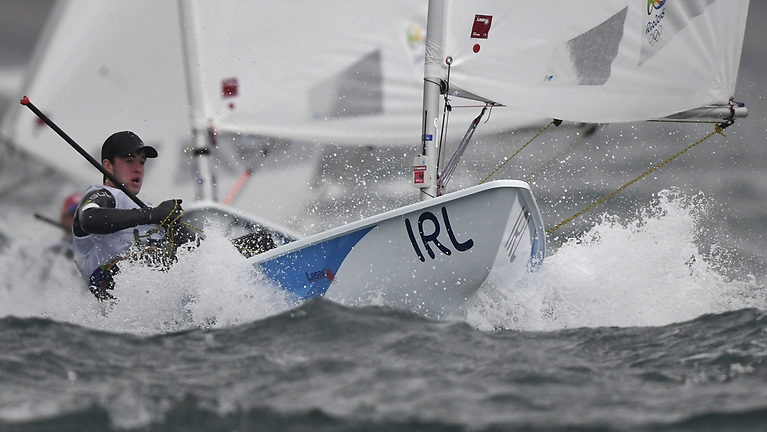 Irish Olympic campaigners have completed the second day of the 53rd French Olympic Week in Hyères on the Cote d’Azur.

Finn Lynch moved from 18th overall on day one to 33rd yesterday after four races in the large Laser fleet of 128 boats.

Aoife Hopkins of Howth in the ILCA 6 (Laser Radial) sits 31st overall in her 64-man fleet.

The Lasers have a maximum of 10 races, or two a day over five days, culminating in a top-ten medal race on Saturday.

The massive regatta takes on added importance in this quadrennial, as Hyères is only 50 miles from Marseille, which is the venue for the Paris 2024 Olympic regatta.

In the 49er class, Tokyo representatives Robert Dickson and Seán Waddilove of Howth and Skerries moved up from 23rd after day one to 18th overall in their fleet of 61 boats. Seafra Guilfoyle and Johnny Durcan of Royal Cork are 29th.

The undisputed leaders of the two male 49er fleets both use old rigs in Hyères, for different reasons, and a major which is the same; reliability. Last year the 49er class announced the switch from Mylar sails to North Sails 3di sails, and the new rig that comes with it also means a shallower spinnaker.

Poles Dominik Buksak and Szymon Wierzbicki, the overall leaders, have regained their old mast and sails after broken spreaders on the new mast during the first race in Palma in early April cost them a place in the fleet. gold.

They had another strong day, which included a third race win and a low of fourth in six races over two days.

The 49ers have a maximum of 15 races, three a day over five days, with a medal race on Saturday.