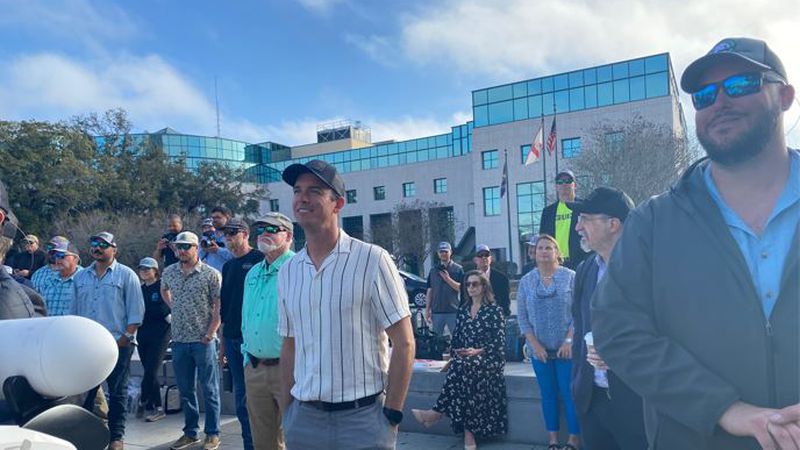 TALLAHASSEE — After overwhelming lawmakers with nearly 40,000 petitions, more than 1,200 phone calls over the past two weeks and a threat of a veto from the governor, clean water advocates declared victory early Thursday on a bill bipartisan bill from Senate leaders to give the sugar industry an advantage in access to water flowing from Lake Okeechobee.

“There were rumors circulating around Tallahassee last night that the cavalry was getting bigger than ever, and it forced their hand,” Captains For Clean Water’s Daniel Andrews said at a Thursday morning rally outside the Capitol. . “And what we saw was an amendment tabled late last night that took the worst of the worst out of this legislation.”

The amendment to SB 2508, approved 37-2 by the Senate on Thursday, would remove provisions from the bill that supporters say led to toxic discharges, more red tide blooms and dead fish on beaches.

Despite the amendment, critics said they continue to have serious questions about the elements of the measure that restrict the flexibility of water managers regarding various projects, and they hope these provisions will be removed. during budget discussions with the House.

The bill, requested by Senate Speaker Wilton Simpson and approved 16-4 by the Senate Appropriations Committee last week, would have required water managers to advocate for more water for agricultural users as a condition to receive state funding for Everglades restoration projects.

The bill has been called a “sneak attack” by members of the South Florida Water Management District, the state agency that works most closely with the federal government on Everglades restoration. .

Gov. Ron DeSantis, who appoints the water board, said the measure was “in the budget process, short-circuiting public engagement and leaving affected agencies in the dark” and hinted to a potential veto.

Water advocates argued the measure would have halted progress made over the past three years in which water managers have changed the approach to managing Lake Okeechobee — which for decades had given preference to the sugar industry – to provide a “balanced approach”. to all stakeholders.

The bill backed by Simpson, a candidate for agriculture commissioner, and sponsored by Senator Ben Albritton, R-Wauchula, a citrus grower, gave the public only one opportunity to comment on the measure and limited the ability of opponents to change it.

District officials said they were ‘blindsided’ by the measure and felt crippled because the Senate used an under-budget bill as a way to change funding for major water projects – building reservoirs in the Everglades Agricultural Zone and Indian River Lagoon, a wetland project for Biscayne Bay, and a seepage wall for Everglades National Park in Miami-Dade County.

You are all registered!

Want more of our free weekly newsletters in your inbox? Let’s start.

Explore all your options

If the bill were to become law, the measure would “starve the Everglades of much-needed water during the dry season and also create a higher lake level as we reach the rainy season,” warned Scott Wagner, vice-president. President of South Florida. Water Management District.

When Lake Okeechobee’s water levels are higher during the rainy season, it will make the lake “more prone to algal blooms and toxic algae,” he said, resulting in algae-laden discharges. from Lake Okeechobee in the eastern and western tributaries.

Wagner said the bill would also “ruin the credibility” of the district’s recommendations with its federal partner, the Army Corps of Engineers, because its funding would depend on recommendations that favor agriculture “even if they are not the best recommendations”.

Within days of learning of the bill, Captains for Clean Water mounted an aggressive campaign to oppose it. The nonprofit Florida Fishing Guides Coalition was formed after the toxic algae crises that led to the Legislature’s passage of SB 10 in 2017, and works closely with boat manufacturers , state chambers of commerce and the Everglades Foundation.

They came in full force at the Senate Appropriations Committee last week, where they ditched their charters for the day and begged senators to back down. But the senators accused them of being misled and of not understanding the statutes.

Eric Eikenberg, CEO of the Everglades Foundation, on Thursday praised Senator Kathleen Passidomo, a Republican from Naples who was vigorously approached by local fishing guides, for helping craft the amendment that removed what he called “bad things”.

As the new President of the Senate and current Chairman of the Rules of the Senate, Passidomo will succeed Simpson and will have a growing ability to influence Senate decisions.

Eikenberg called it a “monumental day” because the “mobilization that occurred hours after that sneak attack” diverted the momentum of the mighty sugar industry into the favor of water advocates.

“The sugar industry is no longer Lake Okeechobee’s top water priority,” he said. In the past, when clean water advocates ran into industry opposition, “we got ripped off,” he said. “The time for getting tricked is over.”

Albritton said the amendment brings clarity and the bill provides “accountability with the federal government over state water rights.”

He said none of the projects “would be jeopardized by this bill” and he does not expect it to result in harmful discharges from Lake Okeechobee to the east and west coasts. But, he added, “Mother Nature is in charge.”

Responding to questions from Sen. Ana Maria Rodriguez, R-Miami, Albritton admitted that some businesses will benefit from the expedited licensing process under the bill.

They will include “large-scale treatment plants that have a regional impact” and “utility companies”, he said.

At the rally, Eikenberg praised the captains for their quick mobilization and pointed to the fishing boats parked in the plaza outside the Capitol, saying they are essential to “the 21st century economy in this state.”

Tyler Capella, a charter fishing captain from St. Petersburg, said the experience led him to conclude that what’s happening on Capitol Hill “isn’t a democratic process.”

“It really shows the power of special interests over the will of the people,” he said. “It’s just so that a few senators here who have received campaign contributions of $100,000, $200,000 from the sugar cane companies will slip those bills in at the last second.”

“We have more than three weeks of session left,” he said. “And we are surprised all the time here. So stay engaged. It’s not over yet. Stay engaged, pay attention.

Cover of the Tampa Bay Times Legislative Assembly in Florida

Subscribe to our newsletter : Get Capitol Buzz, a special bonus edition of The Buzz with Emily L. Mahoney, every Saturday during the Legislature meeting.

We work hard to bring you the latest news from the state legislative session. This effort requires a lot of resources to gather and update. If you are not already a subscriber, please consider purchasing a print or digital subscription.

Flying Fifteen Class in Cowes for an exceptional anniversary year