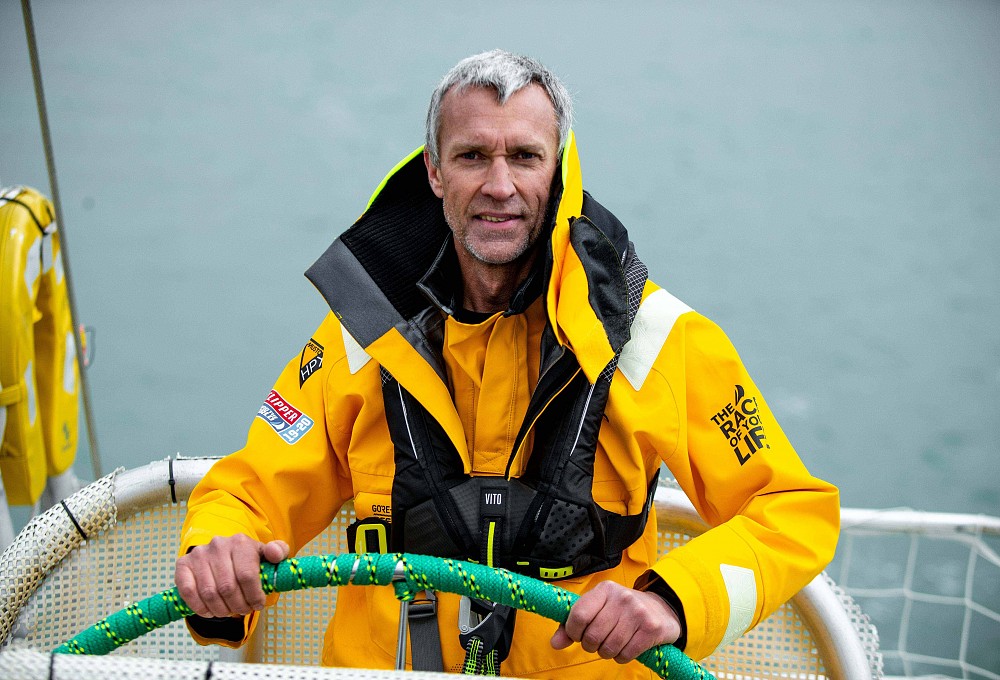 Guy Waites, former Clipper racing skipper takes on one of the most remarkable sailing challenges on the planet – the Golden Globe Race.

It’s a challenge that’s at the heart of the Clipper Race. Its first edition propelled founder and chairman Sir Robin Knox-Johnston to fame as he was the only participant to complete it in 1969. After winning the event, he became the first person to sail solo , non-stop around the world.

Guy and his 16 other participants sail without modern technology or the benefit of satellite navigation aids. Paying homage to the original race, the Golden Globe Race (GGR), which started on September 4, limits its competitor to sailing similar yachts and using equipment that Sir Robin had in that first race.

Before he left, we caught up with Guy in Les Sables d’Olonne, France, as he made final preparations for the 2022 Golden Globe Race

Guy uses a sextant during the 2019-20 Clipper Race

How long have you been preparing for the Golden Globe Race?

Well it’s been on my mind for years and years but the planning started in 2019 but we didn’t get the boat until early 2020.

What makes it different from other races around the world?

Boats must be relatively ordinary fiberglass cruisers that were designed before 1988. They must be between 32 and 36 feet long with a long keel. You are not allowed to use expensive and exotic materials like carbon fiber. It’s a back-to-basics race that tries to recreate 1968 as faithfully as possible.

What is your sailing background? How did you get here today?

I started sailing 30 years ago and first got into keelboat racing. I gradually climbed the ladder and obtained qualifications until RYA Yachtmaster Offshore. I’ve always been fascinated by single-handed races – the OSTAR, the Vendée… any transat! I followed them for years and years and I knew that one day I would like to do something like this. In 2010 I first bought my own boat and sailed it solo across the Atlantic in 2011. I have sailed the Atlantic five times now solo.

Then in 2018, my wife Julie and I had followed the 2017-18 edition of the Clipper Race because Julie had to participate in stage 8. But I ended up joining the race myself as First Mate (AQP ). I reached Airlie Beach in Australia (stopover in the Whitsundays) and sailed to the finish! This encouraged me to apply to be Clipper Race Skipper for the next edition and I was the skipper of the Dare To Lead team until the pandemic stopped the race. That’s when I found my GGR boat, Sagarmatha, and started getting it ready for this race now.

What is it about running alone that drives you to participate in events like this?

The first reason has nothing to do with sailing – even as a young child I would go out on my own without a care in the world. My parents should have looked high and low for me – so I’ve always been very comfortable in my own skin.

It’s not that I don’t like other people’s company – which is great when you’re skipper of a Clipper 70 with 20 crew on board – but I’m very good about myself. I don’t mind being alone – I appreciate the skill refinement to handle the challenge. This is the draw for me.

What preparation did you do before the GGR?

Sagarmatha was stuck in Panama with the borders closed so I spent the first seven months of home confinement thinking about all the things I was going to do – I wrote many lists and found some of the traditional sailing gear we needed to respect this race.

Eventually I arrived in Panama to get my hands on the boat and sailed the Caribbean Sea and the Atlantic as part of the qualifying process. I learned as much as possible on the boat.

Having sailed the Southern Ocean with the Clipper Race, I am fully aware of what it is and am now doing it on a boat half the size and on my own. It’s not like a double whammy, it’s like a quadruple whammy!

What challenges did you encounter on this trip?

This was my first time sailing Sagarmatha, I was alone and sailing the Atlantic in the winter months which is not ideal. About 80 miles from the Azores we encountered a storm from the east and I had to turn back to the United States for a few days when we were knocked down and damaged the mast – which I knew was weak as it was the 1993 original. was a challenge just to get the boat back let alone get the funds to get the boat ready and be here to race.

What mental skills have you learned to stay calm in these situations?

You can’t do anything about bad weather. When it comes, it comes. You live a lot in the moment. You may have all the planning and preparation in the world, but you don’t know when it will happen or what will happen when it does – you have to face it as best you can at the time and protect yourself so to be physically and mentally in the best possible position. It’s like meditation! You need to be on top of your own mental well-being.

Guy on board Sagarmatha

Tell us about Sagarmatha?

It was the original boat of John Rock – the designer of the Tradewind 35. It was later sold to a British company who took it to New Zealand. They then sold her to Don McIntyre, founder and Race Chairman of the Golden Globe Race who intended to enter the then named yacht, Silver Heels, in the GGR. The yacht was then sold to Kevin Fairbrother who entered the race (GGR) in 2018. The reason the yacht is now called Sagarmartha is the Nepali name for Mount Everest and Kevin has climbed Mount Everest four times – Julie and I love the name so we kept it. I even kept the number – 13 – I’m not superstitious!

What will GGR check before you leave?

The GGR inspects boats for the green card which is essentially your green light to race. They go over all the qualifying elements for the race – not just the equipment but also the structure of the boat. The onboard safety kit, ensuring you have the right EPIRBS, satellite phones, searchlights, VHF – the list goes on! Although the race is not externally regulated, the FFV which oversees the Vendée Globe race reviewed the race regulations in 2018 and said they were the highest level of safety specification ever seen for a race. It’s very intense, long and expensive, but it’s for our safety.

What route are you going to take?

It’s the classic Clipper Race route – south to Brazil, then to South Africa for a media drop, to Australia and to Hobart – for a media drop. Then we pass under Cape Horn – another media drop in Punta del Este, Uruguay, then back over the equator and back to Les Sables d’Olonne.

Media drop points are designed to put back the tape recordings and media we make along the way – everything is done on old gear to recreate the original ride, so this will be a chance to put it back . A support boat will do Facebook Lives when we get to these points.

What equipment is on board?

HF radio and VHF radio on board – this was what was available in the late 1960s. We have satellite phones but can only talk to the medical team if we need to, or the race office. We have trackers so you can see where we are. But none of the technologies on board benefit us in terms of navigation. There is equipment that would relegate me to the Chichester class if I needed to use it – two portable waterproof GPS positioning systems, an emergency water jerry can, a water maker or any stop anywhere would also relegate me.

How will you get water?

The only way worth talking about is to get it back in the mainsail. I don’t think you’ll find anyone whose mainsail has a sponsor’s logo on it because the water would run off the dye and end up in your drinking water.

But I don’t intend to wear myself out in the first place – I’m taking it quite a bit.

Tell us about the food preparation you did?

My food is split between freeze-dried and canned. Freeze-dried is light and takes up little space but needs water to rehydrate it, so you’re literally eating into your water supply. The advantage of canned food is that it does not need to be rehydrated and the water is drinkable. It’s all one pot cooking, I have a single burner stove. I just ate it out of the pan.

My sister Heather made fruitcakes using our mother’s recipe. It’s been a tradition for some time – she’s done it for the Dare To Lead team as well. So I have that on board. A former member of the Dare To Lead team, Theresia Cadwallader, cooked her pancakes – I have a big box of them. But otherwise there are not so many sweet treats.

Which elements of the traditional kit are you looking forward to using and which modern gadgets will you miss the most?

I’ll answer the last part first: a chartplotter! We are all used to looking at the LCD screen and knowing where we are 24/7.

Can’t wait to use the sextant – it’s not just a necessity but a good friend. I have a spare just in case.

What do you have with you for entertainment?

There will be enough to think about just sailing! I don’t take a cassette player but I have a shortwave radio, and the variety on this as we travel the world will be far greater than any cassette.

The only books I have are for navigation. There will be plenty to do.

Who is your support team?

My wife, Julie, is my team leader. She was a huge support. I will have been away for most of the year in total. The Scarborough Yacht Club has also been great in helping me. I sold my house to get to the starting line – and it still wasn’t enough! So I’m grateful to all my sponsors who brought me here too.

There are former Clipper Race team members who have also come here to support us, which is great. The Clipper Race family is huge and that’s great – they’ve been very supportive helping out financially too. It wouldn’t happen without them.

How do you feel now?

I think you can be ready for too long – the boat will never be ready! But no, it’s falling into place, I also had free time to spend with my friends and family.

Home for everything is here GGR website and social channels. You will get links to live streams, and cconstant position reports every 4 hours. There will also be the satellite phone calls and Twitter messages we send.

And a question from Sir Robin himself

What did you learn from the Clipper Race that will help you for the GGR?

The experience of Southern Ocean has been invaluable. In addition, the air temperature changes the way the wind inflates the sails. I haven’t experienced this anywhere else in the world and I wouldn’t have this if it weren’t for Clipper Race.

Good luck to all at Clipper Race – we’ll all be following Guy closely as he embarks on the remarkable Race to the Golden Globes.