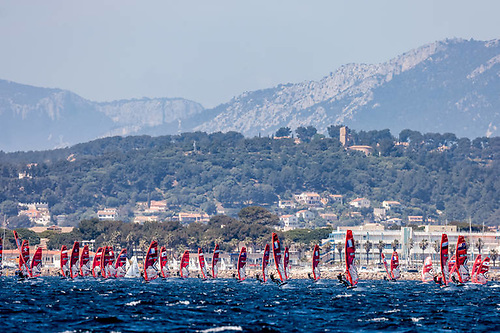 The 53rd Hyères French Olympic Week – TPM opened on Monday 25 April in classic Côte d’Azur style with the world’s best soaring in the strong winds through a field of 751 sailors from over 50 countries . It was as if they had never been absent.

After missing two years due to COVID, this was the most welcome and spirited return for a place and an event that means so much to so many people.

Rough seas, especially as the less protected courses to the east of the bay and the Golden Islands, as well as gusts of wind between 25 and 30, kept everyone on their toes.

The world and sailing have changed since the last French Olympic Week in Hyères in 2019. The 10 classes that will be contested in Marseille for the Paris 2024 Olympic Games took place in Hyères, just 50 miles west of the coast , for the first time. weather. And it was flight time for the five classes of foils presented.

The quality of competition across all fleets was immediately apparent early in the day in the Men’s ILCA 7, where Australian Olympic Champion Matthew Wearn and German 2020 World Champion Philipp Buhl traded wins at leading a lead group that dominated both races.

“Today was very very beautiful, I like Hyères and I prefer a windy Hyères to a sweet Hyères,” said Buhl, who has a particular reason for having a soft spot for Hyères.

“It’s kind of funny to see the results seeing Tom Burton, Slingsby – Matthew Wearn was in the fleet. So, I have very fond memories.

Race against the backdrop of the magnificent Côte d’Azur | Credit: FFVoile/Sailing Energy

Irishmen Ewan McMahon and Finn Lynch are also competing in the ILCA 7 class, who sit 18th and 34th respectively overall after two races.

Other Irish contenders to watch this week are Aoife Hopkins in the ILCA 6, who currently sits 17th overall after his first two races, plus two contingents in the 49er.

Robert Dickson and Seán Waddilove are 23rd overall after two races, with Seafra Guilfoyle and Johnny Durcan not far behind in 27th. See the full table of results HERE.

Parking restrictions (and some tips) for the Annapolis Spring Sailboat Show