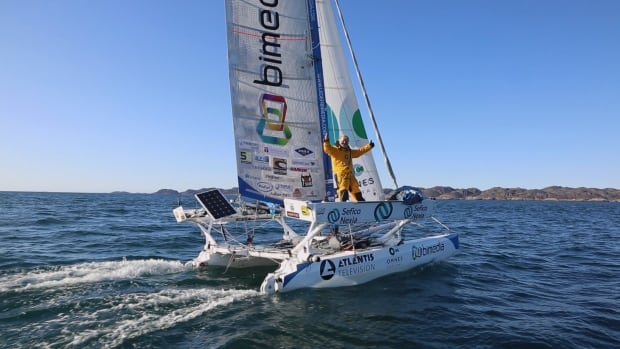 The man at the center of a Northwest Passage controversy says he’s neither a cheat nor a liar – and he never claimed to have set a record with his solo catamaran crossing in 2017 .

Frenchman Yvan Bourgnon says he is shocked by accusations circulating in the French media that he embellished the facts of his crossing, cheated during a record attempt and then tried to cover it up.

Of course, he tried to bring the story to life for those he told it to, said Bourgnon – who wouldn’t, after sailing 7,500 kilometers through treacherous Arctic waters in a boat without a cabin?

“Isn’t that what every adventurer does when describing his journey? Bourgnon said in a written response to the charges.

“Telling, bringing the story to life in order to share it, give it meaning, make the moment feel, this is the very nature of adventure storytelling and in no case does it deserve to be accused of cheating or lying.”

At the heart of this bizarre controversy are French newspaper headlines and articles that confuse two topics: a trial currently in French courts and accusations that he fabricated or lied about aspects of his trip.

A meeting in Taloyoak

Bourgnon spent 71 days at sea aboard his catamaran, My Loulouttefrom July 2017.

On his sitethe skipper compiles a list of trip highlights: falling overboard at Prudhoe Bay, colliding with a walrus after Bellot Strait and discovering a polar bear with its paws on Mom Loulouttenear Qikiqtarjuaq, Nunavut.

On September 26, 2022, the French daily Le Figaro published an investigation casting doubt on some of these claims. The inquest questioned Bourgnon’s polar bear encounter, pointing to the lack of scratches on the catamaran, and asked why the on-board cameras that were being used for a documentary all fell into Bellot Strait (this which, according to Bourgnon, was due to the difficulty of charging the batteries on board).

It also resurrected claims that Bourgnon lied about setting an official record for the first solo crossing in a catamaran without a cabin, which would have required him to sail the route unaided without setting foot ashore.

This indicates the time he spent in Taloyoak, Nunavut, and the help he apparently received from some other sailors, accusing him of trying to hide the two facts so he could claim to have marked the history as the first person to sail the Northwest Passage solo on a catamaran. .

He cites an email in which Bourgnon allegedly asked Pierre Guyot — the documentary film producer who is now suing him — to be discreet about a meeting they had in Taloyoak where Bourgnon spent several days.

In an interview, Bourgnon told CBC that he never tried to hide the fact that he stayed in Taloyoak. He talked about it openly in his 2018 memoir, ice conquerorwhere he described sleeping in a “shack” for four nights.

Although he gave an interview to Radio-Canada in September 2017, while describing his trip as an attempt to set a record, Bourgnon told CBC that the record in question was just a dream – a dream he knew had failed when he left. stopped in Taloyoak.

Because of that, he never asked for the record to be certified, he said.

“I said, ‘OK, I put my feet on the ground, so I didn’t respect things to make a record,'” Bourgnon said.

“For me, that was not the main thing. The main thing was to have an adventure, to take on a challenge, to be alone with a small beach catamaran there.”

However, his website describes him as “the first skipper to cross the Northwest Passage on a single-handed sport catamaran, with no cockpit or assistance”, and the website too for the Bimedia Challenge — which is the challenge he set himself.

Chuck Pizzo-Lyall, the mayor of Taloyoak, remembers meeting Bourgnon and Guyot when they stopped there in August 2017. He said Bourgnon spent about a week in the community.

There is a small secluded bay nearby, where boats can shelter from strong winds and waves. Pizzo-Lyall said he helped tow them to that safe harbor and then towed Bourgnon.

“We saw it take off on the horizon,” he recalls.

“I’m really glad he pulled it off… Doing it alone has its own mental health issues, especially if you’re facing North – whether it’s the weather or the mental well-being of being alone there, the polar bears and all that wildlife that we have up north, it’s basically bigger and can eat you no problem,” he said.

Bourgnon is facing a lawsuit in connection with his crossing of the Northwest Passage — essentially, a fight over who owns the rights to footage filmed during his trip for use in a documentary, he said.

This case was heard by the Paris Intellectual Property Court on October 6 and a decision is expected on December 6.

Pierre Guyot – who Bourgnon says was a longtime friend before they fell out – and French production company 10-7 Productions are suing Bourgnon for 280,000 euros (nearly C$380,000).

Reached in Paris, Jean Aittouares, one of Guyot’s lawyers, told CBC that Bourgnon tried to get Guyot to hide certain aspects of the trip, like that fateful stopover in Taloyoak that disqualified Bourgnon from setting a record. Guyot didn’t want to lie, and the resulting conflict between them prevented Guyot from making his documentary, Aittouares said – then, without credit or permission, Bourgnon used the footage from the trip for his own benefit.

“He trampled on Guyot’s work initially, ousted him to punish him for his integrity, then violated his rights by exploiting the documentary for his personal needs and deriving personal income from it,” Aittouares said in French.

“Then he implicated Guyot in what had already cost him his participation in the film by making him endorse the lie he had uttered.”

Bourgnon said the courts only rule on the matter of rights, and do not rule on any of the other charges.

The Northwest Passage is a notoriously difficult journey. This year, two Brazilian sailors attempted the feat in a catamaran but had to turn back before finishing, citing the delay in the season and bad weather.

The first successful sailing crossing, which began in 1986 and spanned three summers, also documented the dangers of the journey. Sailor Jeff MacInnis wrote about bears, blizzards and 15-foot waves in his memoir, polar crossing.

And of course, John Franklin’s famous 19th century Arctic expedition trying to discover the Northwest Passage ended in the death of him and his crew, and still fuels the imagination of explorers today.

Sailors make regular stops in Nunavut communities en route. In September, a Texan sailor hoping to navigate part of the Northwest Passage had to seek help from the residents of Kugluktuk after his boat cracked.

Bourgnon said his trip and stopover in Taloyoak gave him the chance to meet and talk with Inuit and discuss his great passion: the ocean. These interviews gave him perspective, he said, for his eco-friendly work with The SeaCleaners, which works to protect the oceans from plastic pollution.

“I had a very good experience,” he said. “It was very interesting to talk with them and understand what is going on.”

As for Chuck Pizzo-Lyall, the mayor of Taloyoak, he says he is delighted with the interest of navigators in the region, but admits that the recent increase in maritime traffic worries him.

“Trying to rescue someone by boat who is 200 miles from our community can be very complicated,” he said. “The weather fluctuates wildly here.”

Merlin Kolb, “Captain of Bodega Bay”, remembers being “a hell of a man”