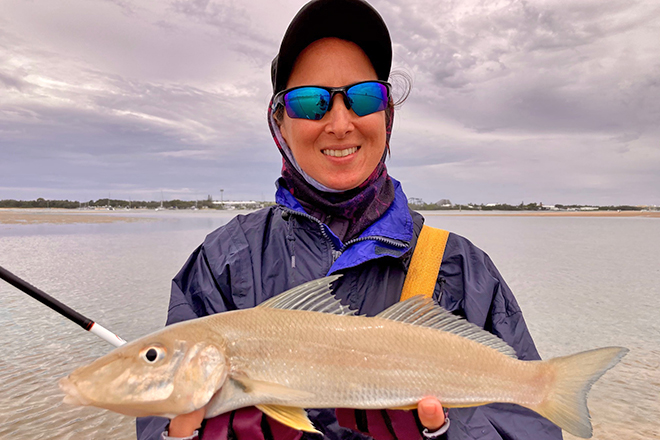 Hello everyone, I hope you all had a good week. The rain has been fairly persistent this week with fairly heavy falls around the Gold Coast. At the time of writing my report, weather conditions of moderate wind and rain appear to persist until early next week. Saturday seems the choice of days with a strong change towards the south which should settle on Sunday. Let’s take a look at a few options if you want to wet a line this week. Gold Coast Coomera Fishing

The weather for offshore fishing has been fairly consistent over the past week, with good catches coming from fishos on the Gold Coast. The closest 18-24 fathom line produced good mixed bags of large snapper, jewfish, teraglin, tuskfish, Moses perch, Maori cod and tailor. An early start is important when aiming for close bottoms as the fish seem to respond well to the dawn bite and it also doesn’t hurt to try and beat all the other boats going in search of. a little action. I always recommend spending time probing the reef to try and find as much life as possible to anchor or drift. You are looking for signs of baitfish and stronger fish arches that will indicate predators are in the area to be hunted. The floating liner is the most productive method of fishing and will generally always produce more quality fish than a paternoster style rig in shallower depths, as the bait is lowered more naturally, triggering a strike in descending. Whole Western Australian sardin, whole large squid, mullet fillet, bonito fillet, or live or dead yakkas are my pick of the best baits to try. At this time of year, 36 and 50 fathom line fishing is very dependent on the current. If you can crack a day there will be little to no current, the groundfish should be excellent for producing samson, amberjack, amberjack, perch and snapper. If the current increases, it will be worth taking a look around the fish aggregating devices, as a few dolphinfish rats have started to appear. Gold Coast Coomera Fishing

Fishing at Jumpinpin the Broadwater or your local rivers and estuaries this weekend will depend on how much rain we received during the week. At the time of writing, the end of the week appeared to be the wettest with a large amount of rain. due to the fall. If you are looking to target a bream feed, rivers and estuaries will be your best bet after rain as they seem to light up and feed well. The Nerang River, Tallebudgera Creek, Currumbin Creek, Coomera River, Pimpama River, Jacobs Well, Cabbage Tree Point, and Logan River are all expected to produce food. Try using shrimp, white sardine, blue bait, red mullet fillet, and yabbies for the sea bream. Closer to the ocean inlets, it will be worth taking a look if you are looking to target larger predators as they will frequent areas with better incoming water and fresh water. that comes out of the system will tend to concentrate the bait banks on the tide. In turns, you should find flathead, squire, trevally, jewfish and tailor. Fishing with live bait such as herring, silver bidies, pike or mullet should do the trick. Gold Coast Coomera Fishing

Clint of Brad Smith Fishing Charters reports that we have been pursuing the monster whiting on the flats harshly. We are now in high season for these magnificent fish until February of next year. Last summer, on fording boats, we caught about 30 whiting over 40 cm long and we lost count of those over 35 cm. The Gold Coast is an upscale fishing destination for huge sand whiting and so far this summer is shaping up to be bright again. The water temperature around some apartments was as low as 20C this week which appeared to delay the whiting. Once we found an area with a temperature of 23 ° C or higher, that was the game. The canals have been quiet lately with smaller fish, we need heavy rains to flush things out. The almanac looks weak on average this week, but if the fish are hungry, they will eat.

Brad of Brad Smith Fishing Charters reports once again that I spanned the week fishing both the Tweed and the Goldy. The main species caught were flathead, with most fish being of very good quality, averaging around 50 cm. The flatties smashed the Slam minnows on the troll and mocked both the Ecogear ZX40 and Samaki Vibelicious lures bouncing along the bottom in the deeper holes and channels. The other species captured were beautiful giant trevally which are incredible sport fish on light tackle. We also spotted hammering birds and baitfish that we initially thought were jacks but ended up being school mackerel.

Gavin of Sea Probe Fishing Charters reports that there have been a lot of dolphinfish around all FADs this week, also still snappers, pearls and kings. It feels good to see a few black marlins start to appear along the 50 fathom line on lures and also live bait in the usual places. Of the 24, a lot of trag bit with some nice snapper.

Stay up to date with all Queensland fishing regulations https://www.daf.qld.gov.au/business-priorities/fisheries

Seabreeze is a great website for accessing local forecasts http://www.seabreeze.com.au/graphs/

Good luck with the fishing.
Brett