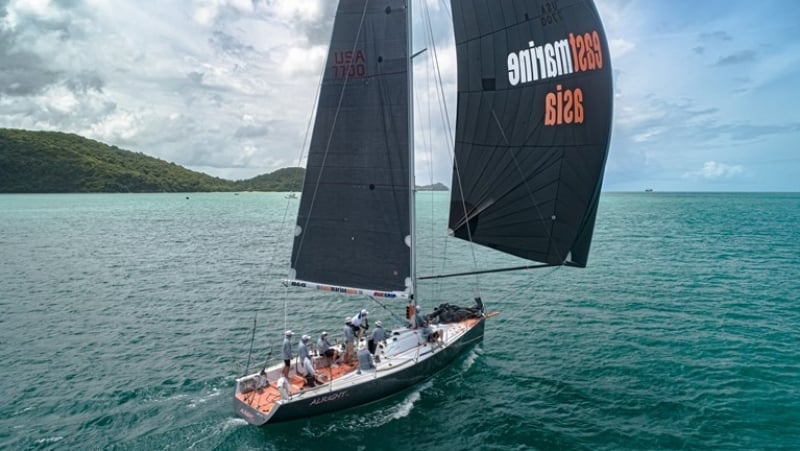 SAILING: Head Race Office Simon James launched the 19th Phuket Raceweek fleet yesterday (July 1) at the same location as day one, just south of Koh Lan off the south coast of Phuket. The wind was light at six to eight knots for the first leeward-windward race, but rose to 12 knots by the time Simon started the second race, which saw the sailors circle Chalong Bay.

James Bury and Craig Nichols’ Very well stole the thunder in the IRC Zero class, winning both races with Ray Roberts Hollywood Team taking second place. by Garry Holt let’s goa Corby 36, obtained two third places, while the fourth boat in the class, the Douglas/Kettlebey Baguettea Farr 40, was able to sail, get his hands on a set of sails and settled for two fourth places.

by Niels Degenklow Phoenix and APW by Stuart Williamson Whitby effort traded positions, with Phoenix winning both races in the IRC six-boat and APW cruising monohull class Whitby effort comes second both times. by Toshiro Furuta Sakura had a good day finishing third both times, while the Russian crew of Kirill Stashevsky on Agate had two fourth places. Fred Haes’ Company and Kampon Sutara The bride of Kantous swapped fifth and sixth places to complete the class

The Racing Multiclass class saw Dan Fidock’s Extreme 40 Parabellum do it again, taking line honors and winning both races as spectators watched in awe as he raced across the water. Warwick Downes’ Good was next, claiming their second and third places, and drawing a healthy amount of gasps with her hull lifts. by Alan Carwardine Saffron finished third overall for the day with a fourth and second place finish, and Glywn Rowlands Tornado 2 finished third and fourth to finish fourth overall and complete the four-boat class.

The four-boat Firefly 850 Sport boat class saw John Newnham twin sharksby Hans Rahman Voodooby Ray Waldron surf patrol and George Edding blue nose finish one through four in that order in both races. The first three boats all have experienced crews who have all sailed Fireflies together before, while blue noseThe crew of have been reunited for the first time and are still finding their way and getting used to Mark Pescott’s design and Mark Horwood’s construction.

The race continues today and tomorrow (July 2-3), with the sailors disembarking for a banquet and prize-giving this evening at the venue at the Cape Panwa Hotel.

Today’s race and prizes are sponsored by Alan and Roger of Asia Catamarans.

Tomorrow is the final day of racing and an evening under the stars as the 19th Phuket Raceweek 2022 at the Cape Panwa Hotel draws to a close.

US Sailing convenes panel on death of Newport in Bermuda