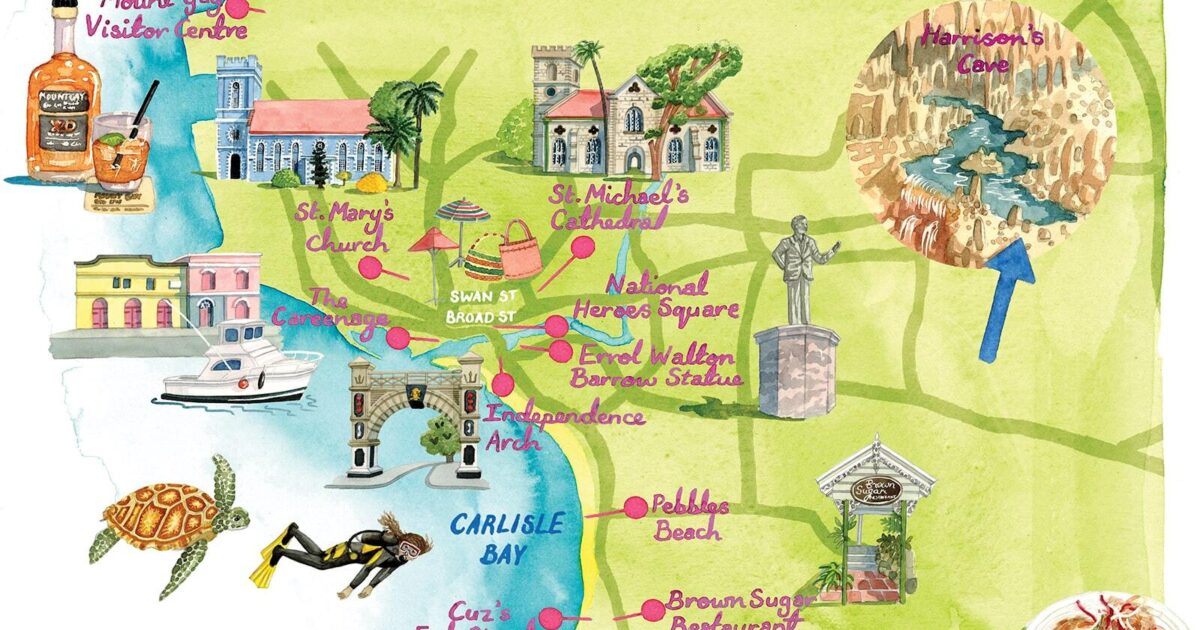 Holidays in Barbados: what to see, do and eat in…

Bridgetown, the capital of Barbados, offers the perfect cocktail of colonial heritage and Caribbean freshness, plus sensational rum, sun and seafood. This is what to do, see and eat there.

Bridgetown is a port town on the southwest coast of beautiful Barbados, a pear-shaped island so small you can walk around it in a matter of hours. A British colony for over 300 years, it was once of great importance in the sugar trade.

Barbados is sometimes referred to as Little England, and if you spend a few hours exploring its bustling capital, you’ll understand why.

The island is administratively divided into parishes and parts of the landscape could almost be Devon or Somerset. While the climate is sure to be warm enough for any sun-hungry Briton, even temperatures are milder here than in most Caribbean hotspots, with the golden beaches fanned by the easterly trade winds.

To see the sights, take advantage of the excellent duty-free shopping, then pour a Banks beer – or treat yourself to a potent rum cocktail – and sit down to enjoy that famous Bajana hospitality.

What to do in Bridgetown

Today, luxury yachts and catamarans line Bridgetown Marina, also the site of the original wooden bridge from which the town takes its name.

Originally, it was the main port of the island, where ships were “streamlined” on one side for repair, cleaning and painting. Today it is a beautiful promenade which houses restaurants, bars and shops in what were once warehouses and shops selling produce.

Built in 1825 to serve the island’s growing urban population, Bridgetown’s oldest church stands opposite the impressive Town Hall and peaceful Jubilee Garden, one of the few public green spaces in the city center.

Several notable Barbadians are buried here, including national hero Samuel Jackman Prescod, the first man of African descent to be elected to the island’s parliament.

Behind its pretty Georgian neoclassical facade, the cool blue and white painted interior offers a welcome respite from the heat and bustle of the capital.

The church tower clock was a gift from the famous local department store Cave Shepherd, for the princely sum of fifty thousand Barbados dollars.

– READ MORE: What to do in Barbados – travel guide –

Formerly Trafalgar Square, it is a one-stop-shop for monuments in Bridgetown. There is a statue of Lord Nelson, erected some 27 years before the London version, and a cenotaph war memorial dating from 1925.

You can also visit the National Heroes Gallery and the Parliament Museum, and nearby is the coral stone St. Michael’s Cathedral with its stunning stained glass windows.

A ten-minute cab ride from central Bridgetown, Rockley Beach (also known as Accra) is a favorite spot for families with safe swimming and plenty of places to eat and drink. Otherwise, head to the crystal-clear waters of Carlisle Bay to enjoy one of the best scuba diving in the Caribbean.

What to see in Bridgetown

Prime Minister when Barbados obtained sovereignty from Great Britain in 1966, Errol Walton Barrow is known as the father of independence. Today it is commemorated on Errol Barrow Day – January 21 – and by this imposing 9 foot bronze sculpture in Independence Square.

Located at the southern end of the Chamberlain Bridge, Independence Arch was built in 1987 and represents various emblems of Bajana heritage and culture, including the peacock flower – aka the pride of Barbados – and the national symbols of a pelican. and a flying fish.

Deep beneath the island’s central highlands, some 700 feet above sea level, lies an incredible underground world of tall caverns and milky white stalagmites.

Over a kilometer and a half long, this incredible cave system was rediscovered in the 1970s and today you can visit it by underground tram. When you step out, you can take in the air on a walking path with stunning views of the lush island landscape below.

Where to eat in Bridgetown

If you love seafood, you’ll be spoiled for choice in Bridgetown, with many restaurants offering excellent versions of local dishes such as flying fish and neck-neck (much like polenta) . To familiarize yourself with the flavors of Bajan, head to Brown Sugar for their famous All-You-Can-Eat Planter’s Buffet.

It might not sound like much, but this take-out shack is on many visitors’ must-see lists for a reason. Quite simply, Cuz’s branded â€œFish and Cheese Cutterâ€ might be the most delicious sandwich you’ve ever eaten.

On the other end of the scale, there’s food – and a setting – to celebrate at this gorgeous beachfront restaurant.

Light lunch bites include coconut shrimp, crab pancake, and chicken taco with pickled mango, but why not push the boat up and go to dinner of roasted barracuda or spiced pork tenderloin? It’s not cheap and you’ll have to hop in a cab to get there, but if you’re looking for something special, Champers won’t disappoint.

Where to shop in Bridgetown

With visitor discounts of up to 40% on a wide range of merchandise (just show your passport and proof of departure at checkout), Barbados is a bargain hunter’s delight. Check out Bridgetown Duty Free (the former Cave Shepherd department store) on Broad Street, where you’ll also find several shopping malls.

Head to Woolworths (yes, they still have it here) for a bargain pick, or get lost among local shoppers at the colorful Swan Street Market, parallel to Broad Street.

– READ MORE: Find the cruise of your dreams with our handy vacation finder –

The history of rum is the history of the Caribbean, and here they have been making golden nectar for over 300 years. Take a tour to find out how they do it, stay for a tasting, then stock up on samples and souvenirs at the visitor center shop.

You can even linger for a gourmet lunch – but remember that a typical rum punch recipe is â€œone sour, two sweet, three strong and four weakâ€, so it’s likely to do well. name. Maybe don’t plan on doing too much for the rest of the day.