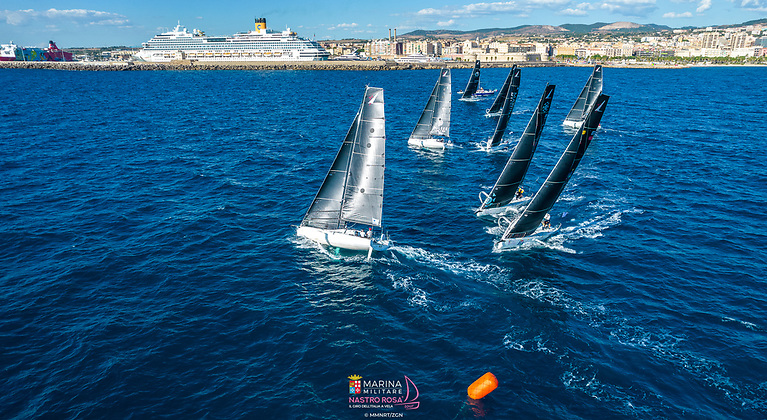 When the final stage started at lunchtime on Friday, Rossi and D’Ali were slow to come out of the starting blocks of Marina di Ravenna’s 100-mile night race, but the Italian duo launched their Figaro 3 keelboat, ITA1 Team ENIT, on the move. and took the lead at the halfway point.

The rising sun struggled to break through the Venetian morning mist, but emerging from the gloom in the lead was the ITA1 ENIT team, crossing the line first and winning the league title. Four minutes later, the Spanish ESP team moved up to second, followed by the Belgian team who took third place just four seconds behind the winner of the previous stage, ITA2 Marina Militare.

When the boats arrived at the breathtaking military basin in the heart of Venice, the Arsenale di Venezia, there were few smiling faces. Venice’s final approach involved navigating around a myriad of restricted areas due to oil rigs and other marine furnishings, and some teams protested others to seek clarification on whether others had violated the restrictions. There was no clear winner yet.

After a few hours of intense but friendly deliberation with the international jury, several teams received penalty points for navigation errors. For Rossi and D’Ali, the champagne remained frozen until the end of the protests. Eventually, however, the Italians managed to pop the plug, a release of emotion as they were finally able to celebrate being the first world champions in the mixed two-man offshore competition.

Rossi shared his feelings after hearing the result. â€œIt’s an amazing feeling, it’s like a dream come true. We fought until the end, but then we had protests to discuss, so it wasn’t really easy. now we can just feel good and party together because we have a great race and great teamwork together. “

The 29-year-old Rossi is exactly half the age of Pietro D’Ali, one of Italy’s most experienced and respected offshore competitors. D’Ali commented: â€œTo come back to ocean racing in this event, after the Solitaire du Figaro and the Transat, it’s a pleasure to sail again. I hope this format will continue in the future. It’s a perfect format for the Olympics. “

The other Italian team finished second, ITA2 Marina Militare ridden by Giovanna Valsecchi and Andrea Pendibene. Two winning Italian teams at home do not tell how close this championship was between the 10 teams representing eight nations. The Belgian team (Sophia Faguet & Jonas Gerckens) ran the winners very close for the victory in the general classification but had to settle for third place in the general classification.

The South African team, made up of Michaela Robinson (21) and Siyanda Vato (28), came in fourth place and surpassed their lack of experience at sea. “We spent 11 years racing each other. against the others, “said Vato,” but this was the first time we have raced together. We worked really well together as a team, we achieved a lot more than we could have dreamed of., a lot of positives! “

Two of Michaela’s siblings, Brennan and Catherine, left the UK early in the morning to create a family surprise on their younger sister before she returned to South Africa. The same goes for Lennea Floser of Team Sweden, who was delighted to see a number of her family waiting on the quayside in Venice to welcome her ashore. Her younger sister Josefin was overflowing with pride in Lennea. “So amazing. I’m so proud of her. She always achieves new goals and she always moves forward, never backwards. It’s very impressive what she has done.”

In front of the Italian Secretary of State for Defense, the awards ceremony took place at the Arsenale di Venezia, a brilliant conclusion to a whole new world championship format.

What type of boat is most likely to have a planing hull?