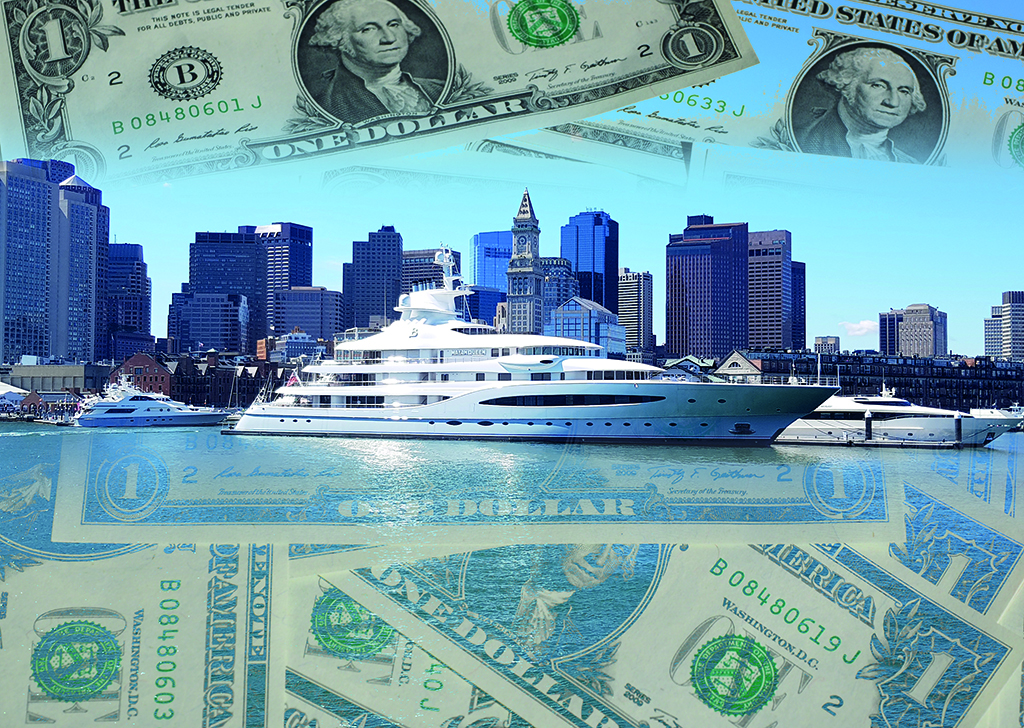 SUPERYACHTS have been the refuge of the super-rich during the Covid-19 pandemic.

As ordinary workers around the world have suffered the economic effects of several lockdowns and others, especially in healthcare, saving lives or even risking theirs, the rich have taken to the seas to escape the lockdowns and travel restrictions.

Much of the travel and entertainment industry has been severely curtailed by governments closing their borders or imposing quarantines on arrivals.

However, superyachts, which largely operate in international waters, are often exempt from state restrictions.

According to Boats International, the sale of superyachts defined as vessels over 24 meters in length and requiring a crew has increased rapidly since the summer of 2020.

They can be up to 180 meters in length with prices even for used vessels starting at $ 10 million, going up to $ 600 million when new.

In May, with most countries around the world still in some form of lockdown, Amazon and Blue Origin owner Jeff Bezos bought a $ 500 million superyacht with his own “support yacht.” and a helipad.

During the first wave of the pandemic, Hollywood billionaire David Geffen informed his Instagram followers that he was “isolated in the Grenadines by avoiding the virus”.

What Geffen didn’t say, however, was that he was aboard his $ 590 million superyacht The Rising Sun, complete with a movie theater, basketball court and wine cellar.

The rich spent £ 1 billion in the first five months of 2021 alone on superyachts – a number that would be enough to vaccinate the entire population of Nepal against the coronavirus, something Oxfam has called ‘obscene’.

As lockdowns have wreaked economic havoc across the world, the divide between rich and poor is increasingly illustrated by sales of superyachts. According to Forbes, there are now 2,755 billionaires, or 665 more than last year.

Superyachts also need a crew to work there, with a superyacht crew costing an average of $ 200,000 per year. However, as reality shows like Below Deck have shown, a subclass of the super-rich like Bezos and Geffen hire these ships for short-term cruises.

These charters, as they are called, increased 340% during the pandemic.

While the super rich owners were able to weather the pandemic and associated bottlenecks in luxury at sea, things were more difficult for the crew.

However, the Nautilus International maritime union has supported its members throughout the Covid crisis.

Strategic organizer Laura Molineux is keen to point out that Nautilus’ spectacular workforce growth among superyacht workers predates the pandemic.

This included meeting and recruiting new members at boat shows and using video technology to stay in touch with them at sea.

“We have experienced 250% annual membership growth in the superyacht industry over the past three years and over 60% of our new marine industry members work on yachts,” she said.

“We have seen an increase in membership in the midst of the pandemic as the crew sought safety in a time of uncertainty.

“Word of mouth is vital, the Superyacht department consistently receives positive feedback from our members, and we actively encourage members to spread the word among their colleagues.”

According to Molineux, at the start of the pandemic, Covid-related restrictions impacted crew mobility as well as wages as some workers lost their jobs.

“Travel restrictions, quarantines and social distancing restrictions aimed at containing the virus all had an immediate impact on the crew attempting to rejoin the ships, as well as the existing crew aboard.

“The different requirements for each country and the constant changes have hampered the exercise of the fundamental rights of seafarers in the Maritime Labor Convention (MLC), including the right to repatriation and the right to take annual leave and Earth.

“We have seen temporary pay cuts and members being asked to take unpaid leave or have their employment contracts terminated. ”

In such a globalized and international industry, border closures have caused major problems in a region that depends on a global workforce.

Crews often work in the Caribbean from October to April, then in the Mediterranean in summer, a pattern which, Molineux explains, has been greatly disrupted.

“There were obstacles for crew members trying to get visas from US embassies. Many did not schedule appointments except in an emergency, which meant the crew was unable to get to work for the Caribbean season.

“The international crew – requiring Schengen – also encountered difficulties due to the closure of embassies, and the crew with existing expiring visas struggled to obtain extensions from authorities due to restrictions. “

Nautilus has prepared information for members to advise them of the exemptions from the Covid travel rules which, as Molineux points out, allowed the superyacht crew to plan their trip to and from the yachts.

“Some countries, like England, Scotland and Wales, have exemptions from travel bans if you are a seafarer. We have prepared an article for the Nautilus Telegraph which provides links to all the latest travel tips and exemptions for the most popular travel destinations so our members can be confident in organizing their travel plans.

Salaries have also been an issue throughout the pandemic, with yacht owners sometimes withholding them during the mandatory crew quarantine period.

Molineux explains how Nautilus was able to direct its members to maritime advice they could use in wage disputes with owners and managed to recover £ 700,000 in wages for 50 members.

“Some crews found that their employers withheld wages during mandatory quarantine periods or required the crew to use their annual leave accrued for those periods.

“Nautilus was able to refer employers to flag state guidelines which stipulated that the crew should be considered ‘on duty’ of the ship during these periods and, as such, be entitled to their wages.

“Thanks to this support, the members were able to see their wages restored for these periods. “

During the pandemic, superyacht workers faced long periods of quarantine, contract extensions due to travel bans resulting in long periods of estrangement from loved ones, and yacht lockdown during outbreaks of Covid on board.

These issues have all raised concerns about the mental health of the crews. Molineux says Nautilus responded with a health and assistance app as well as an emergency helpline which saw a 145% increase in calls in 2020 compared to 2019.

“Many of the crew were facing contract extensions and travel bans, which meant not being able to see family and friends for long periods of time.

“In addition, local restrictions in ports meant that the crew was limited to a localized travel area. When there is a Covid outbreak on board, it can also result in confinement in small areas of the ship or in a quarantine hotel.

“Shore leave is vital for the mental health of crews and restricting these freedoms clearly has a direct negative impact. Strategic yacht organizers can offer a listening ear and practical support during office hours, and outside of hours our members have free access to our 24/7 support service.

Nautilus also offers its members free access to the My Healthy Advantage app, a service that can offer confidential 24/7 support, including – but not limited to – health assistance. and wellness, including psychological support to combat stress, anxiety and bad moods.

Although the crew largely covered the cost of the Covid testing by their employers, a potential problem developed with vaccines after reports that the crew were offered vaccines by the shipowners. Molinueux highlights the updated advice that Nautilus can provide.

“We are providing links to the World Health Organization website for more details on Covid-19 vaccines, as many have concerns about the safety of the vaccine being used.

“We can recommend that the employer help the member get the vaccine administered in their home country – however, this is not always practical, as many vaccines are usually given eight weeks apart.

“We recommend that they only accept a vaccine that is authorized for use in their country of origin.”

The billionaires spending fortunes on superyachts during the world’s worst pandemic in a century are the nautical equivalent of rich countries hoarding vaccines from the poorest.

It is emblematic of the greed and selfishness inherent in the capitalist system which promotes such extreme inequality.

Unions can only tackle such excesses as part of a larger movement, but the work Nautilus has done with superyacht workers is a great role model for unions in a post-industrial world.

Trade unionists of tomorrow are much more likely to work in the knowledge economy or the leisure industry.

They could be doctoral students teaching on precarious contracts, fast-food restaurant workers, video game designers, cruise ship workers, freelance journalists or even superyacht workers. Unions will need to change and modernize in order to hire a new generation of post-industrial workers.

Interview with Keiran Searle on the 2021 Melges World Championship regatta