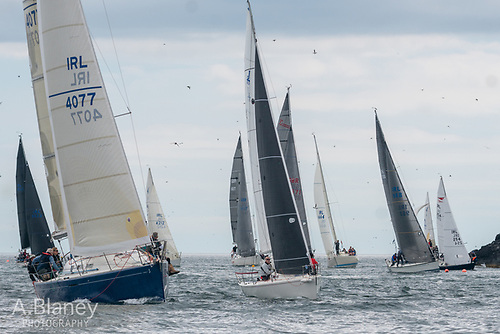 The official races of the club having only been authorized since Monday, June 7 and many development programs delayed by the atrocious weather in May, the realists were hoping for a participation of around 40 boats for the major opening event of Howth YC. As you move forward into the 2021 season, Saturday’s annual Lambay race, which has been further restricted in number by being billed as a club-only event.

However, a small miracle took place at the peninsular port of Fingal. The weather turned summery as the week progressed, the mood improved with, and with the inspiration of, five of the venerable Howth 17s running the club’s first “official” race in some time at 10:30 am on the Bank Holiday Monday. Monday June 7, clearly everything that moved, floated and set sail was needed to go out and party with the Lambay circuit.

The Howth 17s gathered 12 boats and found a ray of sunshine for their start, with Peter Courtney’s Oonagh (17) and the Turvey brothers’ Isobel winning at the end of the line. Photo: Annraoi Blaney

This was only slightly hampered by the wind which managed to blow in all directions between southeast and west during the race, while – aside from the occasional flash of light – the sun stayed behind the clouds until the end of most of the race. But at least it was almost always windy, and it was a warm breeze on top of that, which made the intricacies of getting around the island – in addition to many other set course challenges – a smooth affair even when you were doing it. the wind.

IRC 2 to the wind with Half Tonners King One and Mata trying to make their way past the X302 Xebec. Long ago, King One was the half-ton world champion in possession of quadruple Olympic gold medalist Paul Elvstrom of Denmark, and now – as a member of the Kelly Stable – she has won the class around. from Lambay. Photo: Annraoi Blaney.

Unsurprisingly, the biggest turnout – 19 boats – was in the non-spinnaker class, where some cruise ships that hadn’t raced in years were caught in the mood for surprisingly sharp performances.

Of the one-design classes, the Puppeteer 22 had gotten rid of cobwebs enough to have a turnout of 13, with the Howth 17 following in line with the round dozen, while the three hot IRC classes all gathered from good quorums with one of the results that will make the directors of J Boats Europe purr with content.

The Half Tonner Mata (Wright brothers & Rick DeNeve). If you want to succeed in the Lambay race, exclude any marine bird watchers from your crew, as their concentration will almost immediately be elsewhere. Photo: Annraoi Blaney

The Half Tonner Mata (Wright brothers & Rick DeNeve). If you want to succeed in the Lambay Race, exclude any marine bird watchers from your crew, as their focus will almost immediately be elsewhere. Photo: Annraoi Blaney

All results are here in detail, while the headlines were:

The Lambay Lady Trophy goes to the boat with the greatest margin between first and next in class, and early reviews suggest Colm Bermingham’s Elan 333 Bite the Bullet (White Sails IRC) wins at 11 seconds behind. Zarquon (M & J Wenski), but some classes using the Coptic Orthodox PH system may still offer a larger margin.

Storm is back in town …… the Kelly family’s best-selling J / 109 Storm returns to the race, with the unmistakable and jobless Ringsend Chimneys very visible across the Sutton Isthmus. When the piers were first built in 1974, everyone objected to “those horrors”. Now that they are redundant and that the powers that be expect to bring them down, everyone opposes the “wanton destruction of these much-loved monuments”. Photo: Annraoi Blaney