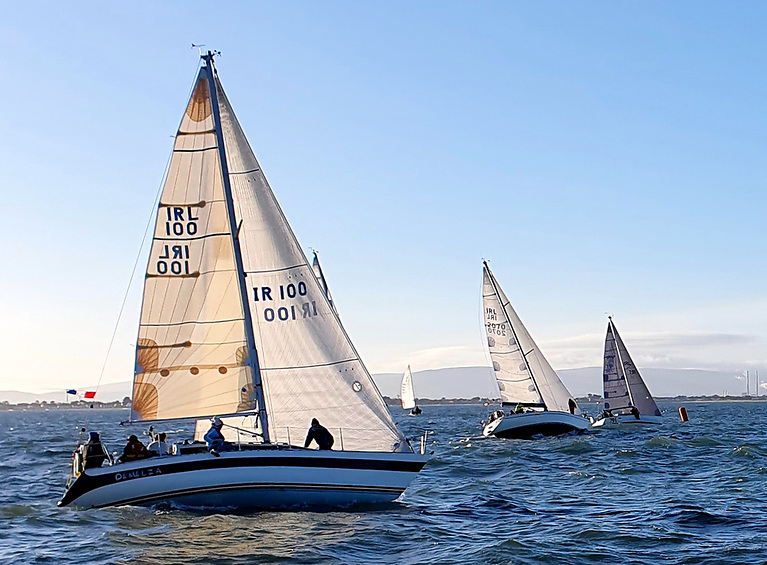 Yesterday (Sunday) in Howth for the Bright Motors Brass Monkeys Long Fall League and the even longer KeyCapital Laser Frostbites, PRO Derek Bothwell and his team actually wondered at dawn if a high ridge obliging pressure, who was bringing in a classic pet day, might exaggerate his benevolence to provide calm.

But as a member of the race team management, HYC vice-comodore Neil Murphy laconically reports the race: â€œSun, wind around 15 knots from 290 and a really big spring tide running. on reflux. Twenty-one boats racing in the three keelboat classes â€.

A good start for Steffi & Windsor in the veteran Club Shamrock Demelza â€¦â€¦ ..

Marauders might add that the air was like chilled champagne, although the numbers of the keelboats (mainly Howth, but from four different clubs on the East Coast) do not reflect the series’ initial larger entry, as some boats that weren’t with a last chance on the podium had seen key elements of their rearguard get involved in the acquisition of Christmas trees ashore and the purchase of gifts as a preventative measure in the face of the restrictions looming Tuesday.

But for those who entered this fifth race to keep the series on the schedule, conditions were perfect, and in Class 1 HPH Peter & Declan McCabe’s Arcturus (HYC) confirmed a solid lead in the overall standings with another victory to place it on 7 pts OA at the 15th of Dehler 34 Voyager (HYC) of Joe Carton and the 18th of Helm’s Deep (Paul Harrison, Skerries SC).

Class 2 HPH has Pat O’Neill’s J / 80 Mojo maintaining the winning form they were showing in Denmark this summer, as although third in this fifth race (which was won by Simon Knowles’ J / 109 Indian ), Mojo has never been below 5th place to set up a useful production model in a 13-boat entry, and so she sits on 17 points against 21 from Mark McLoughlins J’us, with Holly Quinn running the J / 97 Lambay family rules tied on 21 points, but regaining a spot in the tie-break.

J / 109 Indian of Simon Knowles, winner Sunday, sweeping Howth Sound on the ebb of the locks.

Particular interest is added to Class 2 as the five HYC-owned J / 80s race under charter for likes like Darren Wright and Dave Cullen, who have learned some of the windiest days that there is more to keeping a fully dressed J / 80 under its mast than on one of their own Classic Half Tonners.

As for the Class 3 HPH, veteran Club Shamrock Demelza (Steffi & Windsor HYC) has won for more than forty years in Cork and Howth, but even if – despite a good start – she finished second on Sunday, when the winner was Kevin O’Byrne’s Mary Ellen, Demelza continues to lead the overall standings with the Douglas / Keane Shenanigans (Malahide YC) with both over 12 pts, while the 50 year old racing classic Swan 37 Bandersnatch (brought new to Howth in 1971 by Ross & Peter Courtney) is third with 21 points for longtime owner Kyran O’Grady of Wicklow SC.

The Brass Monkey Keelboat Series moves on to Saturday for their final Series 1 race this weekend (Saturday 11 December) followed by the Social Distancing Awards (the traditional lunch would have been a standard Cheltenham Super Spreader), but the lasers will continue for another week.

While the Keelboats may have felt quite satisfied attracting an entry from four different clubs, they are only in place of the ha’pennies compared to the Lasers, whose annual long winter streak (it dates back to 1974). has this time drawn in the entries of eleven Leinster clubs, and the top eight in the Standard Division reflect that. The current leader after nine races is Ronan Wallace of Wexford on 7 pts, second is Daragh Kelleher of Skerries on 15, Conor Murphy maintains the honor of the host club with third place overall for Howth (23 pts), Tom Fox of Rush SC is fourth on 28, Dave Kirwan (Malahide) is fifth of 34, Dan O’Connell (ISA) is 6th of 45 and Richard Tate (RStGYC) is seventh of 52 before another HYC sailor appears with Conor Costello eighth out of 53.

However, the Laser Radials are HYC all the way, with Charlie Keating leading Fiachra Farrelly and Cillian Twomey, giving a glimpse into the future that is also reflected in the provision of racing for the RS Aero, where John Phelan leads from Paul McMahon and Daragh Sheridan.

Far from Derrynane – Dan O’Connell on the run in Howth

How things are going to be next weekend after Barra, God only knows, but the Howth Happy Race team can already say ‘We have a series, we have a result’.

The RS Eros are also in the race, and Paul McMahon (pictured) is currently second overall