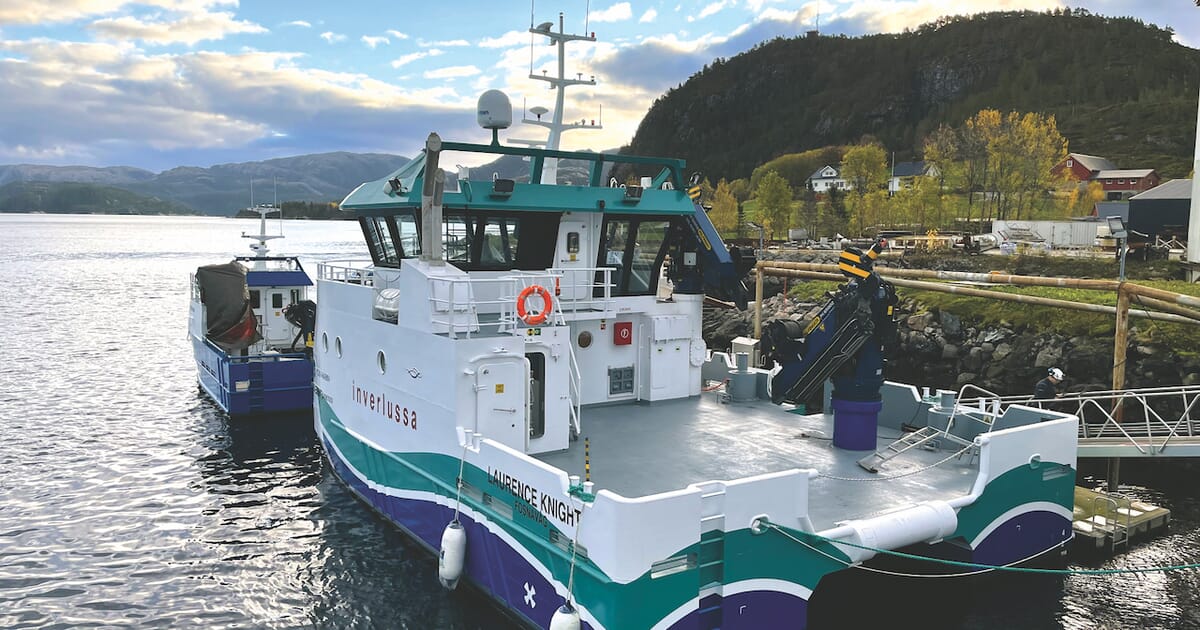 The boat, which will run primarily on its batteries, marks a “milestone” in terms of reducing carbon emissions and saving costs, said Inverlussa chief executive Ben Wilson.

“There are similar hybrid ships in Norway and we thought it was a good time to introduce this technology to our Scottish customers, who are committed to reducing their environmental impact,” he said in a statement. hurry.

The boat can perform farm tasks for five to six hours without recharging its batteries at one of the two generators on board.

This means that the generators do not need to be running when the boat is moored alongside a salmon pen, to help with a harvest or setting up a net, for example.

And without the demand for a generator at night, noise will be reduced, along with diesel fuel consumption and the ship’s carbon footprint.

For Scottish Sea Farms, the new vessel will help achieve CO2 savings of approximately 234 tonnes per year, as well as a potential reduction in fuel costs of up to 50%.

The batteries, with a total capacity of 244 kWh, can drive cranes and all other energy needs, including rocking back and forth from shore. As soon as they need to be recharged, the generators turn on automatically and they can also be recharged from shore power.

With the new boat, data can be collected from the batteries for analysis on land. Technology allows Scottish Sea Farms to manage each individual cell in the battery pack to get the most out of it.

The batteries have an average lifespan of 16 years and are also 100% recyclable. And in another smart eco-friendly measure, the water used to cool the batteries is recycled to help heat the four cabins.

Scottish Sea Farms Regional Manager for the Continent, Innes Weir, said the boat will instill confidence in the future of hybrid technology across the company.

A hybrid power test currently underway on the supply barge at the company’s Spelve farm in Mull has “opened the door,” Weir said, saving about 83 tonnes of CO2 a year in its prime and showing how technology can work. But the new workboat goes further.

â€œThe system we have at Spelve is to collect something other than feed the fish. Whenever we need food, we turn on the generator.

â€œIf we can operate a fully electric hybrid system, with generators only used to recharge the batteries, we can deploy it on our estate, on the barges and other energy-rich areas that we want to hybridize. ”

The Laurence Knight brings Inverlussa’s fleet to 17 ships and five new jobs have been created to equip the boat in teams.

Wilson added: â€œI think this type of vessel will become more common in the Scottish salmon farming industry as producers seek greener solutions. It’s an exciting project and we can’t wait to get it started.