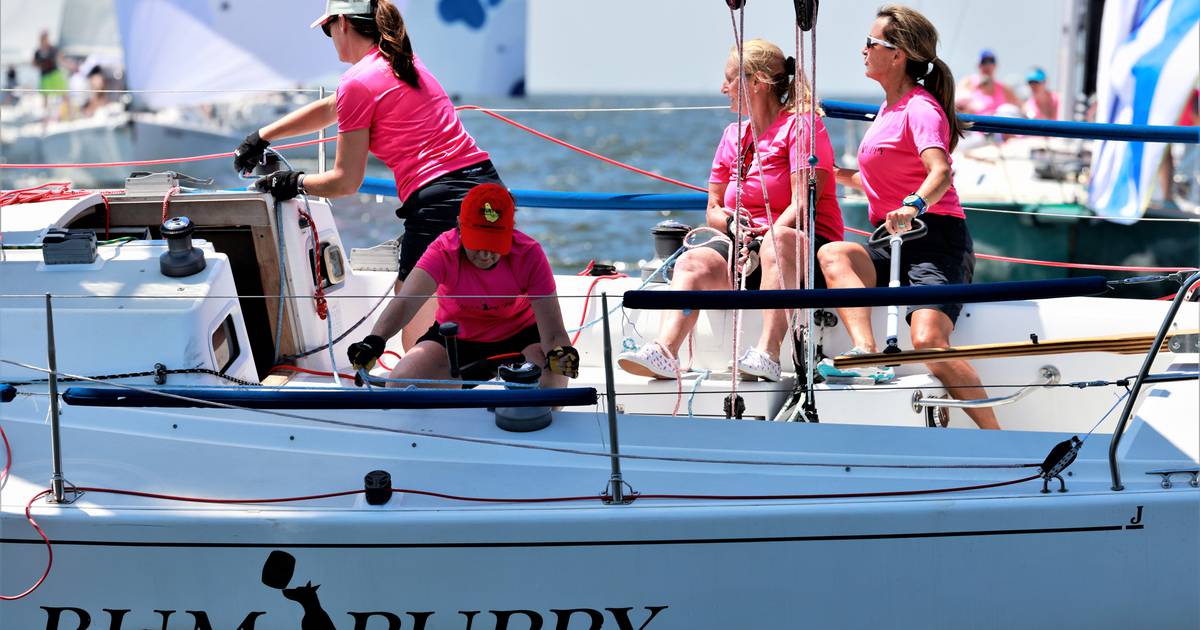 Molly Wilmer raced in the J/105 class for many years as a crew member aboard Mirage, the Annapolis-based boat co-owned by Fredrik Salvesen and Cedric Lewis.

Wilmer has long been impressed by the fact that most J/105 crews are mixed-gender with many crews made up of multiple women on board.

Wilmer has also served as chair of several women’s regattas in the past, including the Rolex International Keelboat Championship in 2003 and the United States Junior Double-handed Championship for the Ida Lewis Trophy.

These qualifications and connections made Wilmer an obvious and logical choice to serve as the primary organizer of the inaugural J/105 Women’s Regatta, held June 25 in Chesapeake Bay.

By all accounts the regatta was a resounding success with 13 teams of 85 sailors competing, the owners of the 3 J/105 fleet lending their boats and the Sailing Club of the Chesapeake proving a gracious host.

“When I heard it was in the works, I wanted to bring to this regatta what was special about others I’ve been involved with: top-notch competition coupled with a welcoming environment for new riders, a sense of camaraderie and sportsmanship, the opportunity to learn and share and, most importantly, to have fun,” said Wilmer.

Outdoor columnist Chris Dollar writes of the recently put in place crab restrictions: Everyone has an opinion on why blue crab numbers are low and how to fix the problem.https://t.co/sKOBB0n2uU

Of course, Wilmer also hoped to build momentum for the future with all attendees wanting to return next year, while spreading the word among friends.

“Watching the smiles on everyone’s faces, seeing the reunions, the introductions and the connections made, I think we accomplished everything we set out to do,” said Wilmer, who was encouraged to hear talk about the commitment that so many women’s teams have shown in preparing for the regatta.

Marie Klok Crump rode Good Trade to victory in all three races to claim first place overall. Klok Crump is an accomplished sailor, having previously been ranked No. 2 on the Match Race Women’s World Tour. The Annapolis resident is a two-time Danish national Match Race champion and rode an Olympic campaign in the Yngling class in 2004.

It didn’t hurt that Klok Crump had considerable experience racing a J/105, as she and her husband Will, as well as her sister, once owned one. Good Trade owner Peter Bowe was on board as chief trimmer and Mike McNamara worked the mast. However, the rest of the crew was made up of women, with Erin Bak at the bow, Madeleine Schroeher manning the stand and Max Phillips trimming the headsails with the help of Tammy Kolbe.

“It was a great field of competition with great sailors who are worthy of driving, tuning or doing tactics at the highest level,” Klok Crump said. “While we posted a close of results, that doesn’t tell the whole story of having to work hard to keep second and third place boats at bay in every race.”

“It was a ton of fun and the caliber of racing was great,” Clary said, noting that after the opening race the competition was going to be intense. “The focus and hard work of my crew was at one of the highest levels I’ve sailed with in a while.”

Drew Mutch of the Sailing Club of the Chesapeake served as lead race officer and easily completed three upwind races in consistent 5-10 knot southerly winds. A strong ebb current, caused by the recent opening of the 10 Conowingo Dam gates, was a factor.

“Despite aggressive maneuvering and tight workarounds, no protests were filed,” Mutch said happily.

There was a large crowd of spectators with husbands, children and other family members of the participating women who came out to watch the action. Many crews wore color matched jerseys which added recognition and flavor to the fleet.

Katie Zimmerman and her team aboard Firebrand finished second among eight all-female teams. Sandra Libby skippered her family’s J/105 Doghouse and proudly announced at the award ceremony that her entire crew was made up of women aged 50 or over.

“Our team really enjoyed the whole event and just wished we had more than three practices,” said Breakaway skipper Amy Harris, who was still getting used to driving the one-design. “Next year, I hope to be able to skip some races on Wednesday evenings to train. That’s what it’s all about – giving women the confidence to carry on as crew and as helmswomen.