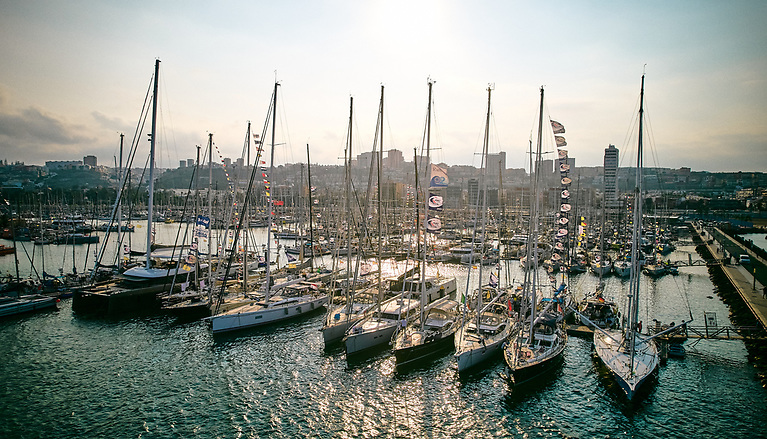 Cruisers, racers and multihulls; elegant offshore racing machines alongside comfortable family cruisers; superyachts with professional crews and enthusiastic friends living the dream – it was boats and sailors. With a crew representing 38 different nationalities, the ocean crossing community has filled the docks at Las Palmas Marina over the past two weeks and yesterday’s departure sees 141 yachts and nearly 900 participants now heading to the Caribbean island of Saint Lucia. Stretching out on the horizon, the fleet of white sails put on an awe-inspiring spectacle as the crews bid farewell to Gran Canaria for a great ocean adventure.

The Oyster 625 Ruth II of Liam Shanahan of the National Yacht Club of Dun Laoghaire and the Hallberg-Rassy 40 Viente of David Kelly of Waterford both made successful starts for the rally.

The sun was shining on the marina as the crews made their final preparations to set sail. From Waterford, Ireland, Kelly was loading up some last minute provisions (beers for their arrival in St. Lucia) and on the morning of departure said: â€œWe are all ready and our crew of six have been preparing for this day ever since. which seems like an eternity. It all comes down to fantastic excitement and we just want to go now and can’t wait to see everyone on the other side. It was an incredible farewell atmosphere as the harbor gradually emptied leaving the pontoons bare for another year. The Gran Canaria Tourist Board, the Port Authority of Las Palmas and the Ayuntamiento de Las Palmas de Gran Canaria have been wonderful hosts for the ARC participants over the past two weeks.

Before departure Kelly said: â€œI thought RCAF meteorologist Chris Tibbs was very clear that if he was sailing this year he was going south, so that’s where we’re going. ! Now we can’t wait to finish all the preparations, get out on the water and start enjoying all the food we bought – and of course start sailing!

In the departure area, the wind was blowing regularly at 12 to 15 knots from the southeast as the fleet prepared for an atypical ARC upwind departure. The first start, at 12:30 local time, was for the Multihull and Open Divisions, with Outremer 51 Moxie (USA) in the lead. In recent years, it is the dashing multihulls that have taken line honors at Rodney Bay, and previous winners BanzaÃ¯ (FRA), Guyader Saveol (FRA) and Minimole (ITA) have all returned to the RCAF this year to earn beat to reach the rum punch first. A total of 31 catamarans and trimarans sail in the ARC, and the Open division’s non-competitive sailing includes the 38m traditional schooner Helena (FIN), owned by Finnish Sail Training.

Then it was the Racing division’s turn to position themselves for their starting streak. The wind eased slightly to 10-12 knots when the signal sounded at 12:45 p.m. and the 19 yachts set off with their sails set. The Racing division pits pros against amateurs, with a great opportunity to compete on the same ocean course. French sailing legend JP Dick is back for his fourth ARC crossing on JP54 The Kid for Ville de Nice (FRA) and will face a new monohull racing challenge of 12 Nacira 69 (ITA), an Italian carbon pilot with crew, and Cookson 50 Furiosa (EST). But it was the efficient cruiser RM1270 Grace LR (GBR) who got off to the best start, with skipper Chris Lewns positioning himself well on the line to lead the racing fleet far away, and The Kid for Ville de Nice crossing just after. Every year, Racing Division yachts offer the opportunity for less experienced people to join a charter boat, sailed under the watchful eye of a professional skipper, with many regular participants sailing the ARC as part of an annual running program. Harmony 52 Sao Jorge (GBR), skippered by David Pritchard and one of the two charter boats entered by the UK-based Sail Racing Academy, crossed the start line in third position just behind The Kid for Ville de Nice.

Finally, the largest fleet, the Cruising Division, entered the fray with 92 yachts starting their adventure. On board the committee vessel, ARC Rally Control began the final start sequence and the horn sounded to indicate the start at 1:00 p.m. The first to cross the line was Montana (DEU), a Swan 48 S&S of the German skipper Markus Bocks who was competing for the third time in the ARC. The procession then continued with boats of all shapes and sizes leaving Las Palmas in their wake. The horizon was quickly punctuated with white and black sails that could be seen from Avenida Maritima by the locals of Las Palmas enjoying a pleasant afternoon stroll in the sun.

The sailors are starting their Atlantic crossing serenely, and the wind will remain fairly light and variable for the first few days before the boats which take a route further south begin to pick up the trade winds. During the skippers’ briefing, meteorologist and oceanic sailor Chris Tibbs advised the boats to head south along the African coast to the latitude of Cape Verde before pointing their bow west towards Saint Lucia. .

The departure of the ARC fleet sailing direct to Saint Lucia means that a combined total of 208 yachts will cross the Atlantic under the ARC banner in November 2021. The ARC + fleet of 67 yachts (also with Irish boats) has left Mindelo, Cape Verde for their second stop. of their crossing last Friday, bound for Granada. Another 60 yachts will join the first edition of the ARC in January, setting off for the new year in a third Atlantic crossing rally organized by the World Cruising Club and sailing from Gran Canaria to Saint Lucia.

Before departure, the crews performed the necessary PCR test to ensure that they were going to sea without Covid and respecting the health protocols for their arrival in Saint Lucia. All ARC boats are equipped with YB Tracking satellite trackers, allowing family and friends to follow the fleet from the comfort of their own homes. Click here for the online fleet viewer

Most boats will take 18 to 21 days to complete the 2,700 nautical mile Atlantic crossing, arriving at Rodney Bay Marina, St. Lucia. Regardless of what time they touch land, each boat will be greeted at the dock by staff from the Saint Lucia Tourism Authority and the World Cruising Club with welcome rum punch and cold drinks. Skipper Brad Gangardine is from SoufriÃ¨re, Saint Lucia and will be returning home on Into the Mystic. â€œI feel great this morning,â€ he said with a big smile just before leaving the dock. â€œI can’t wait to get home and I’m about to make an amazing dream come true. I hope to receive the incredible welcome that all RCAF sailors will receive upon their arrival and I am sure I will feel good about what I have done. There is a full program of events at Rodney Bay for all RCAF crews, culminating with the RCAF awards show on December 17th.