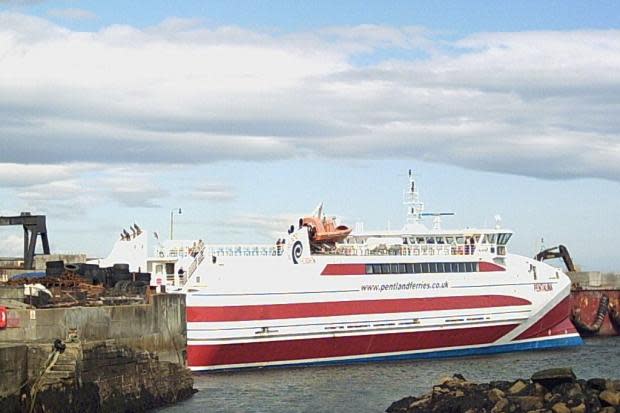 I NOTE your report on the latest state of the ferry crisis (“Documents reveal Scotland ferry crisis will cost £1.5bn to solve”, June 12).

An immediate improvement would result from the purchase of the Pentalina from Pentland Ferries, at a very modest price of £5-7 million. Given the average age of Calmac’s fleet, the idea that a ship launched 14 years ago is too old is laughable. The Pentalina is perfectly suited to the tracks of Arran or Mull, both crossings of less than an hour. She carries around 14 crew but without crew accommodation and a large catering staff, which are not needed on such short journeys. With two shore-based crew shifts, an 18-hour-a-day service could be achieved similar to that provided by Western Ferries at Dunoon. With crew costs per crossing halved, fuel costs reduced by around two-thirds and frequency doubled, service could be significantly improved at lower cost.

Building bigger and bigger ships that require huge infrastructure costs is not the answer. Ports aren’t getting any bigger, and while these large ships can make the passage in all weathers, docking safely is another matter. The maneuverability of the catamarans allows Pentland Ferries to operate a lucrative service in the worst stretch of water in the British Isles with minimal weather-related disruption.

Second, is there a contingency plan in case the Glen Sannox and Hull 802 is further delayed, or perhaps, as has been suggested, is not completed or not accepted by CMAL? Given the long lead times, most, if not all, equipment warranties will expire, resulting in increased costs and/or reduced reliability. If CMAL sought to refuse acceptance, it is likely that the Scottish Government, in order to save face, would force acceptance just as it forced the order of the FMEL ships without guarantees.

Third, we won’t have to wait until 2030 to solve this problem. The usual lead time for the supply of a bespoke vessel commissioned by CMAL is approximately five to six years. Pentland Ferries’ 98-car Alfred catamaran was delivered around 18 months after ordering at a cost of around £17m, maybe £20m today because these designs already exist. How many Alfreds for £500m? A policy change could solve the problem in a fraction of the time and at a fraction of the cost.

There are so many questions to explore. Why are the Scottish Government and Transport Scotland giving CMAL so much leeway to pursue grand and expensive plans? Why did the ferry advisory committee not meet for about two and a half years before it was disbanded? Was the advice given not to the liking of Transport Scotland and CMAL? The survey more than two years ago described the CMAL as not fit for purpose and questioned its relevance. At the end of the day, it’s about the management of taxpayers’ money, and that management has been lavish.

WITH the seemingly endless failures of Ferguson Marine, Calmac, CMAL, Caledonian MacBrayne and the “arm’s length owner”, the Scottish Government, isn’t it time to reflect and reclaim some of the shipbuilding reputation once proud of Scotland?

Instead of spending more money on the two hulks from the Port Glasgow shipyard, scrap them and get some money back. On second thought, salvage everything worth salvaging from the boats: two out-of-warranty motors, more than a few short lengths of copper wiring, and more. Then drag the carcasses down the middle of the Clyde and plant them upright, Antony Gormley style, next to the MV Captayanis, aka the Sugar Boat, all to show that common sense has finally prevailed by stopping wasting more funding on them, and as a reminder of one of the follies of the SNP during his tenure.

Take back the £20 million allocated to the upcoming “once in a lifetime referendum” fund, donate £500,000 towards the annual running costs of PS Waverly, £500,000 towards the works and running of the PS Maid of the Loch (both built at the AJ Inglis yard) and an additional £500.00 for the works and running costs of the SS Sir Walter Scott (built by Denny at Dumbarton. The remaining £18.5 million, and any additional earnings , can be paid to the NHS.

THERE IS NO MANDATE

NICOLA Sturgeon’s rationale for her ‘uncontested tenure’ is the result of the 2021 election at Holyrood. She forgets that she failed to secure a majority of MSPs and was forced to face the Greens, with all their baggage, to achieve the desired result. She is now using this as her main weapon to force another referendum on independence.

There is a huge flaw in his argument. Holyrood failed to elect a single Green MSP by first past the post and to make matters worse the pro-Union parties won 32% of the vote, the SNP and Greens 31% and a whopping 37% of the electorate didn’t vote at all. Given this, plus the fact that among those who did not vote, it can reasonably be assumed that many are pro-Union given the turnout and voting in 2014, then Ms Sturgeon’s main claim of a democratic majority falls at the very first hurdle.

The Supreme Court has nothing to do with it. It’s already over.

SUCH A WASTE OF MONEY

I note with interest and disgust that despite massive cuts across all sectors of the Scottish economy and society, the SNP is spending £20million on a new campaign for independence.

It’s such a waste of money. That £20million could be better spent on things like education, providing textbooks, pencils, musical instruments and teachers – or new ferries that don’t go over budget or that are in dry dock because they can’t operate due to even more wasted money.

Just think what railway workers, teachers, police and council workers and anyone you can think of could do with £20million.

THE TRADE UNION PARTIES ARE GROUPING UP

ANDY Maciver is absolutely right about his bleak prognosis for the Scottish Conservatives if they don’t form a new political party, separate from the English Tories – just as the Welsh Conservative Party predicts (“Douglas Ross’s only option is to create a new party”, June 12). The Scottish Conservatives are judged not only on the misbehavior of Westminster governance, but also on their policy (muscular unionism) of distant London ministers taking precedence over Holyrood.

Where I disagree with Mr Maciver is with his assertion that no other party in Holyrood would ‘work with the Tories, let alone support a Tory government’. We can already see in local government a putative British nationalist coalition (Labour, Tories and LibDems). I have no doubt that these parties would form a Red/Blue/Yellow coalition government if they could somehow garner enough elected officials. But without straying from drag anchors like Boris Johnson and Sir Keir Starmer, the dial looks stuck.

PROBLEMS WITH THE BREXIT DEFICIT

The use of the mantra of modernization seduces an audience delighted with the hope of improving its future economic prospects.

It carries much the same traction as the PM’s sunny highland reference to paint a picture of a rosier future. But beneath these two siren songs lurk hidden dangers that threaten workers’ well-being and economic prospects.

The story of the sunny highlands now returns as the achievement of Brexit has traded our trading relationship with the single market, where we once enjoyed preferential treatment, for the uncertainties of trying to strike deals with partners alternatives to fill the gaps left by skipping ship from EU.

Modernization usually leads to more mechanization and downsizing. This is very often accompanied by the generalization of lighter regulations, creating an increase in temporary contracts and a reduction in job security.

We are seeing these two developments in the Brexit deficit and the standoff between rail companies and their workforces.

No wonder we are nostalgic for what we had.

MISS A BEAT WITH ROLLING STONES

Reading the Spotlight article on the Rolling Stones’ current tour (“The Stones Deliver Certainty in a Chaotic World,” June 12), I was disappointed and surprised at the lack of mention of their new drummer. He was in the photo, but that seemed to be the extent of your acknowledgment of his existence.

I read the article several times just in case I missed a mention, but no. I would have thought that landing the role of the Rolling Stones’ new drummer, replacing the legendary Charlie Watts, would merit at least a line or two, but not even a name check. Why?

IN the heated debate over climate change, no one mentions the elephant in the room. Today, the world population is eight billion. A hundred years ago it was 1.9 billion. Then three billion in 1960 and 6.1 billion in 2000. By 2050 it could be 9.8 billion and 11.2 billion by 2100. Politicians spending trillions of pounds trying to cut gas emissions greenhouse as the population grows is like trying to empty a bath with a teaspoon while the tap is still running.