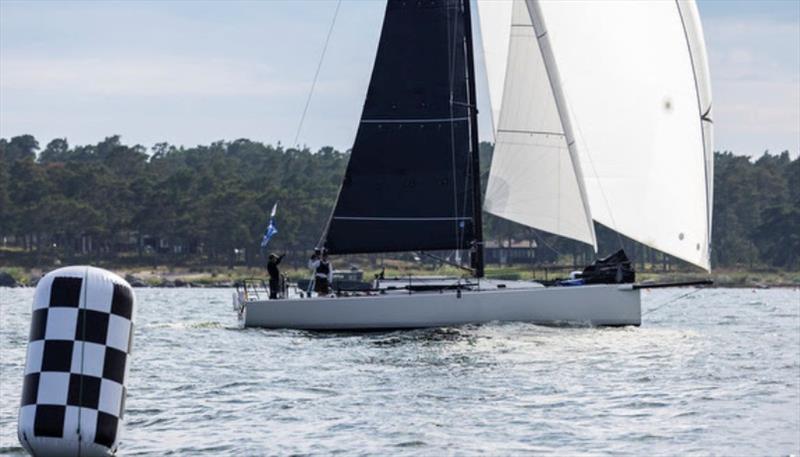 Gotland Runt is Scandinavia’s largest annual ocean race with around 200-300 participants each year. The start is in central Stockholm and the first 40.0nm of the 350.0nm race crosses the beautiful Stockholm archipelago before heading off to Sandhamn for the remaining 310.0nm around the island of Gotland and back to Sandhamn.

The race was canceled last year due to the pandemic situation and this year as well it remained somewhat uncertain to what extent the race could be completed. Thanks to some easing of government restrictions since July 1, it has been possible to run the race with nearly 200 participating boats provided that the starts are spread over two days.

“Our SRS Shorthanded class with 26 boats started on Saturday with the ORCi class, multihulls and classic yachts.

The weather forecast called for light winds from the northeast to the east, which meant that a light passed through the archipelago and then reached Gotland. Downwind on the east side of Gotland and a slight upwind / reach to Sandhamn and the finish line. Daylight saving time in Scandinavia means unreliable forecasts and very local weather, so with Gotland Runt you don’t really know what weather scenario you will end up with in real life. This year, the reality turned out to be not that far removed from the predictions.

On the morning of the race, the winds were from the northeast at 10 to 12 knots. The breeze should gradually come down in the afternoon in the archipelago and then pick up again offshore. After some discussions between the two of us, we decided to start with J2. Changing the headsail is an expensive maneuver in double-handed racing, especially since we have soft tangles on our jibs. Our plan was to go to J1 later in the day on a short stopover with code zero in free flight.

The departure was at 11:40 am for our class. With Jolene being the second biggest boat in the handicap class, we had to be in the lead. The only boat rated higher than Jolene was the German X-46 JuxeBox. We got off to a good start and managed to defend our lead against JuxeBox across the archipelago. After about three hours and many transfers, we made the planned change from J1 to J2. The breeze had then dropped to 2-4 kts at times and the additional power of the J1 was desperately needed.

At 7pm we were the first boat in our class to leave the archipelago and it turned out later that we were also in the lead at the corrected time, which we were very happy about. Smaller, lighter boats often have an advantage in light and crowded conditions in the archipelago, but our active navigation and focus on boat speed have paid off.

On the open sea towards the northern tip of Gotland, we had a TWA of about 120 degrees. and 10-13 knots of wind. For us that meant the A3 spinnaker. Leaving the archipelago behind us, we could now also take a well-deserved rest.

Double-handed offshore sailing is very lonely two-person sailing. Maneuvers, tactical decisions, sail changes are of course all done together. But in between, we try to rest as much as possible, with one person driving the boat while the other takes a nap. The one hour tours work well for us.

We had to make some sail changes overnight between A3, A2 and Jib Zero. We were at the reporting point at the northern end of Gotland around 6 a.m. on Sunday. Always in the lead. It is always a tactical challenge to decide whether to stay close to the east coast of Gotland or go further into the sea. In our experience, in the rather light conditions we were facing now, it is more likely to park with no wind at all close to land, so we decided to keep some distance. It was a nice comfortable downwind leg under A2 and a staysail to Hoburgen, which is the southernmost point of Gotland.

We kept a close eye on the AIS and the boats approaching shore and it looked like the breeze was a bit lighter there so our decision to stay outside for a bit was probably the right one. We did some gybing down to Hoburgen and passed the mark as the first boat of our class at 6.30pm on Sunday. We had a comfortable lead over JuxeBox (the X-46) and we had also managed to keep our closest competitors, the SunFast 3600 Groovie and Farr38 Pandion, a sufficient distance to maintain our lead also in corrected time.

Half the race distance was now behind us, but the hardest part was ahead of us. The final stretch to the west side of Gotland, rounding a mark just outside Visby, then back to Sandhamn and the finish line promised rough conditions with almost no wind at all overnight outside Visby. This is a very familiar situation for anyone who has ever sailed the Gotland Runt. And it turned out to be just as frustrating as we had feared. The weather route suggested that we stay as close to land as possible to Visby.

We started our way to Visby with TWA 60 and 12-13 kts of wind. Fantastic sail. Code zero, full ballast tanks and a speed of about 9 knots. We could see on the AIS that the boats ahead were really approaching the mainland. Very, very close bypassing the 3.0m depth curve. We have followed suit. The wind started to weaken in the evening and with some 20.0nm remaining in Visby we were at 1-2 knots of wind. We managed to avoid parking altogether, but it was frustratingly slow at times. Slowly the wind started to pick up again after midnight and we rounded the Visby mark at 3:50 am Monday morning.

The path from Visby to the Almagrundet Lighthouse was a range of 100.0 nm with a TWA of 95 to 115 degrees. with a wind speed of around 11 to 15 knots. Again we had our Code Zero in place and full water ballast for the entire leg and it was a drag race with the emphasis on keeping polar targets above 100% the entire time. long. Once we had Code Zero in place and in good shape, we could take turns and get a few well-earned hours of sleep.

We crossed the finish line late Monday afternoon and won line honors in our class. We also managed to keep our lead throughout the race in corrected time. A fantastic achievement and a very happy crew! ”