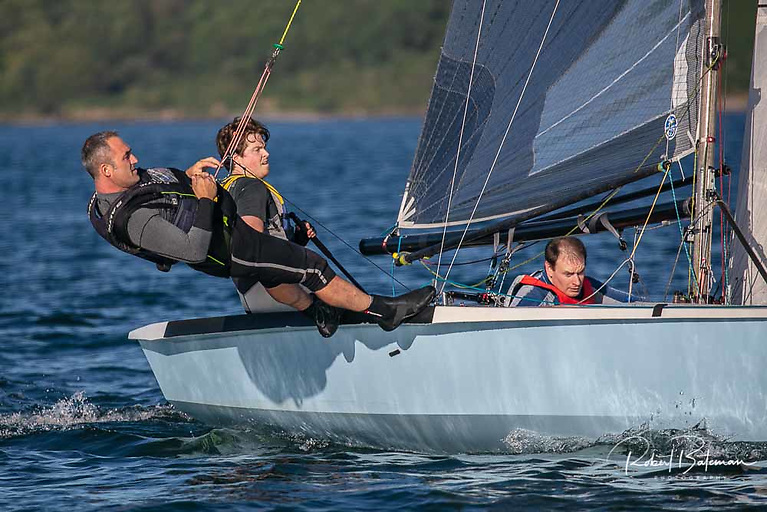 At the 301st AGM last Thursday evening, Kieran O’Connell was elected 43rd Admiral of the Royal Cork Yacht Club. In his acceptance speech, O’Connell thanked former Admiral Colin Morehead for the manner in which he has fulfilled his role over the past two years and guided the club through the tricentennial celebrations and the ongoing pandemic.

O’Connell, now entering his ninth year on the Royal Cork Executive Committee, has been with Royal Cork all his life, having started to sail in mirrors and in recent years competing in keelboat events and of National 18 across the country. Once appointed, he addressed the membership and reflected on how strong the club is today with membership at a ten-year high and particularly healthy finances. He briefly spoke about plans for the further development of the club’s facilities, including exploring lifting, maintenance and storage facilities for boats ashore.

The new admiral also stressed his desire to complete the club’s five-year plan, which will be essential to retain existing members and introduce new members to the oldest club in the world.

Following the success of the Youth Course Model, O’Connell highlighted plans to adapt the model to meet the needs of adult sailing, with the growing club fleet now comprising 20 keelboats and dinghies being key to introduce newcomers to sport in a cost-effective manner.

After a record year of club events, including several national and regional championships, the highlights of 2022 will undoubtedly be Volvo Cork Week in July and the 505 World Championships in August.

In his closing remarks, he stressed the fact that nothing could be achieved without the support and dedication of his staff and his amazing committees and volunteers.

O’Connell has formed an experienced and enthusiastic committee. Making history, Annamarie Fegan was elected Vice-Admiral of the Crosshaven Club, the first female Vice-Admiral in the club’s 302-year history. Fegan is best known in sailing circles as co-owner of the â€œNieulargoâ€ with her husband Denis Murphy and daughters Molly and Mia, winners of the Dun Laoghaire in Dingle, the Fastnet 450 and one of the favorites for the Round race. Ireland in 2022. Annamarie will also co-chair Volvo Cork Week 2022 with Ross Deasy.

Paul Tingle was elected Keelboat Rear Admiral and brings with him a wealth of experience having first started sailing in Mirrors and Enterprises and now sailing the family’s new X-4 “Alpaca”. Discussions about sailing are inevitable in the Tingle family, with the family taking on Olympic campaigns, Fastnet races, from Dun Laoghaire to Dingle and so much more in recent years.

Maurice Collins was elected Rear Admiral Dinghies, a considerable undertaking given the success and growth of the Youth Pathway in Royal Cork. Having served as a Class Captain in the Topper Fleet for several years and with four sons competing in all classes of the club, Maurice is perfectly positioned to ensure that there is something for all young sailors, from international competition at this first tack or jibe.

Denis Byrne was elected president of the Marina & Facilities committee. From the incoming admiral’s acceptance speech, it’s clear that Denis and his committee will have some exciting projects on the cards in the years to come. Denis has been nearly unstoppable in his Trapper TP250 ‘Cracker’ in the Cork Harbor IRC races for the past few years.

Mike Rider as Rear Admiral Cruising, Pat Harte as Treasurer and Alex Barry as Chair of Membership, Communications and Events remain on the committee for another term.

2022 starts off with a cold front and hopes that fishing will step up a gear; Tide times | Peach

“The Maltese are welcome in Sicily – for the right reasons”