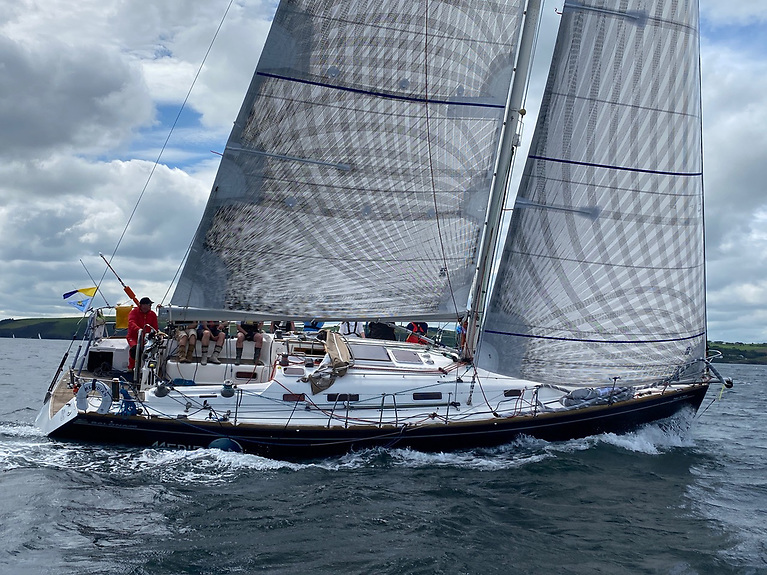 Some 49 yachts from 21 countries – including Ireland – have taken part in the first 606-mile Mediterranean classic so far.

Thomas Roche’s Salona 45 Meridian of Kinsale Yacht Club has entered the race which has seen a string of Irish boats compete in recent years.

Just over four months before the start of the 43rd Rolex Middle Sea Race on Saturday 22nd October, the organizers report that “the fleet is growing day by day”.

Composed of monohulls and multihulls, fully crewed and double-handed, and ranging from the 28-meter Orsa Maggiore (Italy) to the 9.98-meter Azuree 33 Nuestro (Italy), the competitors represent the broad spectrum of offshore navigation. At the same stage last year, a similar number had entered with the final fleet number reaching 114. The Royal Malta Yacht Club, the organizer since the first race in 1968, sees the current tally as a positive indicator of a another important participation in its flagship race.

The race for the first to arrive in the multihull fleet is looking good with the 24m Ultim’ Emotion 2 entered by Cosimo Malesci (Italy) facing off against the 21.2m Dutch MOD70 Snowflake of Frank Slootman (formerly Beau Geste and before Phaedo3 , which won line honors and set a multihull racing record in 2015). Ultim’ Emotion has competed twice before with a best result of third on the water in 2020. Although it broke the 2007 course record last year, it was beaten at the line by a triumvirate of MOD70 , with Argo setting an outright race (and course) record of 32 hours 23 minutes and 38 seconds in the “unique conditions”.

While Orsa Maggiore shouldn’t trouble the multihull battle to be first on home soil or the monohull race record of 38h49min 33sec, also set in 2021, the Italian maxi will be looking to be among the first monohulls to finish. The 24.89m Swan 82 Kallima (Switzerland) is another that will have the ambition to lead the monohull contingent and take advantage of it to score valuable points in the last event of the Swan Maxi Series 2022. Two other maxis have entered to date: Swan 65 Kings Legend (UK) for its third attempt to complete the course, and the Italian debutant Clipper 68 Grinta.

The main contest is, of course, for overall victory under IRC, and with it the iconic Middle Sea Race trophy. A glance at the list of entrants suggests the usual fierce competition for this coveted prize. Double winner Lee Satariano is back with his co-skipper Cristian Ripard on the HH42 Artie III. After two indifferent performances in 2019 and 2020, as the team took control of their thoroughbred steed, the Maltese crew finished second in 2021 in IRC 3, 10 minutes behind the winner (another HH42) and seventh general’s position. Another Maltese entry showing some form in recent years has been Jonathan Gambin’s Dufour 44P, Ton Ton Laferla. Third overall in 2020 and winner of IRC 5, Gambin finished just off the IRC 4 podium last time out.

Other names to watch include Ker 46 Daguet 3 of Frederic Puzin – Corum (France), third overall in 2021 and winner of IRC 2. Stefan Jentzsch’s new water ballast IRC56 designed by Botin Partners and built at King Marine seems like a great prospect too. Designed specifically for offshore racing, the IRC 56 is a step up from the Carkeek 47 that Jentsch raced in 2019, winning IRC 2. Another German crew also hopes to be in the mix, Carl- Peter Forster (who raced last year as Freccia Rossa). 2022 will be Forster’s fourth Middle Sea Race, the first in 1979 aboard Volker Andreae’s Inschallah. “I bought Freccia Rossa after the race last year and we renamed it Red Bandit,” Forster explains. “I donated the boat to a foundation (ForStar Offshore Racing) that I set up and funded with the aim of bringing talented young sailors to offshore racing.”

The 43rd Middle Sea Race will be the team’s fifth major event together. “The crew is made up of young dinghy sailors with mainly European and World Championship experience, as well as one with Olympic training,” advises Forster. “They are all under 35, most under 30.” As to why he’s coming back for another tilt on the course, Forster explains: “I love long distance offshore racing because it puts you in a different frame of mind. The Middle Sea Race is such a unique race with its difficult weather conditions – either little or too much wind – and the fabulous route around Sicily and the islands.”

The double-handed class is another area of ​​the fleet that is building up well, with real talent. So far, six entries have taken the pledge. Belgium, France, Germany, Italy and the United States are represented. Gerald Boess and Jonathan Bordas, crew members of Jubilee, the French J/109, are in some form after winning the John Illingworth Trophy for first place in the doubles class in corrected time under IRC in 2020 despite the disappointment of not finishing Last year.

Another French yacht that has the potential to step onto the podium is Ludovic Gérard’s Solenn for Pure Ocean. JPK10.80 has appeared three times before, twice as a full crew. In 2018, Solenn finished second in IRC 6, following that impressive debut by winning IRC 6 in 2019 by four seconds on corrected time. In 2021, Solenn for Pure Ocean finished second in the Double class and fifth out of 27 IRC 6 boats. they finished third in class. Marco Paolucci and the Italian Comet 45 Libertine have also been on the podium in past races. German sailor Chris Opielok is entering his third outing after two relatively successful full-crew forays in 2011 with his Corby 36 Rockall III and in 2015 with another Corby (38) Rockall IV. On his debut, Opielok finished second in IRC 4 and overall, beaten by just 30 minutes by hometown heroes Artie. In his second appearance, Opielok won IRC 4, defeating two-time winner, Elusive II in the process. Early season success in winning the 140nm Ruta de La Sal (Barcelona to Ibiza) suggests that Opielok’s latest Rockall, a JPK 1030, is a force to be reckoned with.

One of the most anticipated entries is Jonathan McKee and Red Ruby’s SunFast 3300 from the United States. McKee is a two-time Olympic medalist in the Flying Dutchman (gold, 1984) and 49er (bronze, 2000). He brings his experience from several America’s Cup campaigns and the 2008-2009 Volvo Ocean Race with Il Mostro. This will be McKee’s first appearance at this event. “I have wanted to take part in the Middle Sea Race for a long time. It’s one of the few classic ocean races I’ve ever done,” says McKee. “The course is really magnificent and very interesting tactically. There is usually a wide variety of conditions, from calms to gales. The event always attracts a top field, and I’m really excited.

As to why he’s enrolled in the doubles class, McKee is clear: “I love racing doubles because it’s a great challenge. Racing with just two requires every sailor to truly have a full set of skills. You have to steer, trim, sail, raise and lower the sails, all with just two sailors. It’s really fun, really direct, and it makes you a more complete sailor. We look forward to a very competitive race. McKee’s co-skipper is a young sailor from the Pacific Northwest of the United States, Alyohsa Strum-Palerm with whom he competes in the R2AK (full crew) (750 nautical mile race from Port Townsend, Washington to Ketchikan, Alaska).

Tips and how to get around