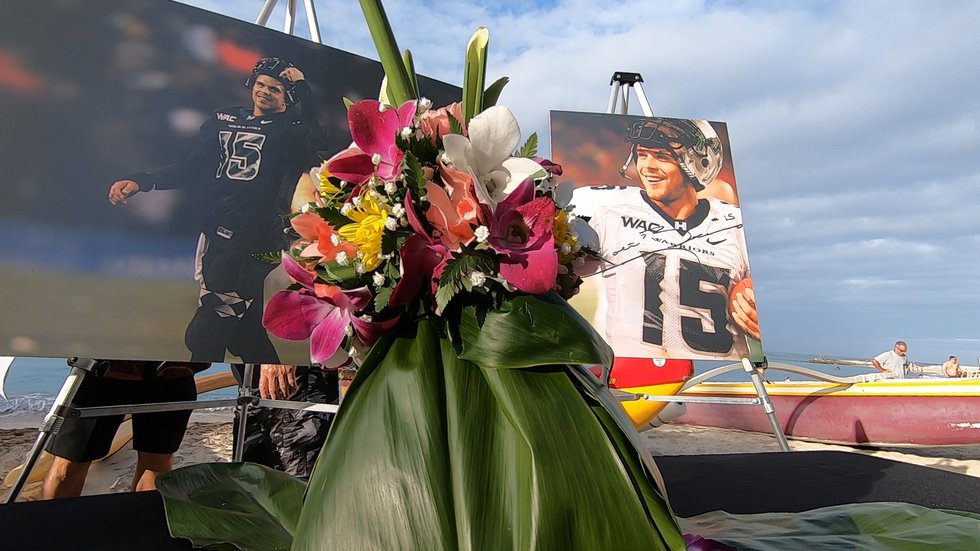 HONOLULU (HawaiiNewsNow) – Hundreds of people took to Waikiki Beach to honor University of Hawaii football legend Colt Brennan with a celebration of life hosted by the Brennan ohana.

The size of the crowd, showing Colt’s true reach in the islands – cementing a legacy that will never be forgotten.

The ceremony began with emotional speeches from former head coach June Jones, current Rainbow Warriors coach Timmy Chang, sister Chanelle Brewster and father Terry before they headed to shore, boarding on canoes to paddle, as well as many others on surfboards. and catamarans to deliver Colt to his final resting place.

“It was special, it was special because we had family and friends joining us who weren’t on surfboards or paddleboards.” Terry Brennan told reporters. “They were either in the catamarans or in the outriggers themselves.”

Colt will now forever have a home in the Islands, a special place for fans and family to reconnect with the Hawaiian sports legend.

“I know every time I come back here maybe I can see him swimming with him.” Colt’s nephew Mason Shey told Hawaii News Now. “Yeah I’ve seen him play games and I’ve always been told that I wish I could be like him and I wish he was still around because I haven’t really gotten to see him that much since that he was still in this beautiful place.”

Friends, family and fellow athletes came out to pay their respects to Brennan’s life at a public memorial on Sunday.

In addition to celebrating the life and legacy of No. 15, this morning’s ceremony also brought people together, which is what Colt did when he took UH football to unimaginable heights.

“An opportunity for us to celebrate Colt, but at the same time a lot of old friends and old faces can come together to do it together.” Former Colt teammate Nate Ilaoa said. “It’s something really special and awesome.

Despite some of Colt’s darkest days, his lasting legacy will be one of hope and redemption.

“He left the shirt better in a better place when he left the University.” Current UH head coach Timmy Chang said. “So we’re just happy to be able to honor that with our game.”

“Did Colt make mistakes?” Brennan said. “Yeah, he’s made his share of mistakes, and, you know, hopefully we can learn from that and help other kids who have mental health issues and challenges and especially addiction.”

While Brennan brought so much to Hawaii as the face of UH football for nearly three years, friends say he would take the time to sign autographs for fans and adjust to the culture he loved so much. .

After his time at UH, Brennan worked to try and give back to local football communities, volunteering with the Kahuku High School football team and a number of other youth organizations.

“He just had so much love and he was so humble, even with all the spotlight on him.” Timmy Lessons, a close friend of Colt, said. “He would go out of his way to do anything for everyone and that’s what I admired the most about him.”

Brennan’s friends and family say he enjoyed working with children.

To keep his memory alive, they’ve set up the Colt Brennan Legacy Fund to support youth sports and mental health organizations – hosting their first youth football clinic in Honolulu on Saturday and hope to make it an annual affair.