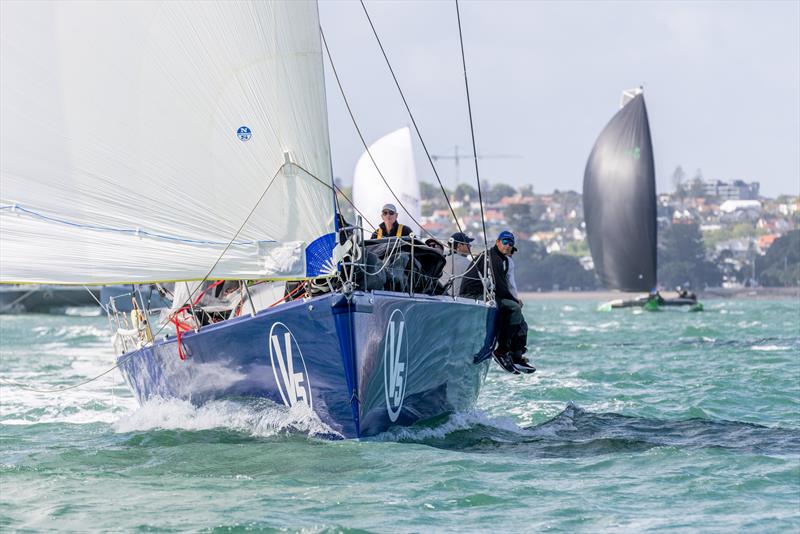 For only the second time since 2009, a monohull keelboat has won the PIC Coastal Classic.

It was a race with many changes of heads, not only between the best boats but also between the types of boats: the Transpac 52 workhorses, the big high-tech multihulls, the smaller nimble 8.5 multis and the Melges 40 with their huge sail area all took their turns in the front row and there was no clarity on who could cross the line first until the boats approached the finish line – even for those waiting on the arrival boat in the dark.

Keelboats took the top six spots in the PIC Coastal Classic. After the win for V5 Sassinate, the Melges 40 owned by RAYC’s first skipper Mikayla Plaw is second in line finishing at 23:49:4.

Wired was the third boat to finish. Wired is a Bakewell-White designed TP52 owned by Rob Bassett of RNZYS. Wired ended at 23:50:08.

Cat+ion is the first multihull to complete the 40th PIC Coastal Classic at 00:00:17 – just 14 minutes after the winner. Cat+ion is an 18.5m performance cat designed by Roger Hill and sails under the RAYC flag.

The conditions were both brilliant and frustrating. The race started in an appealing southwesterly of 15 knots, but that changed as the fleet approached halfway, with a new wind blowing in from the east battling the westerly breeze and creating an area forbidden where a number of boats stopped and waited, motionless, wondering where the next gusts of wind would come from that would send them north. In the end, those who opted for a straight line along the coast seemed to benefit. By midnight, the Easterly had settled in, providing a good return to the fleet for the fleet as it rounded Brett and turned southwest.

The last monohull to win the race was the great NZ Ocean Racing, in 2020 – and before that the supermaxi Alfa Romeo took victory – and a race record – in 2009.

The PIC Premier Coastal Classic is New Zealand’s largest coastal yacht race and one of the largest in the world. It started life 40 years ago as a drag race between Auckland and Russell for just a few boats, and over the years has attracted a larger and more diverse fleet, ranging from grand prix racers to small family cruisers.

The race site is www.coastalclassic.co.nz

Adventures by Disney launches expedition cruise in the Adriatic Sea