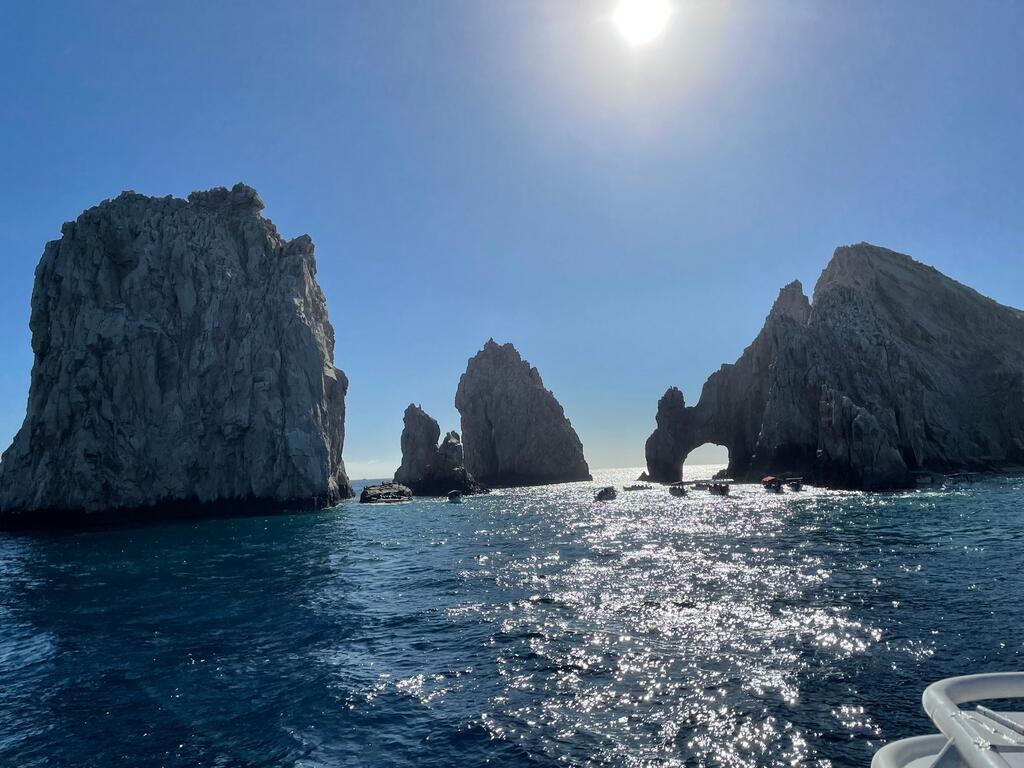 Our first port of call is Cabo San Lucas, although we don’t get there until noon.

My morning routine was the same as yesterday. Wake up before the kids, head to the pool deck and enjoy the fresh air while I catch up with the blog posts.

I immediately noticed that the temperature had warmed up considerably over the past two days and it was comfortable to be outside in shorts.

Once the kids got up we had breakfast in the Windjammer. We decided to go to the brainbuster trivia afterwards. Here’s a question: What begins with “e”, ends with “e”, and has a single letter?

The answer is envelope.

Navigator of the Seas sailed along the Mexican coast as we neared Cabo.

Cabo San Lucas is not a port where you will dock. Instead, guests take tender boats to shore.

We booked the Luxury Coastal Cruise for today which is a 2 hour water tour of the surrounding area.

We met at the Royal Theater and took a tender ashore before boarding a large boat for our visit. The tour classified it as a catamaran, but it looked like a giant tender boat.

There were 3 stops: the cliffside beaches of Land’s End, Lovers Beach, then the wildlife viewing.

We started out of the harbor and headed straight for Land’s End.

The rock formation is beautiful, although we basically saw it from our ship on the trip. Still, it was a closer look and included a sight of sea lions barking out a storm.

Around the rocks are beaches, including Lover’s Beach. If I were to come back I think taking a water taxi here would be fun.

At this point it was time for whale watching. During the winter months, humpback whales migrate to Mexico from Alaska to mate.

Drinks included mai tais, tequila sunrises and even shots. Kids can have soda, Shirley Temples, and any drink that doesn’t need a blender.

I was far from optimistic about seeing whales, but after half an hour we spotted our first group.

It was quite a distance, but I saw two whales come up a few times. By the time our boat arrived, they were gone.

I would have been quite happy with that, but then we found the pod two more times, including one time where they came straight in front of us.

It was amazing to see these whales up close, and my kids loved it.

The team did a great job keeping drinks and snacks on hand and played some fun music throughout the course.

It was a great tour, and I really liked it. The fact that we saw whales a few times was amazing and made the tour fantastic.

Once the tour was over, we were dropped off at the pier. I took a brief walk around the harbor, but it looked a lot like Cozumel, so we headed back.

The smooth return was fairly quick and no lines to contend with.

Back on the boat, we take a quick shower before heading to dinner.

Dinner brought us back to Izumi. My phone was charging in the room so no pictures of the dinner, but the poke bowl and sushi sampler were great.

Tomorrow we are in Mazatlan.

I found another weird Royal Caribbean dish in the Windjammer today, Firecrackers!

I managed to get the kids into Adventure Ocean today without a reservation. We got there when they opened, and after a few kids with reservations walked in, we were admitted.