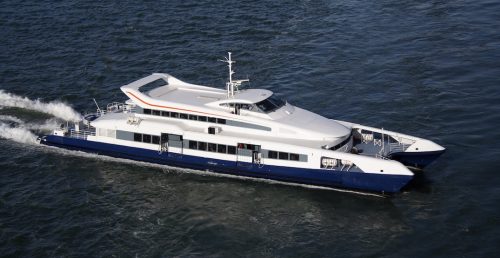 There will be a brand new attempt to launch a high-speed passenger ferry service from downtown Nanaimo to downtown Vancouver.

This week, the Nanaimo Port Authority and Snuneymuxw First Nation announced a partnership with Conqora Capital Partners to launch a new service connecting the downtown areas of the two cities.

A long-term lease has been entered into between the Port Authority and Conqora for the required access to the Nanaimo Assembly Wharf, located immediately east of downtown. The agreement covers ship berths, reception terminals, parking lots and passenger connectivity areas. Nanaimo’s existing Helijet terminal is also located here.

The First Nation’s participation recognizes its rights and lands and is committed to providing benefits to the band and its members.

â€œConqora is proud to partner with the Nanaimo Port Authority and the Snuneymuxw First Nation to provide this service to local communities. We are working together with a common goal of having a positive impact and growth within the communities that this partnership will serve, â€Rupesh Amin, Founder and CEO of Conqora Capital Partners, said in a statement.

â€œWorking with the Snuneymuxw First Nation and the Nanaimo Port Authority has been a great pleasure and I want to sincerely thank them for their honesty, commitment and shared vision for this service. Conqora is excited about the potential of this partnership and what this high-speed ferry service means for the future of the province.

Conqora is a Toronto-based private equity firm and, according to its website, focuses on real estate developments, transportation and digital infrastructure, renewable energy and smart technologies.

Details of the new service will be announced at a later date. The partnership has yet to announce a potential launch date for the service.

“After many years of talking about fast passenger service to Nanaimo, it is with great pleasure that the Nanaimo Port Authority announces our unique partnership with Snuneymuxw and Conqora First Nation to bring this vital service to Nanaimo” , said Donna Hais, president of the port authority, in a statement.

” To supply [the] the infrastructure that connects Nanaimo to the rest of the world is one of the port’s mandates, and we’re thrilled to be able to connect people through this mode of transportation.

This is the second time that the port authority has signed such an agreement in recent years, having entered into a rental agreement with Island Ferries, a different entity, in 2017 for a high-speed passenger ferry service from the same. dock location belonging to the port.

At the time, Island Ferries was also working with the Vancouver Fraser Port Authority and TransLink to lease an outdoor berth outside of Waterfront Station’s SeaBus terminal for its downtown Vancouver hub, an idea that the authority was seriously considering. of public transport.

But the launch of Island Ferries has been repeatedly delayed and suffered a substantial setback in June 2019, when it announced that some of its major investors had pulled out. There have been no updates from Island Ferries for over two years.

Island Ferries had previously said it had secured contracts from a Singapore shipyard to build two high-speed catamarans at a cost of $ 40 million. Each ship would have a capacity of 376 passengers and a maximum speed of 40 knots (75 km / h).

For its service plan, Island Ferries would make multiple round trips per day, with each one-way offering a journey time of just 68 minutes and a departure fare of just around $ 25 to allow the ferry to become a feasible option for travelers. commuters.

There have been a number of private sector attempts to launch high-speed passenger ferry services on the south coast of British Columbia over the decades, including the short-haul Harbor Lynx service. She went bankrupt in 2006 when her only catamaran with a capacity of 300 people suffered a fatal engine failure.

In early 2020, before the pandemic began, V2V Vacations announced it would shut down its business, after failing to maintain sufficient passenger levels for its focused high-speed luxury ferry service. tourists from a berth in Vancouver From the west building of the convention center to Victoria Inner Harbor. This service was first launched in 2017.

Wave’s latest 50ft catamaran was designed to turn heads, has a unique layout